Booked the hotel for the one and only night we will spend in Osaka. Initially I was considering the Namba Oriental Hotel but a last minute check on Tripadvisor pulled me towards Hotel Ichiei instead. 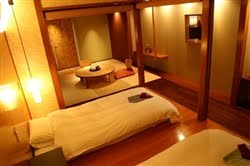 Their semi-western Japanese rooms look interesting. I booked one of those which can sleep three and another Japanese room which sleeps five. For 5000yen a night per adult and 4500yen per child, I think its reasonable.
The hotel is right on top of the Namba Nankai station, a mere 2min walk away. This places us right in the heart of downtown Osaka, near Dotonbori. We plan to spend the day either going up to the Minka koen in northern Osaka or just hanging around the downtown area. Having been to the Tempozan area and the aquarium the last time, we don’t want to revisit. Another option is to try Universal Studios but I am not keen since many of the rides are 3D or 4D rides (a big no-no for me since I am prone to motion sickness) and quite a number would have height restrictions.

Osaka would also be a good time for us to split up for an afternoon if we really want to. After more than a week of being in each other’s hair, it would be good to go off on separate adventures for a while to recoup some lost space!

Looking forward to the neon zones, food and street life of Dotonbori and after that, a good night’s rest at Ichiei!