>We arrived at Narita at 7.04am, Tokyo time. Everyone was quite zombie-like due to lack of sleep, but generally cheerful and excited – hey, we’re in Tokyo, people!

First stop, JR counter in the basement of Terminal 2. We had to exchange our JR pass vouchers for the actual passes. I also made seat reservations. Note that while it may be easy and convenient to hop on and off trains because of the JR pass, certain segments might be worth making seat reservations since they are likely to be full and you don’t want to have to stand or have to sit in a smoking carriage.

Even then, when I tried to make the reservations for the last leg of our journey from Okayama to Tokyo on the shinkansen, I was told it was all fully booked and I had to content myself with reservations in the smoking car.

While I was busy with the paperwork, the kids (see left picture) sat on the ground, drank the first of many drinks from the ubiquitous vending machines, argued, played hand games, chased each other around the place and generally left me feeling nervy. I didn’t think Japanese kids behaved like this and did NOT want disapproving looks shot at me. But despite me reading them the usual sermon, the peace never lasted for long.
It was a bright and sunny autumn day we arrived. The Narita Express or NEX cut through green rice fields set beneath a deeply azure sky. Here and there, you could see the occasional Jizo shrine along the country roads. It reminded me that I was well and truly back in Japan. The hillsides were still largely green although there were already some trees which had turned colour.

But we were so zonked out from the flight we just could not stay awake and pretty soon, we were all snoozing to the gentle rocking of the train.
We arrived at Tokyo station, found coin lockers easily, stuffed our bags in and took a train on the Yamanote line to Ueno. But before that we grabbed a quick but expensive lunch of pasta and pizza in one of the restaurants in Tokyo station.
It felt good to be back. Things looked and felt the same and yet different. While I enjoyed the familiarity – being able to navigate my way around a bit more easily this time, I still thrilled to the fact that I was finally in Japan again. The little details still bring a big grin to my face. Check out these Crocs for instance. We were in Ameyoko market and a shop was selling these original Crocs lined with fleece and they looked so comfy I wish I wear one right now.

Ameyoko was packed with people. ‘Ame’ being a close abbreviation of America and ‘yoko’ being alley, Ameyoko was born out of a thriving black market during the American occupation of Tokyo in the post-war years. Today, it is still a market – with all manner of fish, dried foods, clothes and food stalls. Its very noisy, colourful and teeming with people.
We saw a stall selling sashimi and sushi don on the cheap – prices hovered around 500 to 700yen a bowl – and salivated at the variety – they had a good range of tekkadon, chirashi-don, negitoro don and so on. Really regretted the earlier pizza and pasta. People were sitting on stools, gobbling down the fish and rice, coming and going like a fast food joint.
Following Ameyoko, we took a subway to Asakusa and headed for the Sumida-gawa and Sensoji. We didn’t go far. The cherry trees there had already lost most of their leaves. Can imagine the spectacular sight in autumn though. Lots of people lining up to board the river cruises and the line stretched for more than 100m! Philippe Starck’s controversial golden flame, or beer froth or er, turd (depending on your interpretation!) gleamed across the river. Caught sight of the futuristic looking suijo bus on the river. Owain wished he could get a ride.

Sensoji was as crowded as ever, and as smoky too. As per tradition, we stood at the giant joss urn and wafted the incense smoke over for good luck and good health. I took an omikuji (fortune telling slip) and mine said, among other things: “…the patient will recover…” Which I hope would happen for dad. Happy to say that, writing this 15 days later after the trip and with dad still in the High Dependency ward when I left, it was a good portent because dad looks so much better today when I saw him. We have had nothing but good news since and I think he’s pretty much out of the woods.

This is smoky and crowded Sensoji. 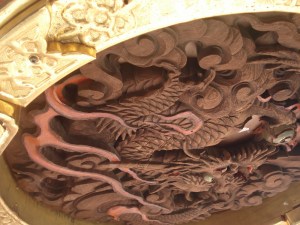 I really liked this detail – this is the underside of the huge lantern hanging in the Kaminarimon gate. While everyone usually takes a shot of the huge lantern and then passes by beneath it through the gate, no one really looks up to see the beautiful wooden details of the lantern base.

We all gave the Nade Botokesan Buddha a nice massage as we passed. He is renowned as a doctor and is said to be the patron saint of healing and good health. You can see where the bronze statue is rubbed to a nice shine by the many thousands who must have rubbed him for some luck! This journey seems to have a great deal of significance when it comes to health, for obvious reasons!

Note that not all of Sensoji and its environs are busy and crowded. We wandered off into some of the backlanes and found serene little green patches and tiny peaceful shrines which seem forlorn and forgotten by most in favour of the bigger stars at Sensoji.
But this is precisely what I like about Japan. You get the big blockbuster sights but tiny quiet surprises are still around the corner. If you wander off the mainstream, you never know what you will find.

By this time in the

early afternoon, we were really just sleep-walking. Despite wanting to carry on, and our initial plan was to move on to Shibuya for the nightscape, we threw in the towel and headed for our hotel in Maihaima. Poor Owain was so tired that he literally slept standing up in the train to Kasai Rinkai Koen! And by the way, the weather that day? Hot! We were ready for temps of 15deg or so, but got 18deg and that was great for strolling around in tees but in our jackets etc… we were really perspiring! 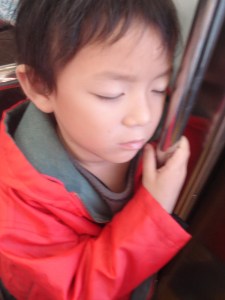