>Rise and shine cos today is Disney day! As usual, no problem getting the kids up and going that morning because they all know we’re headed for Disneyland. Unlike the first time, we took our time getting ready and getting there. Maybe the excitement factor has waned a bit since this is the second time.

After a good brekkie at Family Fifty’s (I still love their simple salads with soya sauce dressing and big hard-boiled eggs with orange yolks!), we took the bus to the station and got on the next train to Maihama. We were late getting there and the hordes had already stormed the gates. We bought a 2-day passport for 10000yen per adult with the second day allocated to Disneysea. Once through the gates, as usual, there were lines galore for picture-taking with Mickey and his pals.
Now, the wise – no, sane – strategy would be to AVOID these lines and just stand about a metre or so away and just snap a picture or go for the less popular characters since Mickey and Minnie et al have lines that stretch past 50m! But because yours truly was so caught up with Disney fever, I insisted that we should have have a picture properly posed with at least ONE character. So I made a beeline for the three pigs who did not seem to have as many people crowding around them.
Well, after my porky experience, let the record show that I’ve now officially put the three pigs on my personal hate list. Pork will be big on my menu from now!

There I was, tugging Trin alone, swinging her here and there to try to get to ONE pig. They don’t have lines but they do have people milling about them. If there was a line, it must have been an invisible one because I patiently waited, and waited… and waited and those bloody pigs (whom I mentally made into 24 types of sausages already) did not give us the time of day. Whenever I went up to one, they would turn away and face someone else, or wave at me but sign another girl’s autograph books (who knew pigs could sign autographs?! Can their little trotters actually hold pens?) and so on it went. The last straw came when a protective pig minder came and gestured for me to give way to a disabled kid in a wheelchair. I have as much compassion as the next guy when it comes to people with disabilities but dammit I have been waiting for that stupid pig to take a picture and by God, I WILL take a dang picture even if it kills me!

Long and short of it was, the pigs won and I gave up. The last picture I have of that darn pig is this: 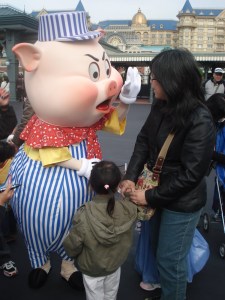 Kena scolded by a pig!
We finally made it into the park but all the fast passes for the new Monsters Inc attraction were gone and the line wound on and on for several hundred metres. Waiting time? 240min. Forget it. We had other stuff to do. 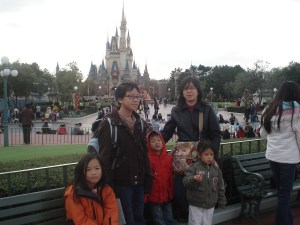 Finally in the park!

We were a little overwhelmed and this time, less ready with a clear strategy. The idea was to spend a bit more time in Tomorrowland since we usually miss this area. So we ended up taking a fast pass for the Buzz Lightyear Astro-Blaster attraction and went off to do something else while waiting for our FP time slot. This was everyone’s favourite because it was interactive – you could shoot Zorgs and tote up your score at the end. Heh, for the record, Isaac later scored the highest while daddy, to his dismay, ended up near the bottom of the table. And as for me, hah! Zorgs fear me!!
We picked the attraction with the shortest queue and ended up with the Microadventure – a 3D ride with glasses. Here’s how cool we all looked in our glasses. Or at least, how cute Owain looks: 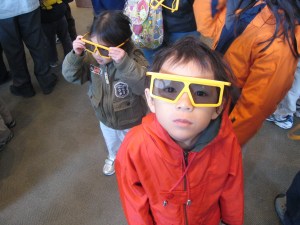 Microadventure was okay, but not great. Was never a fan of the 3D or 4D rides. We spent the rest of the morning at Toontown, in the Go’coaster and Roger Rabbit’s Car Toon Spin. Happy to say that roller-coaster phobic me survived the ride. Can see the kids eyes’ rolling now at their wimpy mom.

Lunch was Mickey Mouse pizza. We took great delight in chomping his famous ears off. Really loved the packaging that Disney has. Not exactly environment-friendly in that they do not use recyclable plastic trays to transport your stuff to your table, they use nicely printed paper cup and food holders instead. But then again, the concept is nice and at the end of the meal, the left-overs and waste are carefully sorted out into bins for food waste, paper waste, ice etc. You’d never see this at McDonalds here. 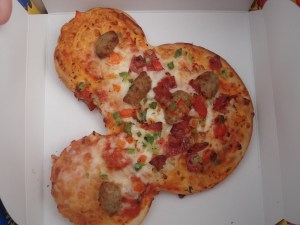 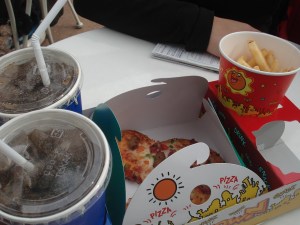 For some reason, the park was really crowded that day. The last time we were here, it was not as bad. The queue for Monsters Inc never got better, even as the day waned. By the time we left – around 8pm, the queue was still stretching for at least 2hours!! Regretfully, we just had to leave it for another day.
We watched the parades (from afar. We have many quasi-parade shots with lots of other people’s heads in the frame which will never be published in this blog) and went on our favourites – Pirates of the Caribbean, Haunted Mansion and checked out some new ones – Star Tours, Grand Race Circuitway, Peter Pan, Pooh’s Hunny Hunt, the Western River Railroad and a couple more – generally those we never covered the first time we were here two years ago. We also made time to eat – the smoked turkey leg was as ginormous and just as delicious as I remembered.
Some tips to enjoy Disney:
1) Make use of parades. The Japanese love parades and would stake out their spots well in advance of the actual parade. So when people are watching the parades, go for the rides. I tugged Trin over to the lovely Pooh’s Hunny Hunt and it was empty – queue time only 10min. The minute the parade ended, we tried to go for the same ride with the rest of the kids (who were busy watching the parade) and wait time had swelled to 70min!
2) Use the FastPass wisely. Once you take the FastPass, you can only get your next FP after a certain time has lapsed. We got ours for Buzz Lightyear ride but then could not get a FP until hours later when we finally got another one for Haunted Mansion.
3) When the night falls, people start to leave and the place is far less crowded. So by 4.30pm when it got dark, biological clocks start chiming for dinner and exits so the place thinned out. We could get a ride for the Grand Circuit Raceway for a wait time of only 25min. We also got a ride on the carousel for a 10-min wait time.
4) Queue, queue and queue. Even for photo ops and toilet stalls. The Japanese are too polite to tell you off if you potong jalan, but icy looks can prevail. I did the Japanese thing and queued even for a photo op with the Monsters Inc car for Trin! And even then, no matter how long you take, no one actually chases you to hurry up with it. Maybe because of all the queueing, people feel entitled to take their time.

5) Strollers are very useful for sleepy and cranky tots and tired moms. While I do not relish dragging a stroller through Japan, I think renting one in Disney has a great deal of merit.

6) Don’t dismiss the ‘easy’ rides. In all our visits to all the Disney parks, KH and I have never taken the Jungle Railroad, believing it to be just a joyride round the park. But this time, because the queue was non-existent, we checked it out and had a good time. Disney’s impeccable theming again, works to create a realistic yet fun ride into the wild west.
Because we’d been to Disney already, and pretty much seen/done what we wanted, we left the park early – around 8pm. Trin was sleepy, cranky and a deadweight – in no particular order. So we left and had dinner at the same ramen joint we dined at the night before. Just across the road from the hotel.
Fukurou was a simple set-up but churned out great food. Kids loved the ramen and I loved mentaiko rice! The ramen also came with a bowl of rice which I had no difficulty polishing off accompanied by the yummy condiments on the table – preserved veg (like kiam chye buay) and a kimchi-like chilli dish of koo chye. Very nice. 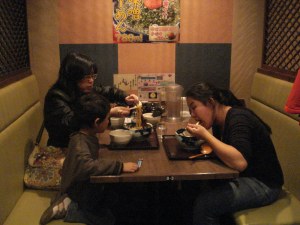 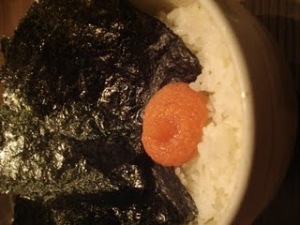 Trin slept through the meal, too tired to rouse and eat. The kids gobbled everything in sight and had seconds. I wrestled with the vending machine but triumphed thanks to the very kind waiter/chef whom we discovered, came from Malaysia – Ipoh to be precise! The young man had come to Japan to study but because the economy back home was not that promising, he had stayed on. Its been 10 years already and he’s gone native, marrying a Japanese woman and having a 3-year-old daughter with her.
I found it a bit disconcerting that the guy would get a degree but end up serving tables in an obscure ramen joint in a Tokyo suburb. But I think it can’t be easy for him to get a salary-man type of job in Japan since he is a foreigner and the Japanese are notorious for closing ranks against foreigners. I don’t think though, that he would ever go back to Malaysia (although I think his prospects can’t be as bad as he thinks) now that he has a family here. It would take too much effort for his wife and child to settle down there in an unfamiliar climate and amid unfamiliar customs.
It was a nice conversation we had and although we’d been in Tokyo only less than a week, it sure felt good to hear a familiar accent! He could not speak English that well but his Mandarin was delightfully Malaysian! I think I felt a bit sad at leaving the restaurant and breaking the nice connection we had made. A bit like leaving home behind again. 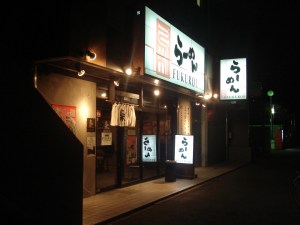