What a great day this was! Filled with 5-star sights, blessed with blue skies and great weather. One a graceful castle with clean stone walls soaring up into the air, steeped in history and the other, one of Japan’s, indeed the world’s, saddest sites.

Bright and early, we backtracked to Shin Osaka to hop on a shinkansen for the 25min ride to Himeji.

Our first time checking out the unreserved cars, we got in line but did not realise that we had gotten

in line for the Smoking carriage! Arghh!!

The ride was only 25-minutes but it felt like hours and probably took 3 years off my life. We literally sat in a blue haze, coughing, sputtering and choking as the air turned greyish-blue with passengers lighting up all around!

Lesson learned the hard way – look for RIGHT train car before we start queuing! Usually there would be at least one car for smoking and the rest are non-smoking. Just our stupid luck we got on the wrong one.
From Himeji JR, it was easy to hop on practically any bus to go up the 1-km long avenue to Himeji castle. There was actually a designated tourist bus for this purpose but we got on a city bus and it was not a problem. 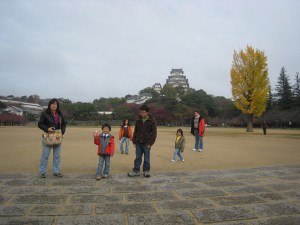 Himeji is worth seeing because it is the only intact castle left in Japan that still stands despite the years of war, WW2 bombing, industrialisation and so on. Its not called the white crane castle for nothing, with its white walls and stone fan walls curving gracefully upwards, it is a very elegant structure. Crossing the first moat, you would come to a wide expanse of land (see picture on the left).
This used to be the site of the samurai enclave, now long gone. Imagine if you will, the town of Himeji encircled by concentric canals and moats. The outermost ring of houses and buildings taken by the farmers, then merchants and traders and crossing the main moat, the samurai and finally, right at the heart, Himeji itself. Designed to repel invaders by a series of corridors and passages and moats, Himeji never saw any warfare. 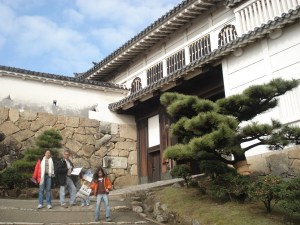 The day looked a bit gloomy at first but soon brightened up. There were no English guides available that day but it was alright – the brochure and the signages were excellent. No problem finding our way around. Picture on the left is the water gate. The size of the gate was deliberately kept a tad smaller than the norm to make it difficult for large armies to squeeze through, slowing their advance to the main donjon.
We liked the West Bailey building which included the famous long corrider and cosmetic tower where Princess Sen lived for many happy years. We also saw, to our amazement, winter sakura! Himeji is well-known for its cherry blossoms in springtime when thousands of trees burst into pale pink and white bloom. So I guess for us, having missed that gorgeous spectacle, the next best thing was to chance upon a small grove of winter sakura. See below – aren’t they pretty?

After passing through many buildings, passageways and gates, we finally come to the main keep itself. The view from the lawn in front of the castle was fantastic. Climbing up and up into the higher floors of the main castle was challenging because it got steeper and steeper. Right at the end you’re just hauling yourself up almost vertically. At the very top is a shrine and marvellous views of the surrounding city and suburbs.

Highlights of the rest of Himeji include the harakiri-maru, a small building with a well in the courtyard. This was meant, rather gruesomely, for ritual suicides. If the lord had ordered someone to commit seppuku or ritual suicide, he would be sent to this courtyard for his fate. The well was there to wash the corpse and the severed head. However, since Himeji never saw any battle action, the harakiri maru also never saw any suicides taking place. The kids were also fascinated by Okiku’s well. In one corner of the grounds, there is a well which was supposedly haunted by the ghost of a maid who died after being thrown into the well after being severely tortured as punishment for a trumped up charge of breaking one of the daimyo’s dishes.

From Himeji, it was another easy shinkansen ride to Hiroshima. It was late in the afternoon by the time we got to Hiroshima. We left our bags in the hotel and took a tram to Hiroshima’s key sight – the Peace Park.

The twisted metal and skeletal dome of the Hiroshima Prefectural Industrial Promotion Hall stood across the road from the tram stop. It was left standing as a reminder – for peace. It was hard to believe that more than 50 years ago, this area was devastated by a single bomb. The scene before us looked so idyllic in the evening – people strolling by the river banks, the autumn hues in full glory, couples sitting by the riverbank. Hard to believe it was all gone, flattened by the force of the bomb so many years ago. 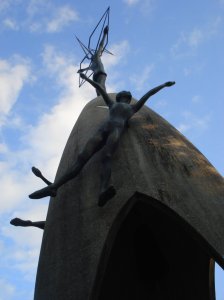 One of the most moving sights was the Children’s Peace Monument, and the display of many millions of colourful paper cranes folded by school children all over Japan. The story of Sadako Sasaki is well-known and I won’t repeat it here. I had heard that every year, hundreds of new colourful cranes are sent to the park. I wonder if the children are told the full picture of the war. They should. I hope they are making the cranes not as a perfunctory exercise for a long-dead girl, but in understanding that war is a terrible thing and the worst casualties are the innocent children.

In Hiroshima, many of the dead and injured were children who had left school to work in the factories to contribute to the war effort. Most of those who died that day suffered severe burns as they stared into the sky, fascinated by the light of the bomb. Sadako was only two then. But the shadows of war are long and she died anyway, years later, barely making it out of childhood.

Okay, this is not a political blog and I am not a historian or political commentator. I come from a place which also suffered at the hands of the Japanese many years ago. I still recall stories from my grandmother about the atrocities that were committed in Singapore and Malaya then, and of course, who can forget the horror of what happened in Nanking. But being here in Hiroshima, wandering through the sad exhibits of the excellent Peace Memorial Museum, helps me see a different perspective and understand a little more. It’s always easy to villify a race or a people for the sins of the fathers, but harder to understand and accept that the people on the ground were not all like that, that they had families as well, and these families also suffered from the ravages of war, that life cannot be simply squared off about who owes the greater debt.

War is war. People die. It is horrific. It is never fair no matter whose side you’re on. What is scarier for me is to know that today, bombs more than 100 times more powerful than the atomic bomb that devastated Hiroshima exists. And we are all vulnerable at the mercy of those who can press the red button. And these days, they need not be war-mongering politicians but terrorists.

We all think that our generation is past the horrors of the previous generations, that we are more sanguine and better able to forget. Or maybe not even care anymore. But interestingly enough, everytime (and I mean everytime) I spoke to someone to share what I saw in Hiroshima, there would always be this dismissive tone, as if to say: “well they started it, they deserved it.” Not in so many words but it is what I sense in the tone of their voices, the raising of eyebrows and a shrug or two. But the truth is, when you see the horrors of Hiroshima, the blackened ruins of Oradour Sur Glane in France, the thin slick of oil floating in the waters of Pearl Harbour, as I have, then you know that nothing squares up in life and nobody really “deserves it.”

The walk through the park was a nice one. The place was serene and the autumn leaves were beautiful. While everywhere there were memorials, monuments, even a large burial mound that contained the ashes of 70,000 who died that first day, the mood was not depressing or mournful. Rather, it was hopeful. These things were placed there for us to remember and reflect.

The highlight of the park for me was the excellent museum with very good explanatory notes for every exhibit. Many of the exhibits were heartrending – the bloodied and torn clothes of a child, the mangled remains of tricycle, a shadow burned into the steps of a bank, the small pathetic possessions of the dead – smashed glasses, melted coins, toys, exercise books and school bags that were singed, burned and so on. For those who did not die instantaneously in the blast, some children actually managed to walk home, bodies blistered and skin peeling off, only to die in agony hours later. And then of course, there were those who died months, years later, like Sadako.

It was horrific, gruesome and probably over-excessive in parts but also very, very sad. For me as a mother to read about the children who died, it was very painful. Even the older kids were moved. Gillian and Cait wrote their condolences and comments in a visitor book. Isaac was mostly silent as he moved around to read the different accounts. Trin of course was oblivious and Owain was more goggly-eyed about “Little Boy” (the name of the bomb) than the fallout and the tragedy that ensued.

But amidst the sombre faces, we did have a really good laugh when we saw that the first test site of the atomic bomb was a place called Trinity! And the highly radioactive greenish-blue bits of glassy stones left after the explosion is called Trinitite! Now that is so fitting! God sure has a sense of humour in letting me name my firecracker of a kid Trinity.

Hiroshima is a small town than Osaka and Tokyo and its central shopping area showed it. The place seemed to be quieter and more shops closed early. KH and I closed the night doing laundry! Which was a big mistake. We had to do multiple loads with the dryer and I had to work it with the clothes press since it turned out that the hotel’s dryer was a real lemon! It dried VERY little and very slowly. But when you have a full load, that could really take a while. We finally collapsed at 2am with damp socks, underwear, tees and jeans strewn around us and draped over furniture.

This entry was posted in Japan, Travel with kids and tagged Himeji, Hiroshima, museum. Bookmark the permalink.

1 Response to >Day 12 Himeji and Hiroshima