Takayama – the ‘B’ side you never saw 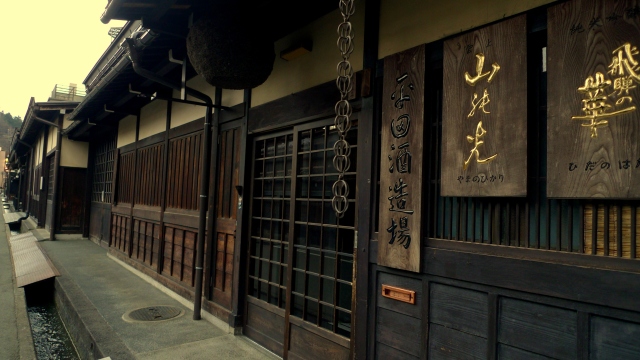 We saw a side of Takayama rarely seen. Hence the title of this post: the B side, the flip side.

We’ve been told that dusk is the best time to visit Sanmachi-dori, when the streets empty of tourists and the day-trippers leave in their tour buses. That, said all the guidebooks, was when you get a sense of old Takayama.

Well, we didn’t have to wait for dusk.

As it turned out, the streets of Takayama were empty all day. We were in Takayama for two days and both days we saw barely more than a handful of tourists. It was a little disconcerting to say the least. The place felt like an abandoned ghost town. While it was nice to have the place to ourselves, the quiet – no, silence – was downright eerie!  Perversely, KH and I found ourselves wishing for more crowd! 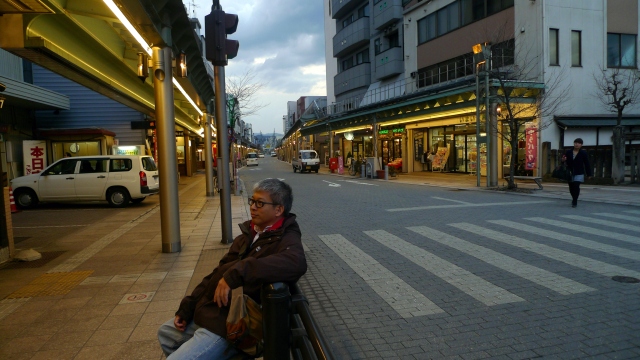 In most instances, we were the only ones on the street. In the pictures you see, you will notice in the background, there is barely anyone around. Above is one of the main shopping arcades in Takayama, but the restaurants are empty and many shops are closed.

But I am  getting ahead of myself.

Getting to Takayama was easy. A subway trip from Namba to Shin-Osaka, a shinkansen from Shin-Osaka to Nagoya where we broke the journey to meet a friend, and then the final scenic stretch from Nagoya to Takayama, deep in the mountains.

It only dawned on us when we arrived at the tiny single-storey station that we were really among the precious few visitors arriving at Takayama that day.

Not far from the train station, about just a five-minute walk away, the Spa Alpina hotel in central Takayama was welcoming and cosy. Our tiny room had all the amenities and overlooked the snow-capped mountains in the distance and the gold-horned roofs of the Mahikari cult.

It was turning grey and chilly by the time we left the hotel for a walk around town. Barely three minutes away on foot is the gorgeously preserved Takayama jinya – the former seat of government or civil service in Takayama where all the town’s administrative and judicial matters were carried out. 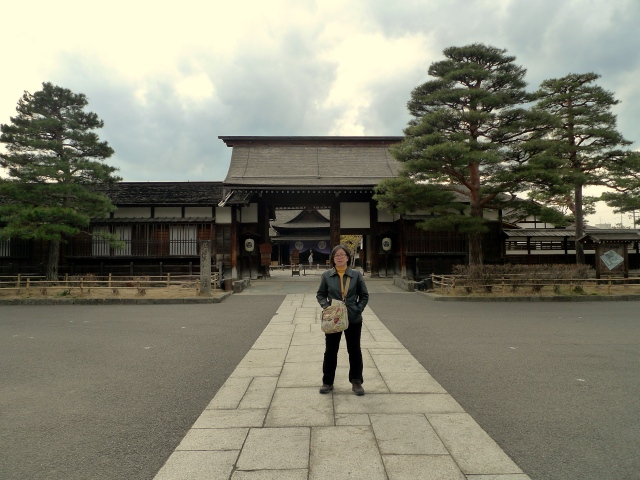 We were the only ones at the ticket office and the place looked empty. We booked an English tour – free of charge – for the next day at 9.30am. The lady in the ticket office asked shyly in English: Where were we from and why did we come to Takayama? Were we not afraid?

It would be the refrain we would hear often in the days ahead. Again, we trotted out the same answer with a shrug: Takayama is safe. Japan is safe. We were not worried at all. What was there to fear exactly?

Hers, like many others who asked, was a smile lit with pride and gratitude: Thank you for coming to Japan. Then she revealed that there has been a drastic drop in the number of visitors. Today, like most days, hardly anyone has visited Takayama-jinya. Less than 30 visitors a day.

For a tourist magnet like Takayama, we were shocked at the numbers. We had been told that there had been cancellations and obviously in the light of what has happened in the north, we knew there would be a fallout in tourism numbers. But we had not expected the numbers to be so bad, and to see and hear Kana-san (for that was her name) say so was to see the fallout humanised – here was another casualty, albeit far from the devastation up north. The tsunami had rolled over Japan, further and deeper than just the coast, in more ways than one.

Takayama is made for strolling. Streets on a grid made places of interest easy to find. Delightful details await if you keep an eye out for them. The many celebrated festival floats are kept in various parts of town so walking through the streets you might stumble on several tall narrow doors, usually white-washed in black trim. Behind these are the floats which would be paraded around town during the spring and autumn festivals the town is  renowned for. What I liked are the nice touches – sculptures on bridges and street corners like this: 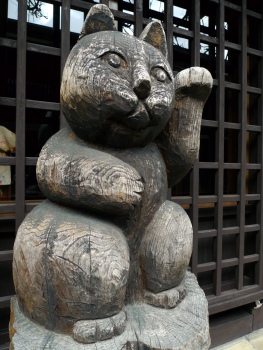 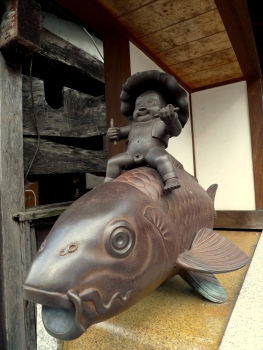 A walk up to the outskirts of Shiroyama Park, an exclusive residential area bordering the temple-laced Teramachi district gave us a grand overview of Takayama rooftops: 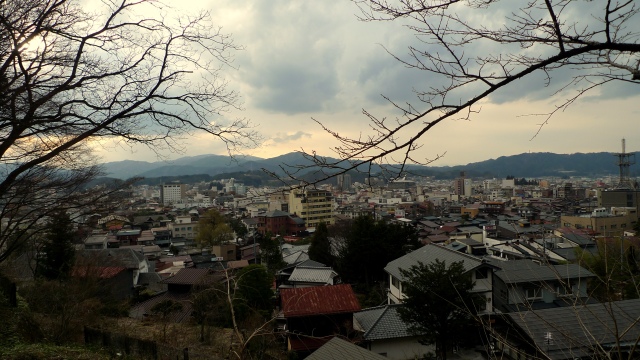 Ringed by mountains, beautifully preserved streets and machiya, temples and shrines on the outskirts, Takayama is known as ‘little Kyoto’ for good reason. I passed an old traditional single-storey house set in a pretty garden overlooking Takayama, a hanare sat in a corner of the garden and wished it were mine.

It was cold and the trees’ bare branches reminded me that here in the depths of the countryside, it was not quite spring. Patches of snow showed that winter was still a bit reluctant to leave. 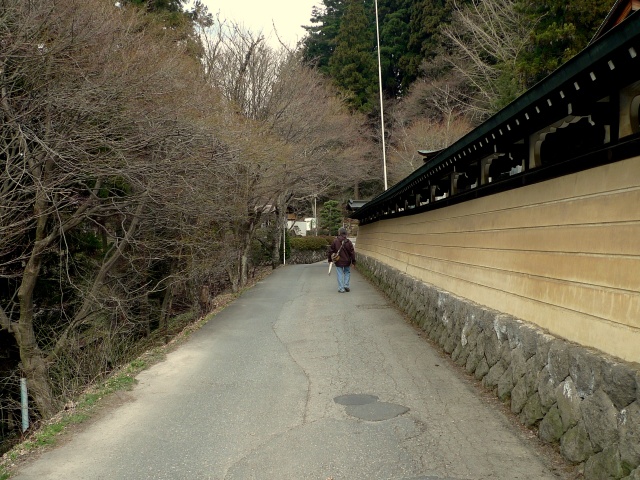 KH and I enjoyed our stroll around the outskirts, through a largely residential area, checking out houses, schools and even the town’s library! 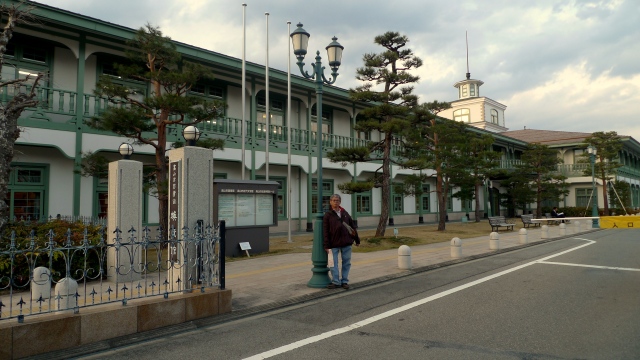 A stately graceful old building, how I wish our public libraries looked as pretty as this one! We wandered in to see familiar shelves well stocked with books, a check-out station and to realise that all libraries smell the same!

A bit of a slice of life walk through the town, which felt more like a cosy village than a sizeable town, this side of Takayama is seldom seen by tourists who are more likely to cluster around the old district.

Seen a Japanese school? Here’s one (I can’t be sure but I think it’s an elementary school combined with a kindergarten): 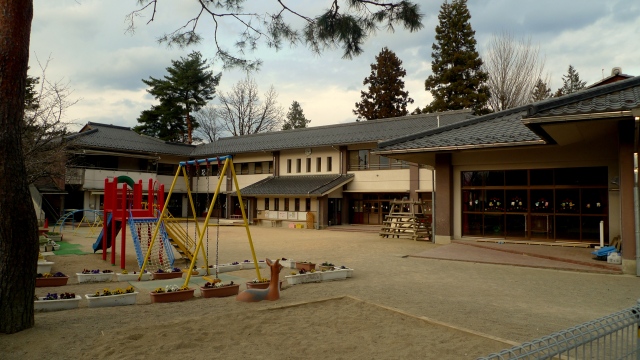 Compared to the schools in Singapore, these are distinctly smaller, more modestly-sized buildings but with a more personal scale that perhaps would fit a school much better. The playground is not impressive and more familiar to me as an old-school style playground than the state-of-the-art entities in Singapore, but I like this simplicity.

From the Teramachi district, we wandered across a bridge and headed back towards town for dinner.

We had our pick of empty restaurants but followed the Lonely Planet’s recommendations for Suzuya. 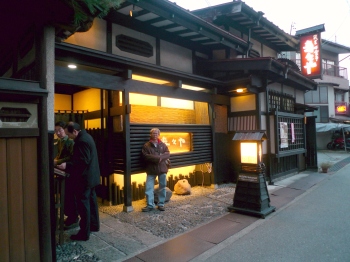 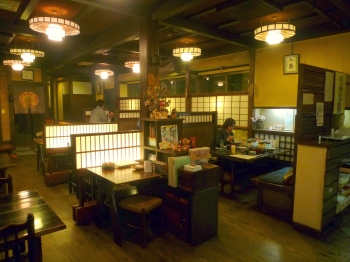 Known for its Hida beef, Suzuya was easy to find. Like all the other restaurants in Takayama, it was virtually empty save for us, another lady and the two gentlemen (picture on the left). The owners of Suzuya again struck up a conversation with us and told us that usually at this time of the year, the restaurant would be filled with customers.

Night after night for the past few weeks since the triple whammy of earthquake, tsunami and radiation fears, the restaurant has been like this – near empty. They were obviously hurting from the lack of business.

This was a pity because the food was great! We had nicely marbled Hida beef, tender and sweet, over a fragrant hoba (magnolia) leaf on an open clay grill with miso paste – a nice blend of savoury and sweet with a tinge of a mildly smoky flavour. 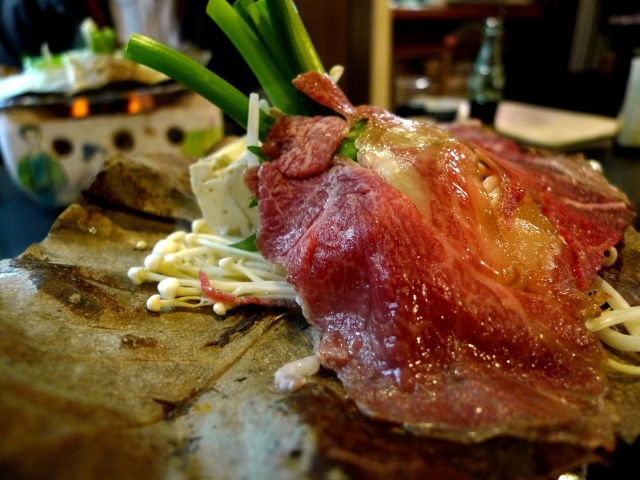 It really is as good as it looks. 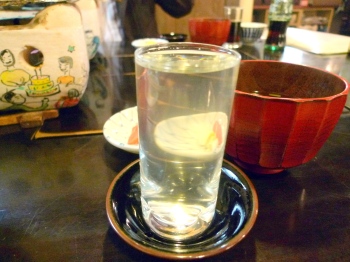 Halfway through dinner, the owners of Suzuya sent over two tall  glasses of the house sake. Compliments of the gentleman in the back booth.

Mr Yoshida (who did not want to be photographed) thanked us for coming to Japan even as so many avoided it and wished us well for the rest of our journey. He had overheard us speaking in Mandarin earlier and in fact he himself spoke impeccable Mandarin and English! Turned out his wife was Taiwanese because he “could not get anyone else in Japan to marry me!”

Given a choice between alcohol and Coke, both KH and I usually just pick Coke. But that night, we both finished our sake to the last drop. Not only because it would be rude to not finish, but also as a heartfelt kampei to Japan.

This entry was posted in Japan and tagged Takayama. Bookmark the permalink.