Takayama – a day out in the old town 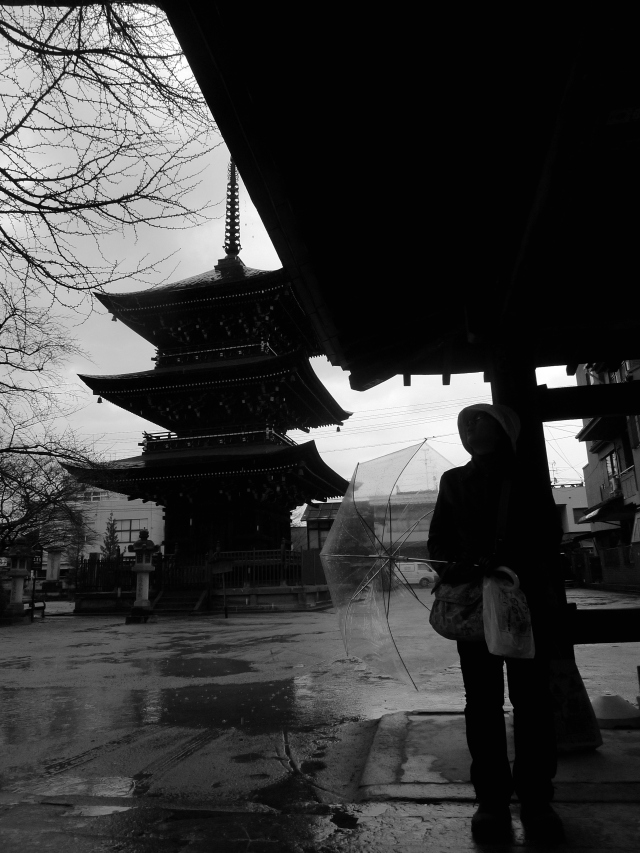 What I remember best about Takayama are the warmth of the people we met, the stately houses we visited all dark old beams and worn steps, the weave of the tatami, the flavour of salty tea, red and faded sarubobo in the rain.

It was all grey skies and rain that day we spent in Takayama. But rain-drenched though it was, it was never depressing or overtly melancholy.

We started the day with our appointment with Kana-san at the Takayama Jinya at 9.30am. We were hoping to browse through the farmers’ market but there were no stalls out there save for one. It was either too early or perhaps the stallholders just gave up seeing that there were fewer and fewer visitors in those weeks.

At Takayama jinya, being the only ones there, we were privileged to be given a personal tour by Kana-san. The complex of government buildings date back to the time of the Kanamori clan which once ruled as overlord in the Takayama environs until the Tokugawa shogunate started taking a more active interest in the running and profits coming out of the timber-rich area. When the shogunate took over, Takayama jinya then became the seat of government for almost 300 years, from 1692 to 1969.

Back then, the place functioned as court dispensing justice and mediating in disputes, administrative office, official governor residence and home to a huge granary – Japan’s oldest. 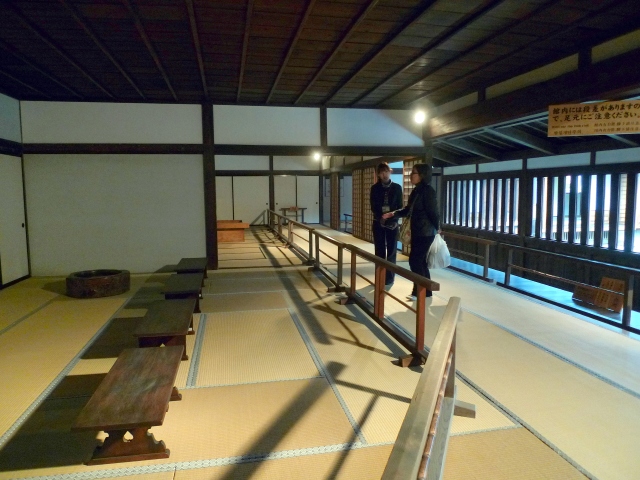 administrative offices in Takayama jinya. These were for Edo officials with lower ranking local officials taking the room beyond. Notice the tatami trim.

It was fascinating to see the hierachy of authority even in terms of the seating area of the officials. Higher ranking officials for instance sat in areas distinguished by the type of tatami matting and the trims. The higher-ranking you were, the better the furniture, with the higher ranking official at one end of the room right down to the lowest on the totem pole at the other.

There was even a pantry where maids prepared tea for the officials, an open office space for scribes (the old fashioned alternative to photocopiers!) – so really not unlike our current corporate offices – sans the maids and scribes of course. Entrances were carefully laid out according to one’s station in life – the ordinary people, officials, monks and servants. Even the wife of the highest ranking official had slightly different entry protocol into the residence compared to her husband! Pfft!

What also fascinated me were the nifty architectural details – windows of wooden slats that overlap that could be closed and opened for privacy, mamuki usagi or nail head concealers made of metal and designed as rabbits with long loping ears (apparently the long ears denoted a willingness to listen to the people!), roof shingles of Japanese cypress that overlap and connect seamlessly without nails. These were still in use for the granary, the oldest in Japan and the traditional methods used for roofing were used as recently as the last re-roofing a few years ago. 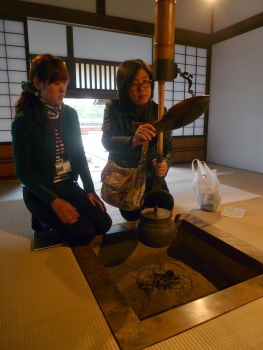 I also liked the irori, a sunken hearth in the floor and often seen in homes and public buildings. Very often there is a bamboo hook that hangs above the hearth with an adjustable hook for the pot called a jizaikagi – most commonly shaped like a fish. Why a fish? Associated with water, it was hoped that they would prevent accidents with fire.

The jizaikagi was one of the things I fell in love with and wanted to cart home but the fact that we were backpacking and there were miles left to go stopped me from raiding the antique shops for one.

Takayama’s well-preserved old streets are now lined with sake breweries (free samples! hic!) souvenir shops, art  galleries, antique shops, cafes and folk museums – all of which made a day of window shopping and browsing – while dodging the rain of course. 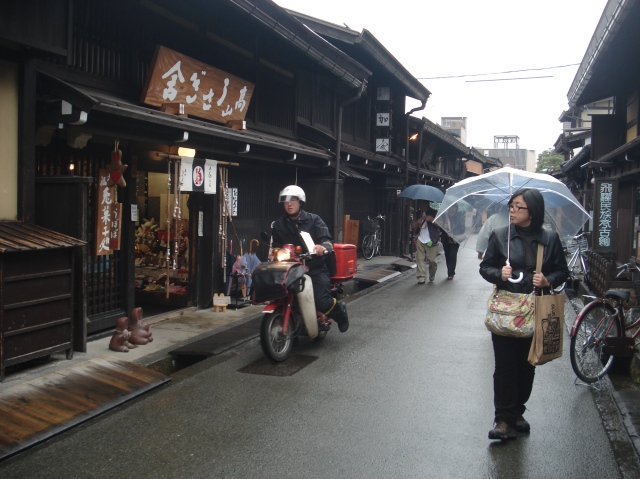 Along the old streets of Takayama sits a folk museum which was once a former doctor’s house. What made the house stand apart from the rest was the fact that said doctor was a ninja too! His house had some hidden ceilings and boobytraps. Nothing as fancy as the ninja temple in Kanazawa but interesting enough. Though why a doctor had to boobytrap his house made for some interesting theories.

It was there that we met Mr Hiroaki Mohri, a math professor from Waseda University who was visiting Takayama with his mother and sister. Realising that we could not understand Japanese and there were no brochures at hand, Mr Hiroaki kindly offered to translate what the custodian of the musuem said. That really made all the difference to us! After the visit, we adjourned to the teahouse next door where Mr Hiroaki treated us to matcha and sweets as we chatted about Japan and Singapore. 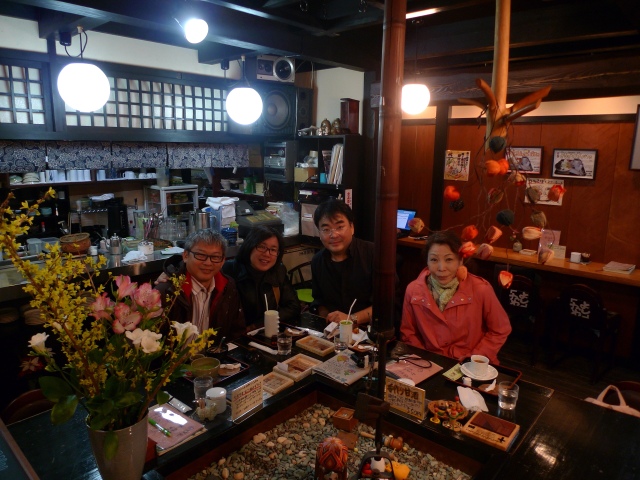 tea with new friends on a rainy morning in Takayama.

I love wandering around old streets and old houses and Takayama is a town made for this. The screen of raindrops, a soothing white noise of pitter-patter on old roofs in the quiet from the lack of tour groups and visitors, felt like a pause in time as KH and I wandered through and contemplated these old houses.

These houses have a stately dignified elegance about them.  Old black beams the criss-cross above, mezzanine levels that lead from room to room, a mossy garden courtyard, latticed fronts, discreet entrances with doors that open lifting upwards, rooms of tatami and shoji screens that could be enlarged or shrunk according to different needs. These hallmarks of traditional Japanese houses were apparent in well-preserved merchant houses like the Kusakabe house and the Yoshijima house. 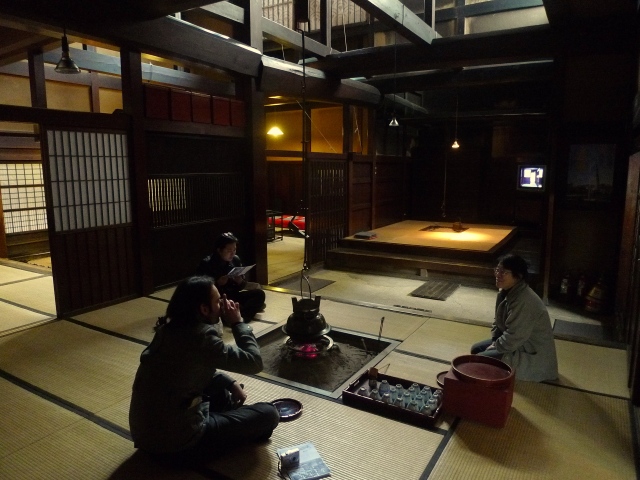 tea in the Yoshijima house

Admission to the Yoshijima house, the former home of wealthy sake brewers, also included Japanese tea at the irori. We were the only ones there apart from the other lone visitor – an Italian man living in Tokyo who spoke fluent Japanese thanks to his Japanese girlfriend – okay we confess we got all that from eavesdropping and piecing together what tiny bits of Japanese language we had. The three of us sat there, exchanging awkward smiles and sipping tea that was surprisingly savoury and salty in flavour. I think we were curious about each other, but just reluctant to make contact, not wanting to seem intrusive. 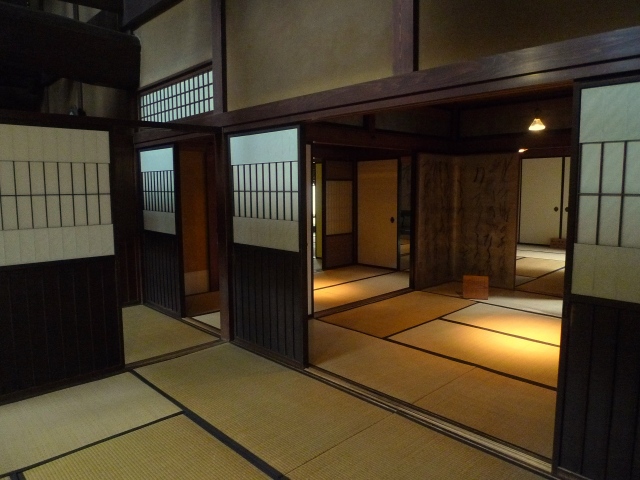 I think in all my visits to Japan, this was the first time that KH and I had the opportunity to really see and appreciate the structure and style of old Japanese houses. I am not an expert in architecture, but I am in love with these houses, so spare in design yet so elegant. Writing now, more than a month after my visit, I sketch plan after plan of similar houses in love-struck daydreams of one day building my own someday somewhere not in urban jungle Singapore… 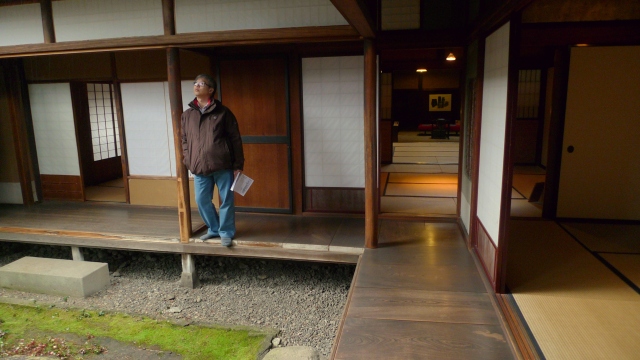 Hungry after all the walking, we indulged in two sticks of Hida beef, kebab-style at the highly recommended Yamatake Shoten (the restaurant was closed but a small kitchen window outlet was open): 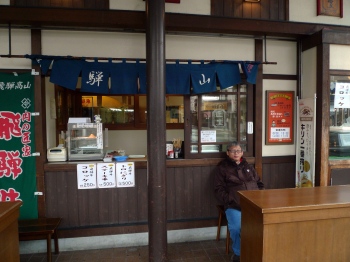 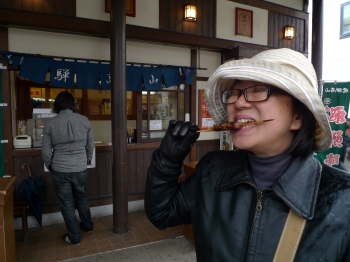 Walking towards Hida Kokubunji, we came across an antique shop where we bought a wooden plaque with the word

carved out of iron. It means stillness, quiet and calm – which I thought would be apt for our boisterous household of seven. 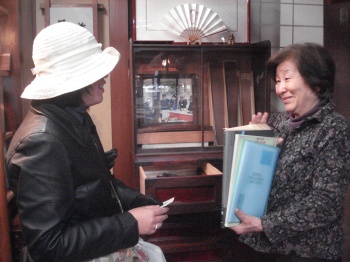 The lady owner of the shop was very patient with us. Sign language and smiles helped in transcending the language barriers as she took pains to share her heritage in woodwork with us.

Takayama has long been known for the quality of its woodwork. This lady came from a long line of distinguished carpenters and wood craftsmen.  Her father was honoured to have his work  selected for use by the emperor of Japan. We admired the fine workmanship of several pieces but she indicated with a smile that these were not for sale. They were created by her father and her father-in-law who was also a sterling craftsman. The little shop was part store and part museum.

We walked further down to see Hida Kokubunji, the oldest temple in Takayama. The original building was first built in 746 but this was burned to the ground with the current building dating from 1615. All was closed that day we went but I liked the many side shrines with faded red sarubobo dangling in the rain: 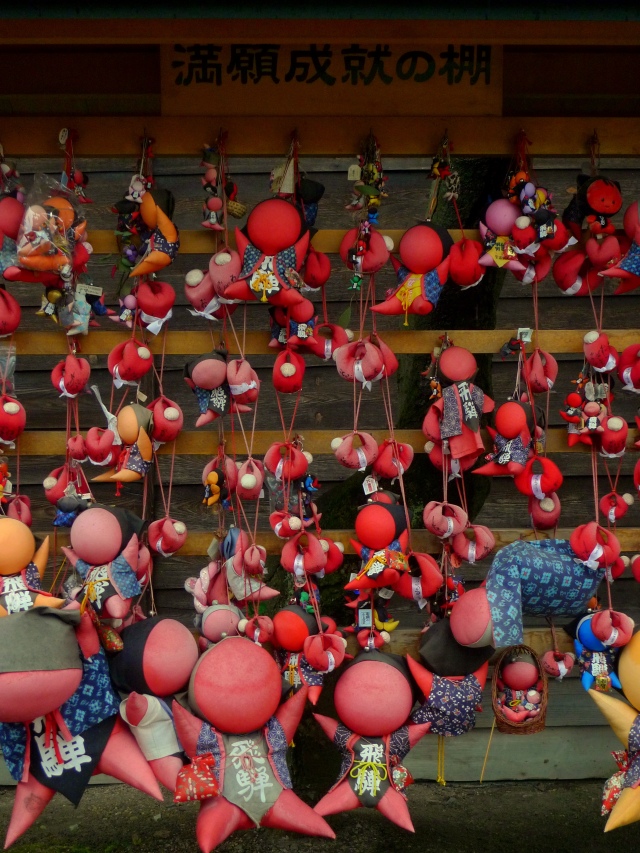 A note about sarubobo. You’ll find these faceless stuffed fabric dolls all over Takayama in the gift shops. These traditionally originated as ‘monkey’ dolls for children. They are faceless because they take on the emotions of their owners. So if a child is happy, his sarubobo is happy and if he is sad, the doll reflects his emotions. These days the sarubobo are more often seen as souvenir pieces typical of the Hida region.

I must have been on a quest for the perfect stick of Hida beef. Because heading towards the Spa Alpina, across the road from the Kokubunji, we came across a tiny shop which also sold takoyaki and Hida beef on a stick. We only bought one stick to try and would not have minded just eating on the go. Except that it was raining and the owner/chef very kindly invited – no insisted – that we come in out of the rain, sit and have the lone stick of beef kebab at the table. 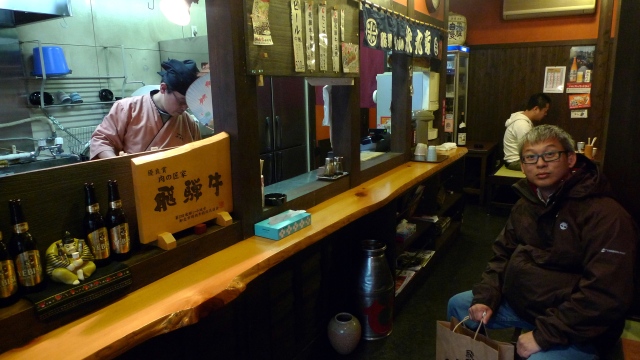 He’s a friendly guy who says he keeps his little place open till past 10pm. Had we not made plans to explore another eatery for dinner that night, we would have come back. The beef was good! 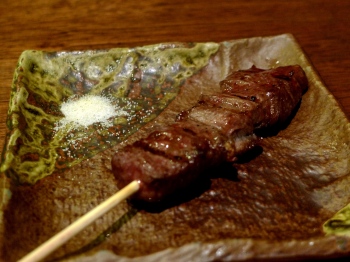 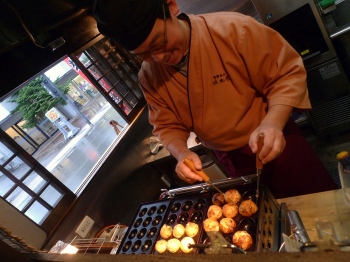 This set of directions is really vague but his cosy shop is just round the corner from Hida Kokubunji temple, three streets parallel to the Takayama train station, heading towards Ekimae Chuo-dori.

Having settled our dilemma on transport for our next destination – we decided to rent a car from the nearby Toyota outlet for flexibility – we could finally head back to the hotel for a rest before dinner, which was a short 3-minute walk towards the train station, a small izakaya-style restaurant called Origin. The Lonely Planet did not disappoint. The food was good. We had beef fried at the table in its own cube of fat (I see the health nuts shuddering but take my word for it, it was good!), rice, salad, soup, tempura and chicken innards stewed. 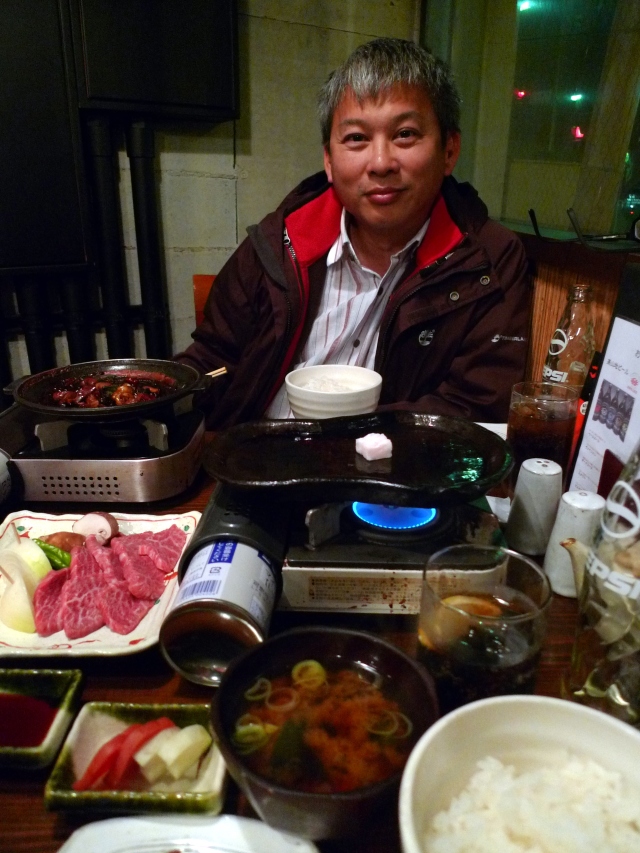 Yeah, it was a real feast!

We left feeling satisfactorily stuffed and smelling of the grill once more – yes a pattern is emerging. We just can’t get enough of Hida beef! Moo-ore please!

This entry was posted in Japan and tagged driving in Japan, Takayama. Bookmark the permalink.