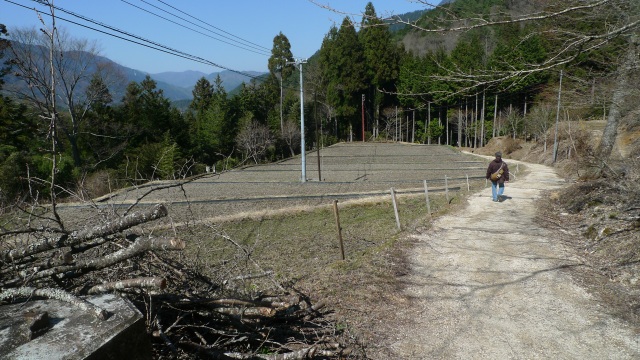 My first foray at a hike. A real hike. Not the 1km ‘hike’ to the local mall. But a real doozy of a 8km hike. The Tsumago-Magome hike is well known among travelers and well worth the effort. Your footsteps join the thousands who have walked the same path for hundreds of years. 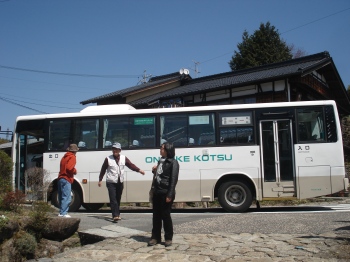 From all the reports about the Kiso-ji hike between Magome and Tsumago, it seemed perfectly do-able. Even for a couch potato like me. To make it even easier, we decided to take the bus to Magome and start from there since Magome is at a higher elevation and its always easier to head downhill than uphill!

We took the bus from the big bus lot at the back of Tsumago. From Tsumago, the bus climbed up and up and I was feeling gladder than ever that we made the decision to bus to Magome and hike back down to Tsumago. The bus dropped us at the entrance to Magome. The little town spreads downhill and across the road is the start of the hike back to Tsumago. We decided to see Magome first before walking back up the hill and starting the hike.

From this point on in this blog entry, I’m just going to let the pictures speak for themselves. So walk the Kiso-ji with me! 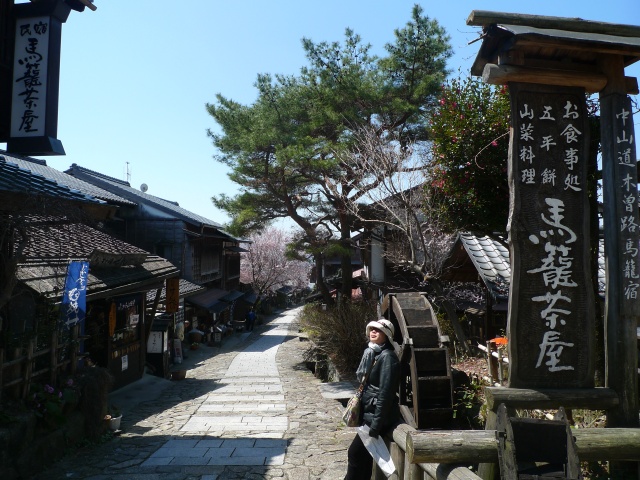 A TV crew was there that day to film Magome. We caught this later on TV in the latter half of our trip. Magome is so pristine it does not seem realistic. I know the houses and the streetscape are preserved from Edo times but the condition of the street and the houses were so good, it just seemed like they were newly constructed.

Before we commenced the hike, we rented a small bell from the TI to warn the bears away. It was not necessary since bears are rarely spotted on the trail, but it just seemed like a fun thing to do in the spirit of the hike. We also got a stamped ‘certificate’ to say that we hiked from Magome to Tsumago. 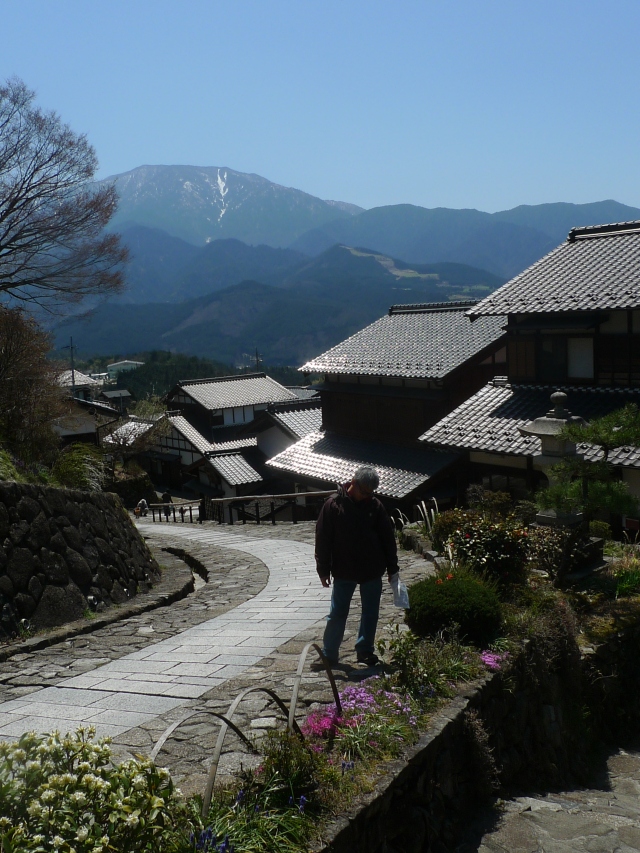 Magome straddles a hill and beyond, still a trace of snow on mountains. 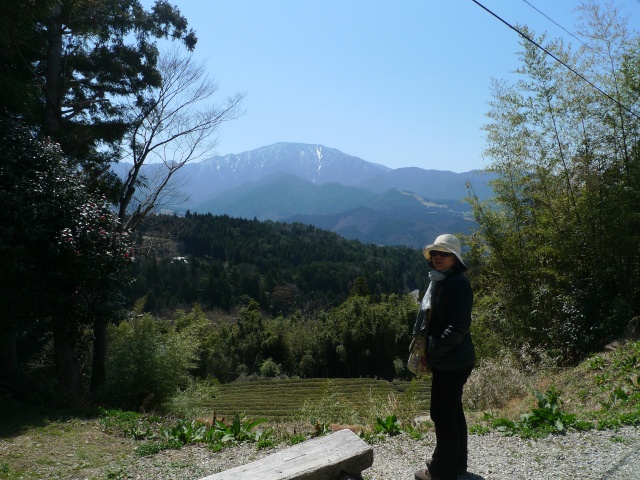 awesome view from the the top of Magome 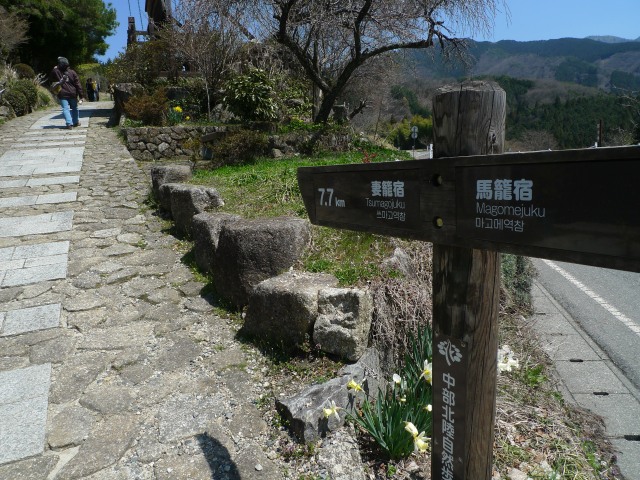 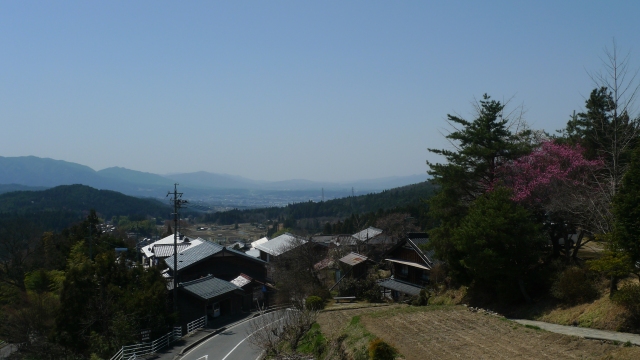 The road snakes down below. From here, except for a short hilly stretch, it’s almost downhill all the way to Tsumago. Almost. There was an Aussie couple who started hiking just before us – they passed us and zipped off while we panted our way slowly uphill. The spare tires were really taking a beating.

We passed farms, homes, small fields, now brown in early spring, walked through cedar forests, crossed bridges that straddled streams, saw waterfalls, water wheels, rang the bells to warn off the bears. It was a very pretty walk. The route covered part of the actual Nakasendo highway which used to connect Edo with Kyoto.

Some parts of the route were still the old large stone pathways. It was not easy walking on those. You had to be careful lest you turn an ankle on these uneven stones, especially when heading downhill. I can’t imagine how the Japanese use to walk these paths in the old days, especially those who were laden with heavy boxes and packages and no Timberlands with grip! 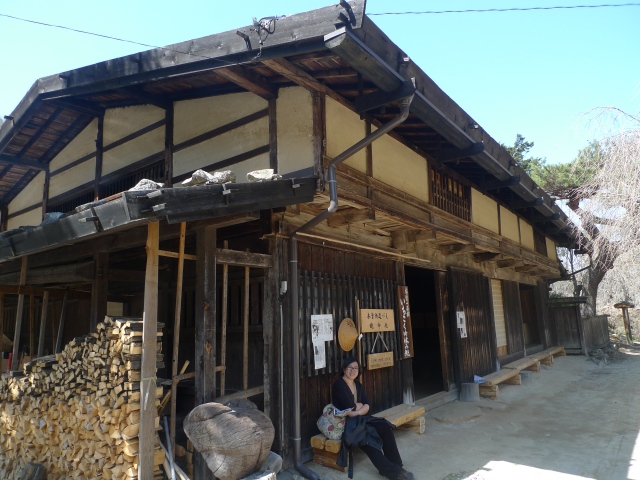 taking a break outside a rest-stop 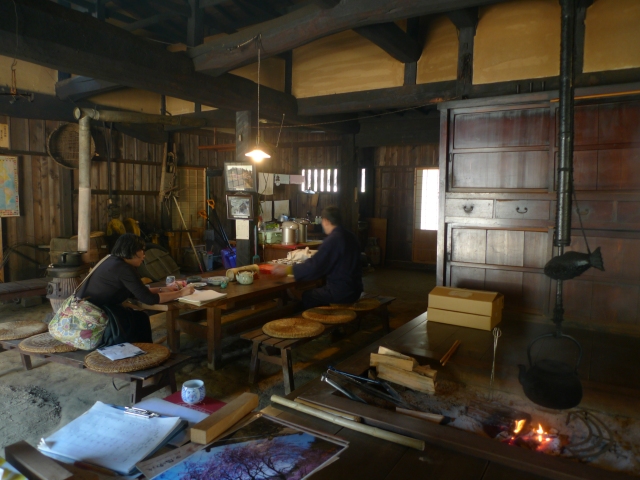 Inside the rest-house, a cheerful fire was lit in the irori, despite being a warm day. Lots of jotter books with friendly comments by visitors were piled up. I wrote a few lines to say thank you for the tea and gingko nuts. The caretaker was kind enough to crack the nuts for me. And despite the halting sign language, he was all smiles and warm hospitality. 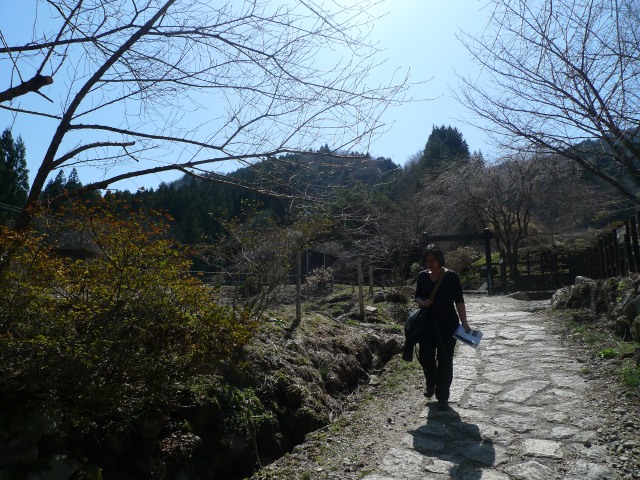 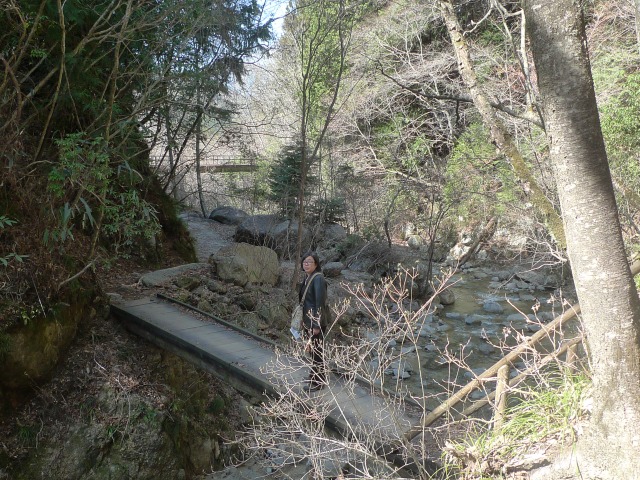 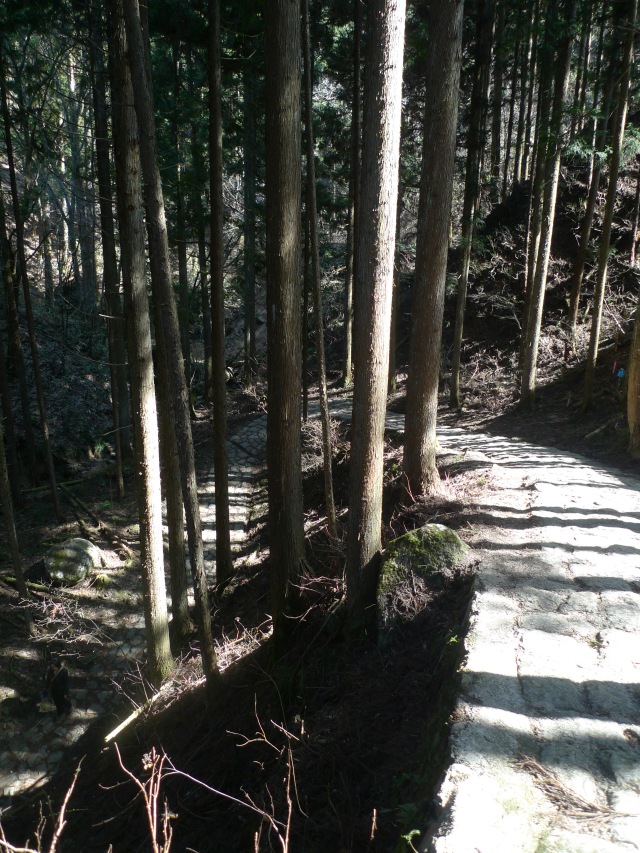 a slightly steep section of the Nakasendo. Luckily we were headed downhill! 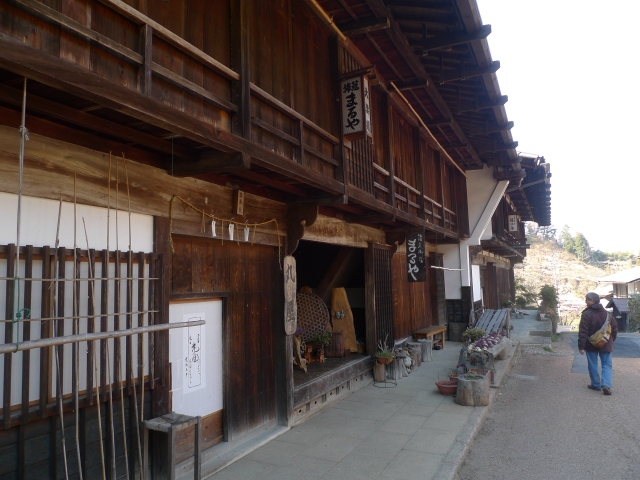 Passing through the hamlet of O-Tsumago, the last leg of the hike to Tsumago.Not all sakura were in bloom by the river, but they were pretty enough to take a short break for.

And finally, after more than three hours – we took it slow! – here we are at Tsumago! Made it in one piece with my coach potato feet still attached. 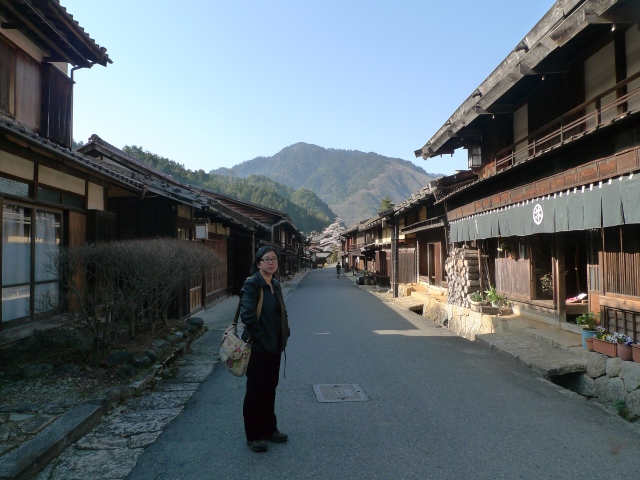 For those who want to do the hike, there is a baggage delivery service between the Tsumago TI and the Magome TI and vice versa. This service is provided daily during the summer for 500yen per piece of luggage. But in the off season, the baggage forwarding service is only available on weekends. This allows you to walk the Nakasendo unhindered by luggage especially if plan to spend one night in each town.

For us, we planned to spend the night at a ryokan in  Tsumago that came highly recommended – Fujioto.

More on Tsumago and Fujioto in the next post…

This entry was posted in Japan and tagged Kiso, Magome, Nakasendo, Tsumago. Bookmark the permalink.