Landscapes by train 2 – Tsumago to Kii-Katsuura

A long rail journey today from the hills of the Kiso-ji down to the southern Kansai coast at Kii-Katsuura. We said goodbye to the friendly Fujihara family. Hopefully, things will pick up for them soon. Mr Fujihara had asked me why we decided to come to Japan when everyone else was backtracking and cancelling. He said that after the tsunami, he had had more than several hundred cancellations for the months of March to June. But among the many cancellations pouring in by email, mine was one of the handful coming in to request a stay instead.

I hope that by now, people would have calmed down and done their homework on the risks of radiation contamination to realise that Tsumago, the Kiso Valley and indeed, most of Japan is actually safe to travel to.

First leg, a bus from Tsumago to Nagiso station. From there, a limited express to Nagoya. This took slightly more than an hour. At Nagoya, we had time to kill before taking the Kisei line down the coast to Kii-Katsuura, doorway to the next leg of our journey into Kumano.

But here, for the first time in all our travel in Japan, we experienced train delays. For some reason, the train stopped for quite some time and did not move. Or when it did move, it moved very slowly. In all, I think we were delayed for slightly more than an hour.

Despite it being a limited express, the train took about three hours to reach Kii-Katsuura. The first leg of the journey passed through residential and industrial estates. We saw houses, the occasional love hotel (you could tell which were love hotels a mile off from the slightly garish design and the discreet windows), many factories, some refineries etc.

But the second half was delightful as the train left the industrialised areas and moved inland. Here we saw farmland, rivers, small towns and lots and lots of sakura in full bloom along river banks, in the fields and the occasional splash of pink and white against the green of the mountains.

Then the train hugged the coast and it felt as if we were seeing a different Japan. Fishing towns, the blue sea, tunnels, hills. It made me think of how similar these landscapes must have looked up north too before the tsunami destroyed everything. And how vulnerable these towns were too should a similar catastrophe take place here. Seeing these places and how life goes on, made my heart ache anew for the people of Tohoku up north. 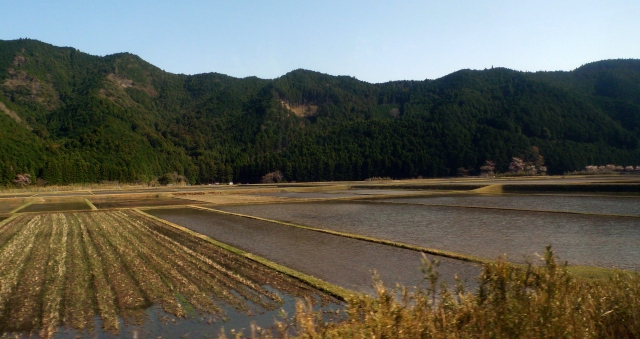 schoolgirl waiting for her ride home at a country station platform

first glimpse of the sea

a wide sandy beach curves in a pretty bay

Not sure what this strange tower is. Don’t think it’s nuclear. Any ideas?

From my notes, written in my journal on the train:

“The Kisei line winds through hills, small towns, deep valleys and now, bursting from a tunnel into the bay. I see fishing boats. I can almost smell the sea. Orange groves, Islets of green dotting the blue like round fuzzy green mushrooms.  The Pacific Ocean lies beyond. A boy on a bike. A young mother carrying a red-cheeked baby. Bamboo tips wave feathery gold in the light of the late afternoon. I feel contented. This moment is why I came to Japan – sitting in this rolling train for hours, passing landscapes both prosaic and poetic.”

While I’m here, let me pause to extol the virtues of The Toilet. On many other trains, in Malaysia, in Europe, and even on planes, I hesitate to use the loo. Thanks to all the rocking, one can usually expect some nasty spills in the the tiny space and believe me, it’s not the most pleasant of experiences to use a nasty loo, in a tiny space while trying to hold your breath, maintain your balance, do the job and not fall into a stinky puddle. All at the same time.

But here, on the Kisei line, even better than the shinkansen loos, I have found the Loo of all loos. Behold…

Pristine. Spacious. A luxury for a train or a plane. They ought to give this one a medal.

We arrived in Kii-Katsuura late in the evening. The place looked deserted, as if everyone had gone home. We were the only ones trudging from the train station to the pier. We had a reservation at the Nakanoshima Hotel, sited on a small island in the bay accessible by a three-minute ride on an orca-themed boat.

The hotel is a huge sprawling complex – several hundred rooms spread across a few wings. But as with the other places we went to, the hotel was near empty and most of the  wings were shut with long corridors left unlit and dark. The games arcade was empty but rang rather surreally with the tinny sounds of the usual bells and whistles and sound effects. In certain sections, the hotel also showed its age – patches of damp seeping into the ceiling, stains in the carpets, a slightly mouldy smell permeating some tunnels and corridors.

All this, together with sense of too much space and too few guests, gave the hotel a desolate, vaguely decayed feel. In our exploration of the hotel, we were often the only ones everywhere we went. Skyping the kids in the dark lobby close to 11pm at night was not my bravest moment.  To be honest, it felt a bit creepy to be in such a huge place with so few people around. I half expected Jack Nicholson to pop up with an axe. Guess you can tell I’m a bit of a scaredy-cat! My nerves certainly got the better of me that night.

On the bright side, the room we got though, was generously sized. And it came with a great view of the sunset. 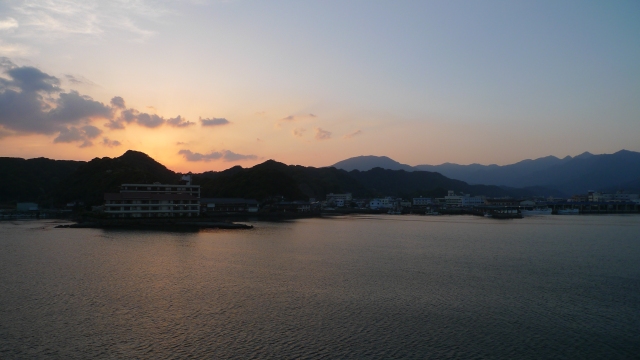 Plus, food always wins me over and dinner at the Nakanoshima was generously portioned. We ate well and we slept well and that’s really what you need when you travel isn’t it?

This entry was posted in Japan and tagged Kii Katsuura, train, Tsumago. Bookmark the permalink.