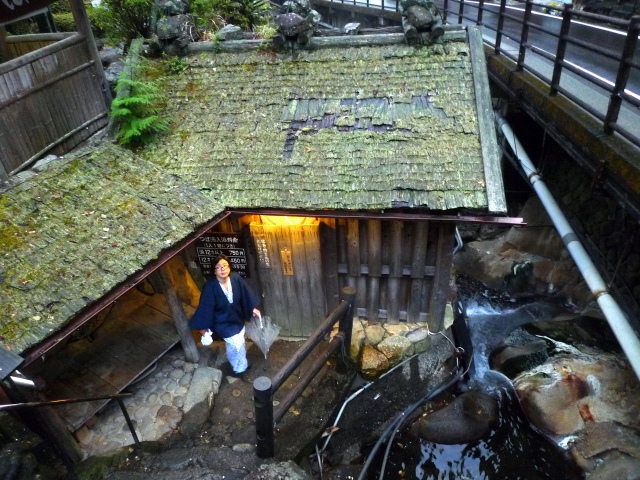 Tsubo-yu is the tiniest onsen I have ever bathed in and probably the only chance anyone could have to bath in a World Heritage Site. It’s so small that only two people could comfortably fit in there at a time.

One of the oldest baths in Japan, the water is said to change colour seven times a day. When we used it, it was slightly milky. Yunomine Onsen is said to have been discovered more than 1,800 years ago. With the strong spiritual element of the Kumano Kodo route, the bath has been used for purification and healing for many, many years.

Set in a humble mossy wooden hut alongside the stream dividing the town, the bath costs 750yen per person for 30min of use. Tickets can be bought at the nearby ticket counter of the neighbourhood sento (public bath). The ticket for Tsubo-yu also apparently gives you entry into the sento which includes a medicinal (kusuri) bath, recommended by the Lonely Planet.

But my lack of Japanese and probably lousy charades confused the guy at the counter and despite several minutes of gesturing and crossed wires, this information did not come through for us. So we decided to just stick with Tsubo-yu and give the sento a miss. I gave the folks at the Kumano Tourism Bureau some feedback and they’ve now posted clear instructions on their website to take the mystery and language difficulty out of the equation.

To read more about Yunomine Onsen and Tsubo-yu, click here.

The rain and the chill made the bath a toasty treat. Initially, the water was too hot so we mixed it with colder water, stirred it around a bit and settled in. After a day’s walk, the excitement of the matsuri, it felt so soothing to be able to sit in there and let the heat just seep into our bodies. Sheer bliss. A great way to cap one of the most memorable days of the trip.

This entry was posted in Japan and tagged Kumano Kodo, onsen, Yunomine. Bookmark the permalink.