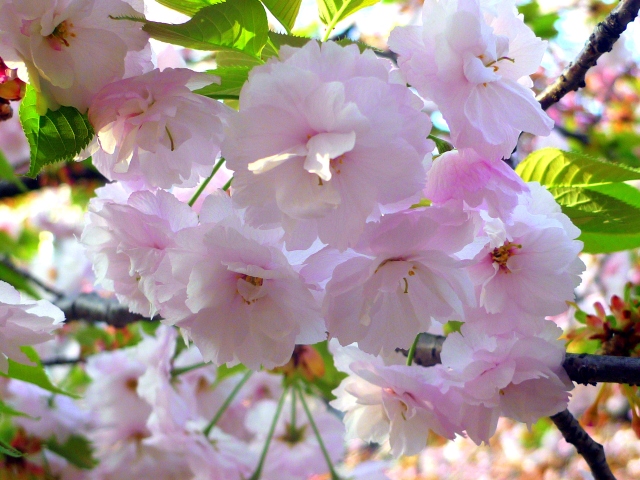 By this time, we’d been chasing the elusive sakura for almost 15 days. So far, while we’d seen some here and there, I still had not had my fantasy of walking beneath an archway of sakura fulfilled. It’s always been just one step behind or ahead of us.

I planned this trip to coincide with the sakura season but most of the time we’d been just a step too early for full bloom. And as our trip came to a close in mid April, it’s the tail end of the season so our chances to see a whole landscape of pink clouds were getting slimmer by the day.

We made our way back from Yunomine Onsen to Osaka via bus and train. 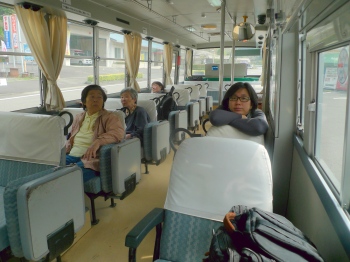 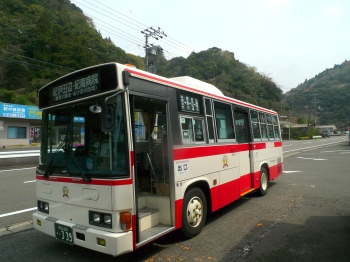 At a rest-stop, an elderly man struck up a conversation with KH. He spoke fluent English and had come to Hongu for the matsuri, something he did every year. When he heard where we were from, he was full of admiration for our former prime minister Mr Lee Kuan Yew and said he wished Japan had a “strong man” as a leader too.

The bus took us to Kii Tanabe and from there we took a train back to Osaka. Just in time to leave our bags and take the subway to the Osaka Mint in the late evening.

The grounds of the Mint Bureau are open to the public for the “sakura no tourinuke” (sakura tunnel).  There, more than 350 late blooming cherry trees are planted and  while the rest of the blooms in other parts of Osaka or Kansai would have fluttered away by mid or late April, it was still full bloom in the Osaka Mint Bureau.  This is the 128th year of the Torinuke. Transplanted since the Meiji era, most varieties there were of the late-blooming, double-petalled type: Kanzan, Shogetsu, Fugenzo, Yohiki. 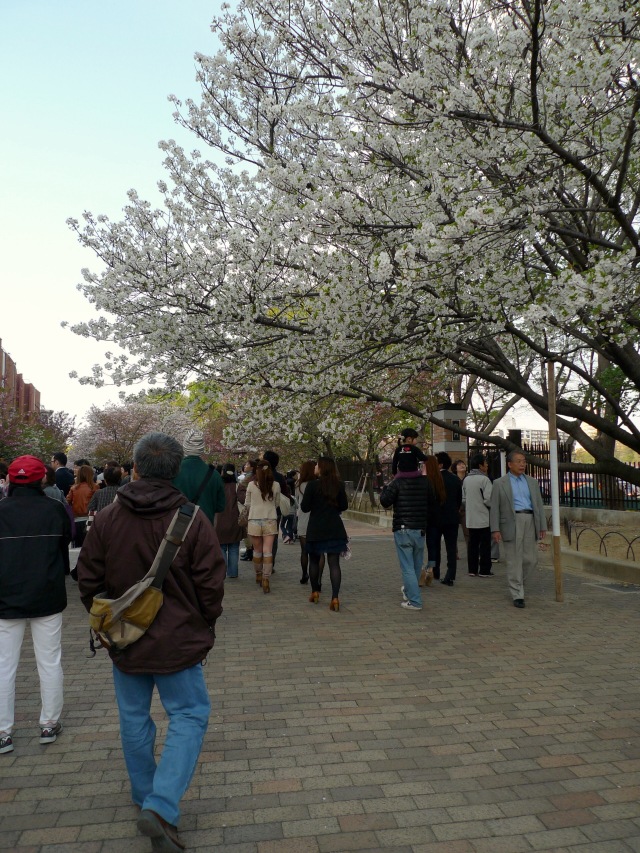 Sakura viewing is a Big Thing in Japan, in case you didn’t realise. Roads are blocked, traffic diverted, policemen stand guard, control road and human traffic. The street market comes to life. All for a bunch of flowers – amazing. It was a major production.

It was easy to find the Osaka Mint from the subway station – just follow the huge crowds! Signs pointed the way.

The tunnel of blooms at the Osaka Mint was about 500m but it was teeming with people, all with necks craned upwards, big grins plastered on their faces. The air was festive as people jostled each other for the best shots of the celebrity blooms. Armed with long lenses and impressive photo kits or the humble phone-cam, we were swept up in everyone’s enthusiasm for the flowers. More than once we gladly swopped cameras with someone else to help them get the shot they wanted and vice versa.

It was probably difficult to get a shot without anyone else in the frame, but everyone was very good-natured and polite about this and would patiently wait (a queue system automatically pops up whenever there was a particularly spectacular tree) their turn to get a picture. 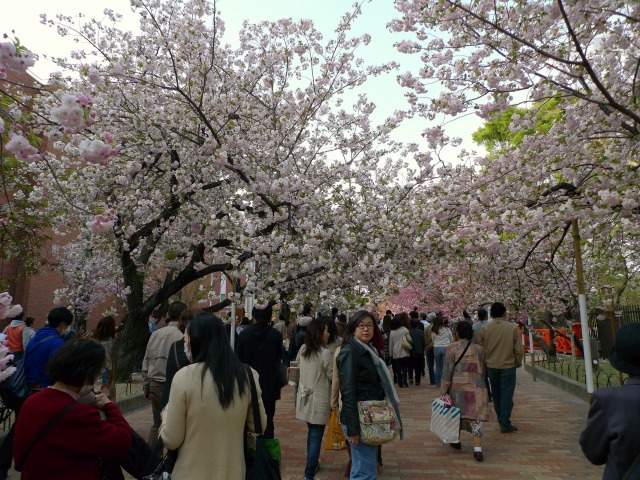 So I finally got my wish to walk beneath a tunnel of flowers – and that really completed the trip for me. At last, I have seen Japan in autumn, in winter and now, the famed sakura in spring. All her dresses are beautiful – pristine and crisp white linen in winter, pale pink chiffon in spring, deep brilliant red brocade in autumn. Only the colours of summer left for me to see. 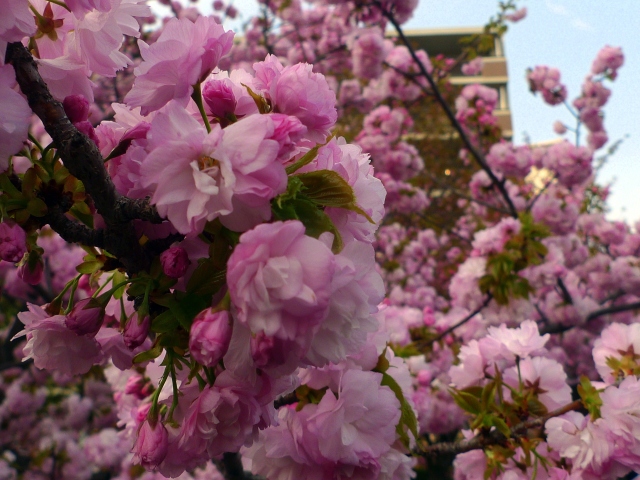 We even met a fellow Singaporean! She had been in Japan for almost three years and was based in Kobe teaching English. She had overheard KH and I talking and gleaned that we were Singaporeans from our accents. That day, she had made a trip to Osaka specifically to see the flowers. Like the others we’d met along the way, she was also curious about why we had come when everyone was staying away from Japan thanks to the radiation hysteria. Her parents too, had asked her to fly home when the crisis struck. But she refused reflecting that people “outside of Japan” tended to panic and over-react but here, so far south, things felt “normal and safe”.

We took a picture for her and she took this for us: 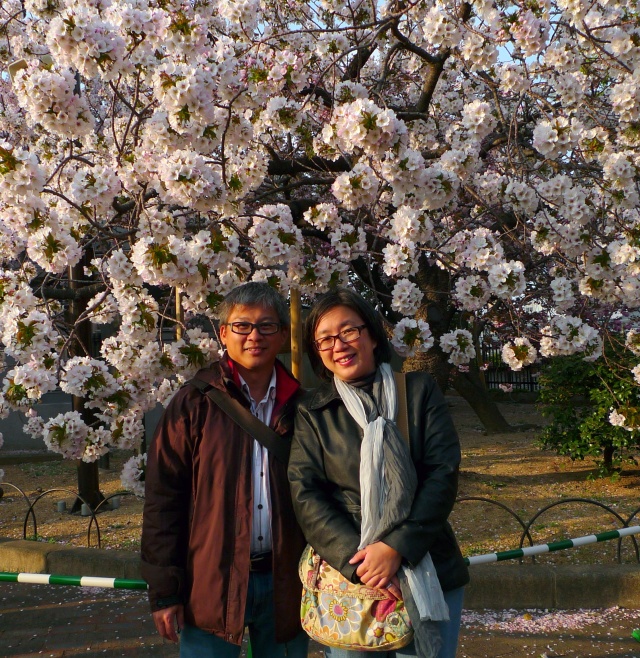 The opposite bank of the river was quieter. There were some cherry trees planted but most had lost their flowers already and had turned green. Still, some families were out for an evening under the trees and had laid out mats, with portable barbecue pits and boom boxes. It was a serene evening stroll back to the station for us.

Showy and beautiful while the sakura had been, there was a different kind of pretty in walking by the river, looking across at the action on the other bank. 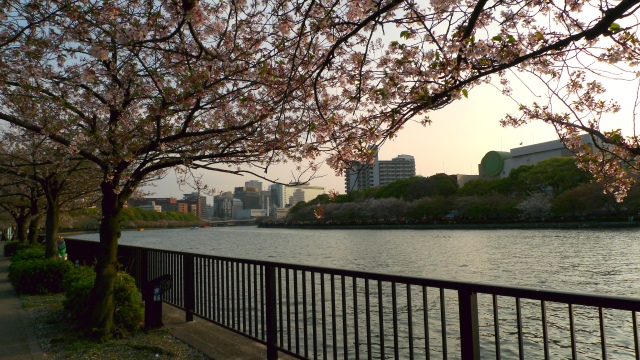 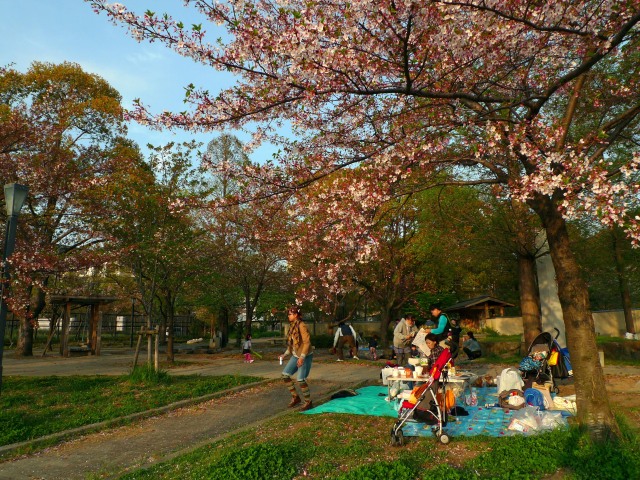 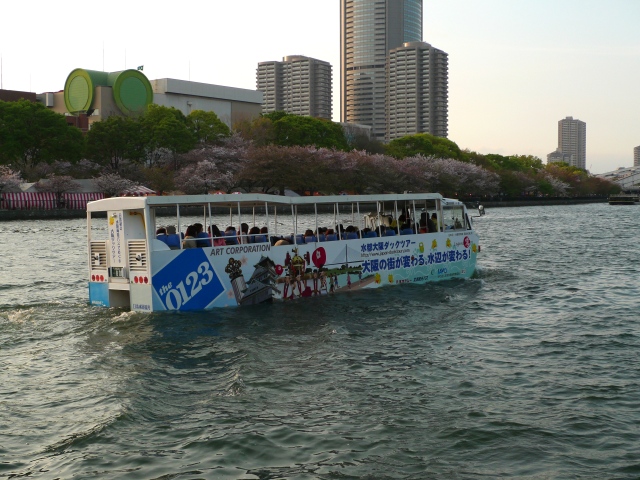 bus listing in the water! 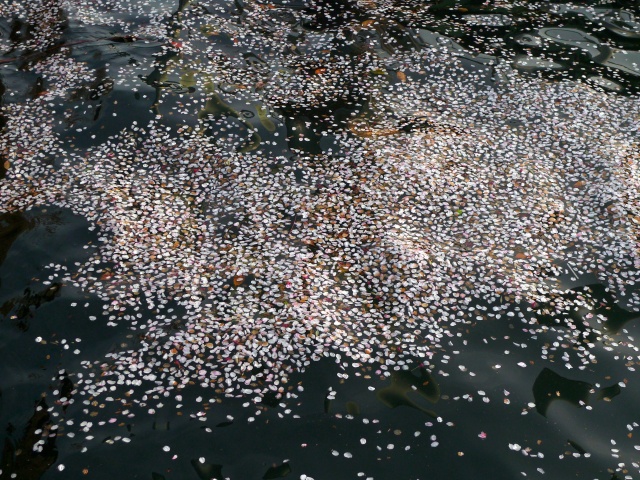 when the tides turn pink, sakura season is over.

This entry was posted in Japan and tagged flowers, hanami, Osaka, sakura, spring. Bookmark the permalink.