Ans: Knowing you got a great bargain!

Thanks to the sharp drop in visitors and tourist dollars, restaurants were pulling out all the stops in attracting customers and one way to do this is to slash prices. We received a brochure full of discount coupons for well-known Osaka eateries when we first arrived. And now, on our last night in Japan, we decided to check out the sushi restaurants.

On the advice of the coupon, we headed for Kita-Umeda and the Yodobashi building, exit 3-2. While I can’t remember the exact location, the name of the restaurant is Gyo Gyo.

We stuffed ourselves with Otoro that night. In Singapore, one piece of otoro sushi could set you back anywhere between S$7  and S$20. Yeah, just for one tiny slice of fish. And believe me, they are nowhere near as generous as this little Osaka restaurant. Here, at 400yen a pair, this was a steal. In fact, almost everything on the menu was going for 50% less. Can you hear me squee? I’m almost embarrassed at being so gleeful. Almost.

At first we were a little bit wary, wondering if the coupon was too good to be true, a bait and switch routine perhaps? But no, it was the real deal. Well, let’s just say we didn’t hold back. 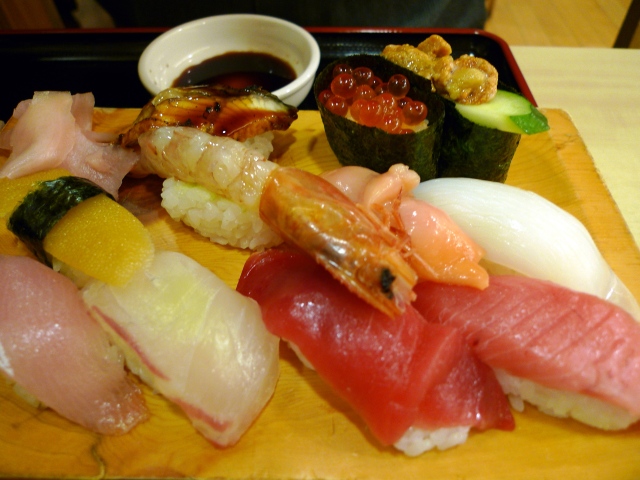 …although I did swipe his uni, his large prawn and the ikura! That prawn head? Bursting with juice. 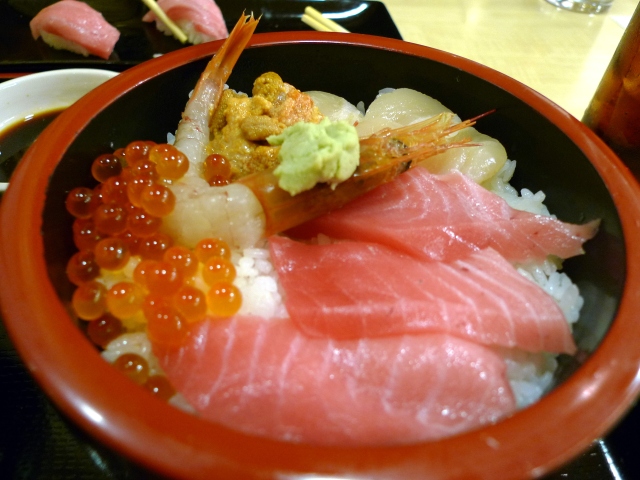 I had this sushi-don - maguro, ikura, uni, scallop and fresh prawn

That was a satisfying meal, made sweeter by the fact that it was really great value for money.

We ended our last night with a long walk to the Umeda Sky Building. To get to the top, you had to access a series of elevators and escalators. The most ‘thrilling’ part was the escalator that connected one tower with another, cutting across the void. We didn’t go all the way to the top. The views were fabulous enough from the souvenir shops.

All of Osaka lay beneath, as far as the eye could see – an intricate network of bright points of lights and neon, like diamonds on black velvet.

What captivated me most were the long lines of trains that glowed, prosaic in fluorescent, as they clacked their way over the river, bringing people home to the suburbs.

These people on the trains – what were their lives like? There they were, on their way home, another day gone. Soon, there would be calls of “Tadaima!” at some doors. I envied them. And here we were, 40 stories above, getting our first and our last look at the Osaka metropolis. Tomorrow, we would leave Japan. And as always, my heart was heavy and a lump sat in my throat. I wished I could be somewhere on that train instead, going somewhere else in Japan, traveling onwards.

I hadn’t even left yet and I was already homesick.