This is my first ever visit to Tohoku and my second time back in Japan this year after the tsunami. It is August and summer in Japan. With this trip, I would have seen Japan in all her glory across four seasons.

The famous Matsushima Bay is the first stop after a long day’s travel.

There are said to be more than 1000 islets dotting the bay, which turned out to be grey and calm that evening. In March when the tsunami struck, one of my first thoughts was – was Matsushima Bay hit? Named one of the top three scenic spots in Japan – the other two being the iconic torii set in the sea off Miyajima and the bridge to heaven, Amanohashidate, it would be really sad if Matsushima Bay was destroyed. Incidentally, having been to Miyajima and now Matsushima Bay, I need to make one more trip back to cover Amanohashidate!

Thankfully as it turned out, one of Basho’s favourite spots in all of Japan was indeed hit but not too severely and by April, was almost cleaned up, patched up and read to face the world again.

By August, there were almost no visible scars left. You would not have known that a tsunami had hit the area if not for some tell-tale signs: 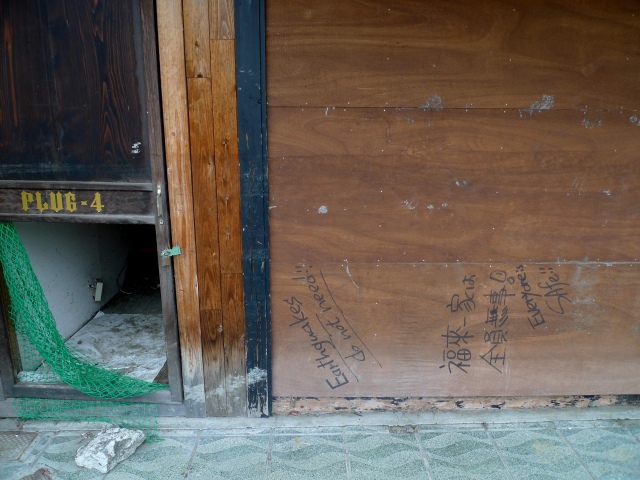 This is a shophouse left abandoned and sealed up with some muck and debris still remaining. The handwritten signs say it all.

There were some workers at work repairing a damaged facade. We were told that the waters went almost to the JR Matsushimakaigan station with barely 20m or so to spare.

The streets were largely quiet with few visitors as we made our way to the pier to take the ferry for the cruise around Matsushima Bay.

The sky was overcast and the clouds hung low over the hills. It had rained earlier, lending the islets a slightly misty air.

We asked Michiko-san our guide about her experience during the earthquake. Michiko-san, who lives in Sendai, simply replied that for the first time in her life, despite having gone through other quakes, she thought she was going to die. The tremors were so strong that she thought her house was going to split apart. Thankfully there was no damage at all. But the rest of  Sendai she said, was not so lucky. For sometime after that you could spot quake damage from the standard issue blue tarps used to cover damaged roofs and other areas. On the way in to Matsushima Bay from Sendai, passing through the suburbs, we did see some houses with the blue tarps on the roofs or walls, so not all repairwork was complete.

The feeling though is that while Matsushima Bay is quietly recovering, what is most needed are the visitors. Since the tsunami, visitor numbers have slowed to a trickle. The shops still open in anticipation but I suspect the takings are lean.

Being Singaporean, the media team was easily side-tracked by several tempting food kiosks lining the road to the jetty:

grilled squid and fat clams on the grill

The boat ride was interesting not so much for the view, but more for the flock of gulls hitching a ride on the boat and flying alongside – all the while wheeling in and out, to nip their favourite snacks out of our nervous fingers!

And with particular tastes too… Calbee prawn crackers no less! 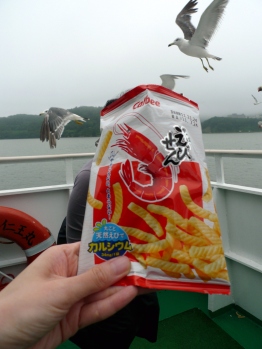 While most of the bay’s islets were wind-whipped small outcrops of pine and stone, some were large enough to contain some form of settlement. We could see some picturesque villages spreading upwards on the lower hills of some private coves and bays, oyster farms for which Matsushima Bay is famous for and yes, the occasional debris left over from March’s devastation.

In some quiet coves, we saw planks of wood, some debris floating the water and the occasional abandoned, damaged boat – even this container floating near the short (above). I guess it will take a while yet before everything can really be cleared. As it is, I think it is a herculean task which they have managed to do very well already.

One last look at one of Matsushima Bay’s islands:

Back on the mainland very near the ferry jetty, standing on its own tiny island linked by red lacquered bridges is Godaido, a small temple hall built some 400 years ago. 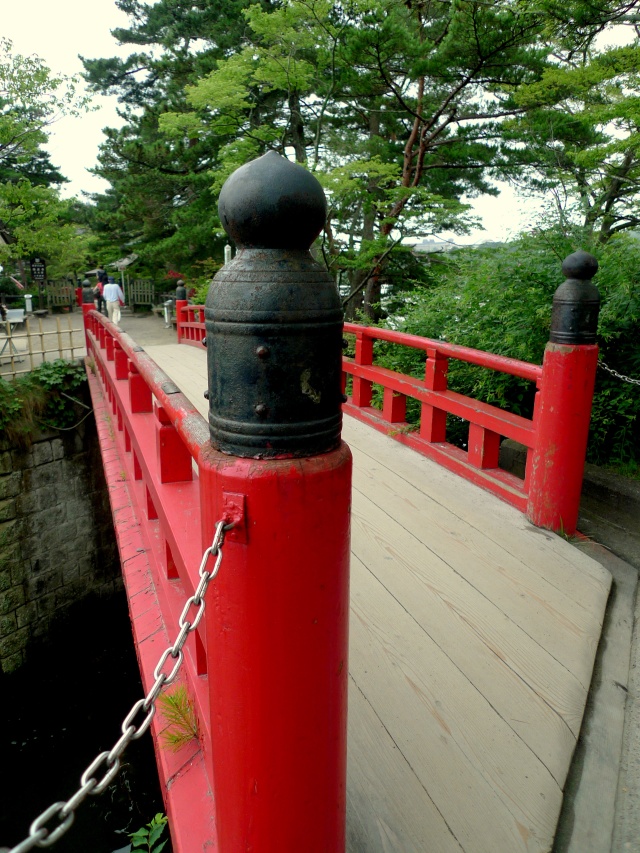 The approach to Godaido is pretty as we step over the bridges connecting each small isle. What was unusual were the huge gaps left in the floor. You could see the water beneath. Apparently this is done deliberately to help pilgrims center their thoughts before arriving at Godaido. All part of the process.

Despite the tsunami, this 400-year-old temple remained largely unscathed except for some toppled stone lanterns.

Looking pretty much as it did more than 400 years ago, it will take more than an earthquake and a tsunami to destroy Godaido, which still sits, serenely gazing over the bay.

Just outside Godaido is a food kiosk selling grilled seafood on a stick. What drew a closer look are the pictures of tsunami devastation stuck on the window.

Take a closer look at the muddy approach to Zuiganji after the waters receded (4th row of pictures from the bottom, 2nd from left). And then contrast it to this: 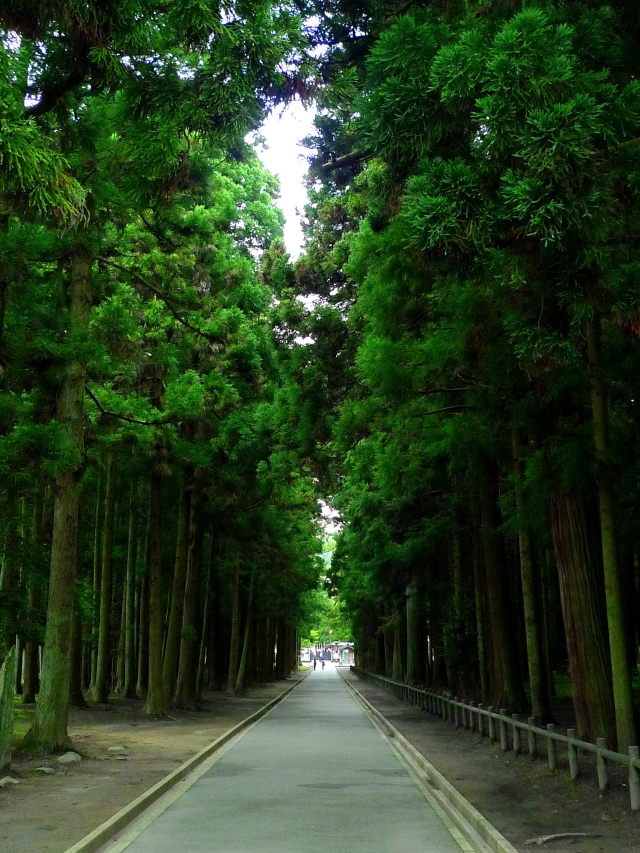 the trees stand tall and eternal

Within the grounds of Zuiganji, are rock hollows used to house ashes of the dead. The practice of housing ashes here dated from 1192 all the way until the Meiji period. 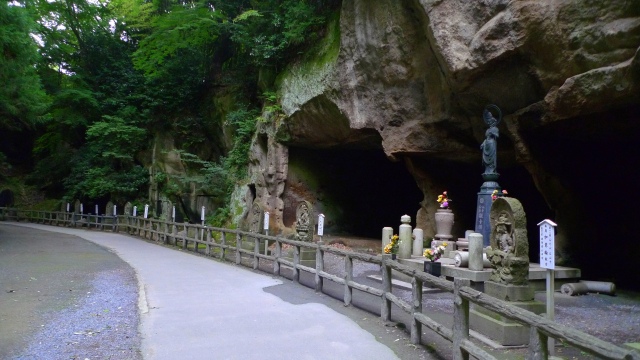 I’ll leave Matsushima Bay with just some small details which I like: 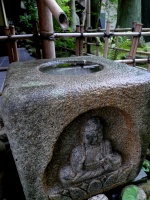 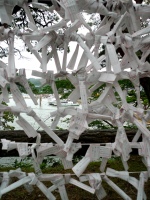 This entry was posted in Japan and tagged Godaido, Matsushima Bay, temples, Zuiganji. Bookmark the permalink.