Posted on November 2, 2011 by chongbrood

Those brollies hang out on the weathered chain link fence for a reason.

Ignore them at your peril for this is probably the most likely place in the world to be dive-bombed by a seagull. A black-tailed gull to be precise or umineko “sea cat” as it is commonly called.

Thousands come to roost here at Kabushima, on the outskirts of Hachinohe at the northern coast of Aomori prefecture. The grounds are littered with bird poo. In February the place turns into the black-tailed gull breeding convention as thousands eagerly come seeking partners.

Kabushima is home to a very interesting shrine honouring the goddess Benzaiten, who is known to bring monetary luck and financial success. Kabushima’s omamori is well-known throughout Japan. Because the word ‘kabu’ means radish, a secondary meaning is ‘stocks and shares’. So during the last major economic downturn, Japanese businessmen flocked to the shrine to collect the omamori. At one point, stock (of the omamori!) actually ran out.

But in case you’re too far from Hachinohe, there is another Benzaiten shrine nearer Tokyo. In Kamakura, the Zeniarai Benzaiten shrine is often visited by those who petition for good luck and wealth. There is a spring there where visitors literally wash their coins in the hope of multiplying it.

I don’t know if this works but I like to collect interesting omamori from the various shrines I visit throughout Japan, so I bought one ‘radish’ omamori just for luck. 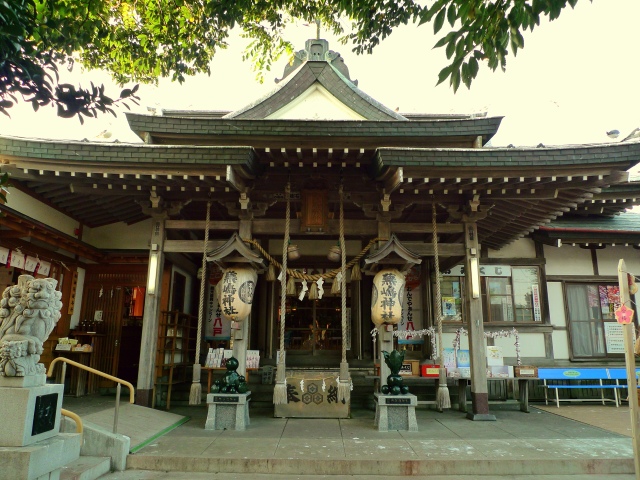 more gulls than humans on this quiet evening 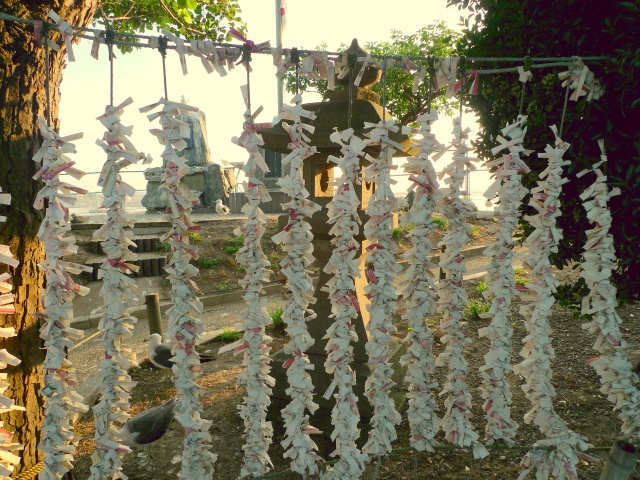 Part of the fun of going to shrines is to pick up an omikuji, or fortune slip. I was thrilled to find English omikuji at Kabushima. As tradition holds, a poor reading is discarded by tying it to a branch, a line or a string anywhere on the shrine grounds. Most shrines provide a structure to hold discarded omikuji.

I guess that’s a good way to treat a fortune slip – if you don’t like what you read, give it away! Because really, your life’s paths are yours to make and should not be dictated by an omikuji!

I liked what mine said however, so my omikuji is still with me. It’s not hanging with the others back at Kabushima (above).

It all looks so serene now. But on March 11, Hachinohe was also hit by the earthquake and the tsunami.

There is an interesting story to tell about that.

This shrine attendant at the Kabushima shrine told us that on that morning, she was on duty at the shrine.

She had noticed something strange that morning: the gulls were all gone. Perplexed at the unusual absence but not making too much of it, she finished her shift around midday and went home.

The gulls must have known what was coming because the tsunami struck about two hours later.

The waves first hit the island from the back before rushing round the front and crashing at the red torii. The picture taken below (courtesy of Kabushima shrine) shows the waters rushing in.

The shrine, being on higher ground, was safe. But observers on the mainland who saw what had happened thought Kabushima had been decimated by the force of the tsunami. It was only when the waves receded that they realised that Kabushima only sustained very minor damage. As with Godaido Hall in Matsushima Bay, only the stone lanterns were damaged. The torii was unscathed.

Look at the small house in front of the torii. This is what is left of it today:

If the waves could tilt a house like this, it makes seem even more amazing that the torii could escape any damage.

Some chalk it down to the protection of the kami on the shrine. Others explain that Kabushima acted as a buffer, taking the brunt of the waves. As a result, the damage in the area was not as bad as it was in many other places. About 200 houses were damaged and the number of casualties was also far less than many other places along the coast.

It was humbling to stand there and look out over the bay, seeing the port, the houses and realise how normal everything looked when just a matter of months ago, water had roared in and swept away so much.

I gazed at the gulls. They survived all that. Chalk it down to geographical luck, the protection of the kami or whatever,  I was glad they did. They would carry on for years roosting and breeding on this island. I was glad Kabushima made it.

And I was also glad that by the end of the visit, I had not been ‘bombed’ since I had eschewed the brollies after all. One lesson learned years ago in pigeon-dominated St Mark’s Square in Venice, that if you do get bombed, resist the overpowering urge to wipe. Wiping only smears and makes you wail louder when you see the damage later. Best to just let the poo dry and then just flake it off. 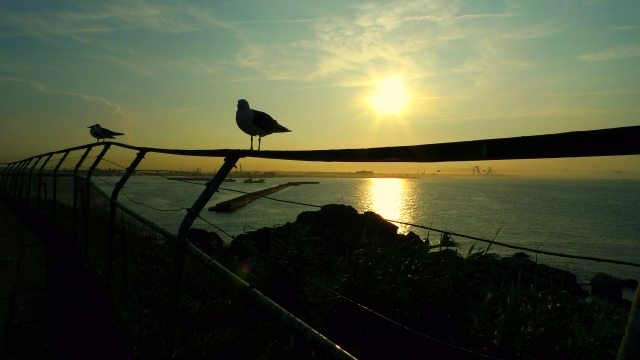 This entry was posted in Japan and tagged Hachinohe, omamori, omikuji, shrines, Tohoku. Bookmark the permalink.