This succulent piece was actually not the best durian we savoured during our trip up north. But it happens to be the only picture we took after licking our fingers clean in between durians. We were too busy the rest of the time, savouring the wrinkled golden flesh of the other durians. This being June and the height of durian season in Penang, indeed all of Malaysia, we had to honour the king of fruits by making that long drive up north. Malaysia is known for its hawker food – cheap and very good – and this particular trip was a foodie hunt unlike our other trips. The durian was just one in an all-star line-up.

But I’m getting ahead of myself here. Can’t help it. I get really excited when it comes to good food. I’m going to blog about this city by city and not so much according to the actual itinerary. So first stop – Ipoh.

We drove seven hours from Singapore to get to the city that tin built – Ipoh. The once flourishing miners town is a lot quieter today and quite a few of the old shophouses have seen better days. But in certain parts of town, crowds gather in the common quest for good food. We stayed at the newly refurbished French Hotel right in the heart of town and within walking distance to many of Ipoh’s foodie spots.

Cutting across an alley and then crossing two roads led us to Jalan Leong Sin Nam where a cluster of dim sum restaurants vie for the title of “The Best Dim Sum in Ipoh”.

We heard of Foh San but the spanking new building seemed closed when we were there. Across the street is Ming Court, looking little changed from the 70s, complete with panhandlers at the door and five-foot way looking for handouts.

Inside, the place was packed with Ipoh locals at the tables and waitresses carrying large trays crammed with all types of food. The minute you sit, they come with their offerings. A bit chaotic because you’re looking at three different trays at any one time and trying to decide which delectable morsel to pick. The chatter runs in Cantonese and our fractured Singaporean Mandarin is a dead giveaway for us as tourists. Local or tourists, the service is brisk, efficient and warm. And the food – solid. Everything came freshly steamed and piping hot. The usual suspects – harkow (prawn dumplings), siewmai (minced meat dumplings) were all very well done. Suffice to say we had a good breakfast that morning. A bit pricey at RM108 for all six of us but a good meal all round. 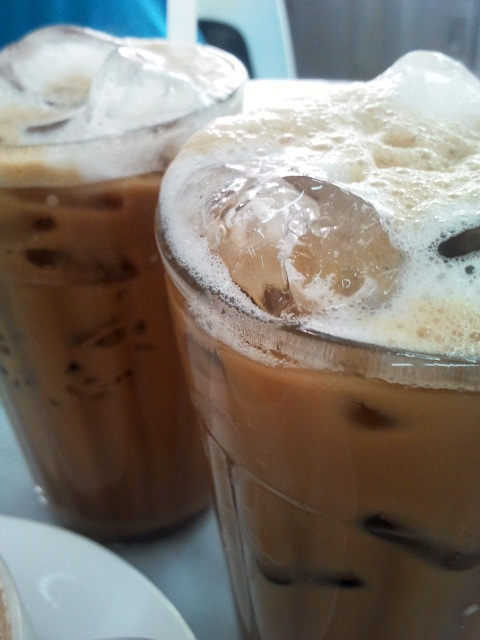 Its open to dispute of course. The competitors stare each other down from across the street. Some say Sin Yuan Loong is the original source. Others say it is Nam Heong. I think history has blurred the lines and unless you are a real white coffee fan, it really does not make much of a difference. So we flipped a coin and chose Nam Heong coffee shop.

Frothy on top, with little of the usual bitter aftertaste, I found it pleasant and sweet, preferring the icy version to the hot. The coffee shop is also known for its char koey teow which we did not try. Having just had breakfast at Ming Court – yes this was second breakfast! – we settled for some kaya toast and soft-boiled eggs – standard coffee shop breakfast. The eggs very cutely came in a teacup and served (we approve!) Hokkien style with light soya sauce and pepper instead of the usual dark and thick soya sauce. 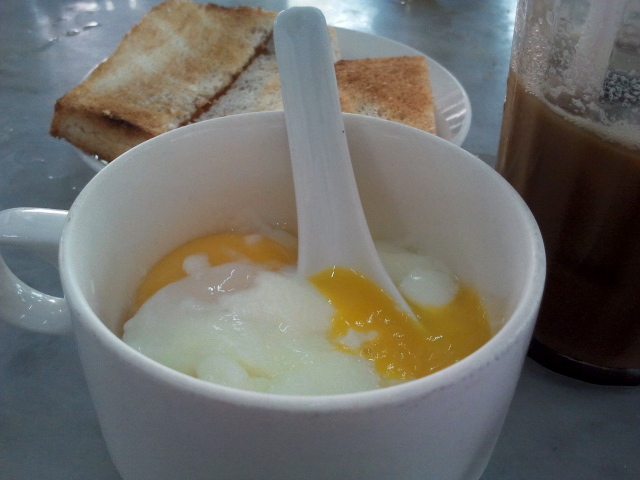 Nam Heong was not only well-known for its coffee, it’s also known for its egg tarts. I had originally wanted to try the famous Hock Kee tarts – just about 200m away from the hotel. But sadly it was closed. The place usually sells out its tarts by 10am after opening its doors at 7am – that’s how good it is reputed to be. Unfortunately for us, the place was closed. Nam Heong’s tarts were also highly recommended so we gave it a shot.

Flaky yet firm to the bite, the pastry was not overly dry. The egg custard was not too soft and neither was it too sweet. With some tarts, biting into the custard sometimes causes it to run and ‘leak’ a bit of sugary water. Not this one. Neither was the bottom of the pastry soggy. At about RM1.30 each, this was a nice afternoon tea’s fix on our road trip.

This is one of my favourites on this trip. Funny Mountain’s Tau Fu Fah – warm bean curd served in a little bowl of syrup. Funny name for some serious tau fu. This is a tiny hole-in-the-wall shop that opens from 10.30am and closes when they’ve sold out – usually by mid-afternoon.

KH and I just enjoyed sitting on a bench at the five foot way watching all this going on and enjoying the tau fu fah. My favourite is the above – a mix of soya bean drink with black grass jelly. Light and refreshing. 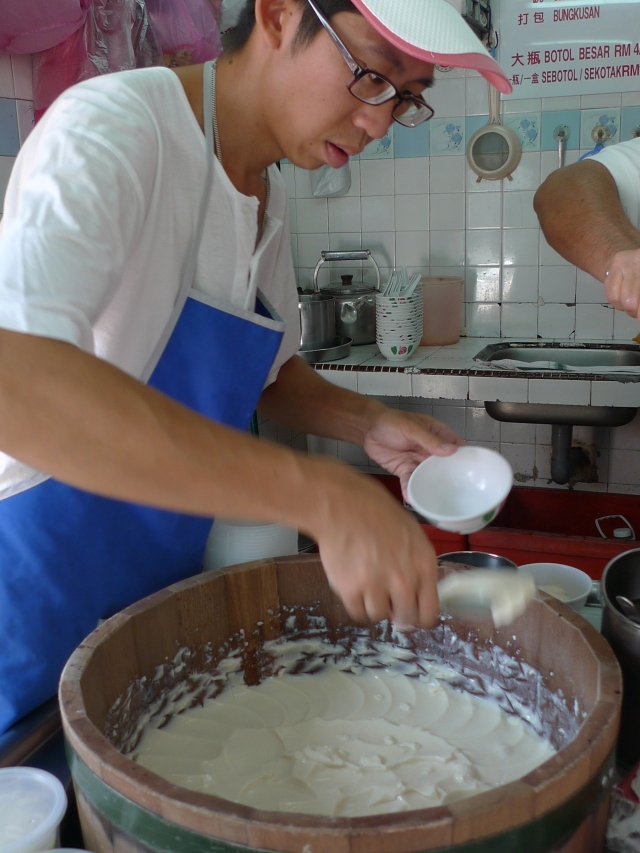 Slurpilicious tau fu fah being dished into a bowl. The wooden tub it comes in is really old-school. Maybe it adds to the taste?

Finally, also in the vicinity of Funny Mountain and one street down at the famous Jalan Yau Tet Shin is a modest coffeeshop selling wanton noodles in the morning. At night, the juncton bustles with competing action from the two famous Ngau Choy Gai outlets – Oon Kee and Lou Wong. But in the day, the place becomes very quiet and the only place that is open for brekkie is Comeson Restaurant which sells wanton noodles.

Run by a husband and wife team, the wanton noodles come tossed in a lighter sauce than the usual Malaysian wanton noodles. The noodles themselves are different – thinner and springier, firm to the bite and not as soft. It comes plain – with just blanched veggies and the wontons are served in a light clear broth on the side. No slices of char siew which again sets it apart from the norm. If you’re a meat-lover, try the pai-kuat noodles which comes with braised pork ribs. Otherwise this may just come off more bland than usual.

Personally, I am more used to the southern style of wanton noodles – tossed in chilli sauce or sambal. I prefer the kick the chilli gives. But the wanton noodles I find in KL, Ipoh, Penang etc are all doused in black sauce, no sambal. The only chilli is the cut pickled green ones on the side. But despite my preference, I did enjoy the wanton noodles at Comeson.

That summarises the food we had at Ipoh this trip. We also had the Nagu Choy Gai at Oon Kee for two nights in a row – the kids fell in love with the silky smooth kway teow noodles in soup. Paired with green chilli padi, it was also my favourite. No pictures because we were too hungry and probably too greedy.

Next stop: Penang! The Pearl of the Orient, but also the jewel in the crown in terms of Malaysian food.

1 Response to Munching through Malaysia 1 – Ipoh