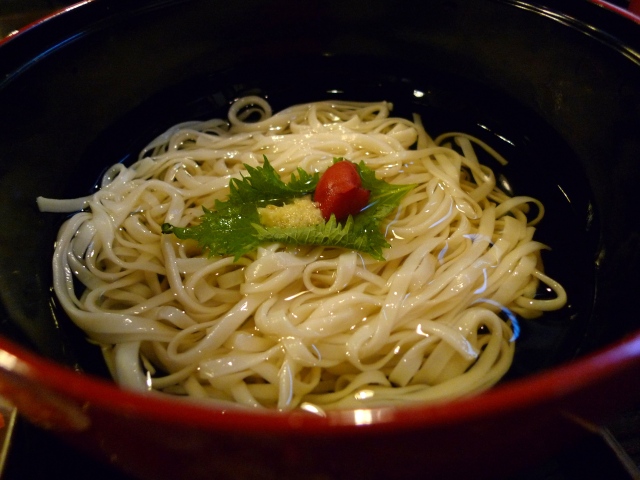 Summer food means food to chill out with – literally. The Spanish have their gazpacho and all the way in Japan, summer food means noodles in chilled broth. All created to cool you down on a hot summer day. Not all cold noodles are the same though. This far north in Akita prefecture, Inaniwa udon is the area’s specialty and undisputed star.

This is  Hyakusui-En. It’s been serving (and perfecting) the art of Inaniwa udon for more than 350 years, its secrets handed down from generation to generation. The result is a rather unusual udon – flat and thin instead of the usual thicker square cut. Somewhat like linguine perhaps but softer. You barely need to chew it – it slithers smoothly down before you really can even bite into it. 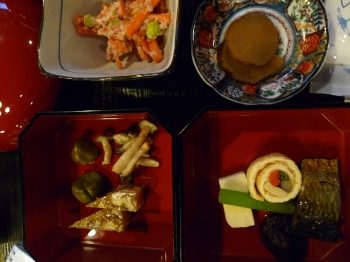 The noodles are this smooth because of the techniques used in pulling and stretching the dough. The very act of pulling it over and over again gives it numerous microscopic holes, which helps add to the airy, smooth texture and enhances the taste as you slurp the noodles up with the clear umami broth. Again with the broth, no surprises, it comes from the staple dashi/konbu stock ubiquitous to Japanese kitchens.

The wonder of Japanese food is always, always its light touch. Pared down to the minimum, fresh ingredients and a light hand with sauce and flavouring always ensures that less is really more. The bowl of udon comes garnished with a shiso leaf, a dainty piece of ume and grated ginger, all of which do not overwhelm but just refreshes the palate as it complements the light stock and the noodles.

As if the bowl of noodles was not enough, it came as part of a set that included other traditional food such as smoked radish (iburidaikon) and other small side dishes. And what Japanese meal is complete without rice? In this case, it was a generous serving of kuriokowa – steamed rice with chestnuts.

All very good, which resulted in cleaned out bowls, very full bellies and a bunch of drowsy journalists by the time we climbed back into the bus. Good thing we were headed just a short ride away to Kakunodate’s samurai district where we could do some walking!

Although particular to Akita, Inaniwa udon is famous throughout Japan.

Sawado Masaki, who owns Hyakusui-en says that at one point, about 40 years ago, there were only four producers of Inaniwa udon. The recipe had been a closely guarded secret.

But because there was a shared concern that skills would erode and disappear with time, the udon-makers decided to share their recipe with others. So you could have similar Inaniwa style udon elsewhere but having it here, in Hyakusui-en’s 413-year-old building, makes it a very special meal indeed.

Hyakusui-en is a wooden house with dark wooden beams and pillars. On the walls hang framed tapestries. The distinctly western bent of the tapestries lend an odd touch in this traditional setting but weirdly or not, I like the little art deco touches here and there. But oh who cares as long as the food is good? And it definitely is. Meat-lovers may be disappointed to know that this is a no-meat menu – they only serve vegetables and fish. Trust me though, this is one meal where you won’t feel the absence of meat. 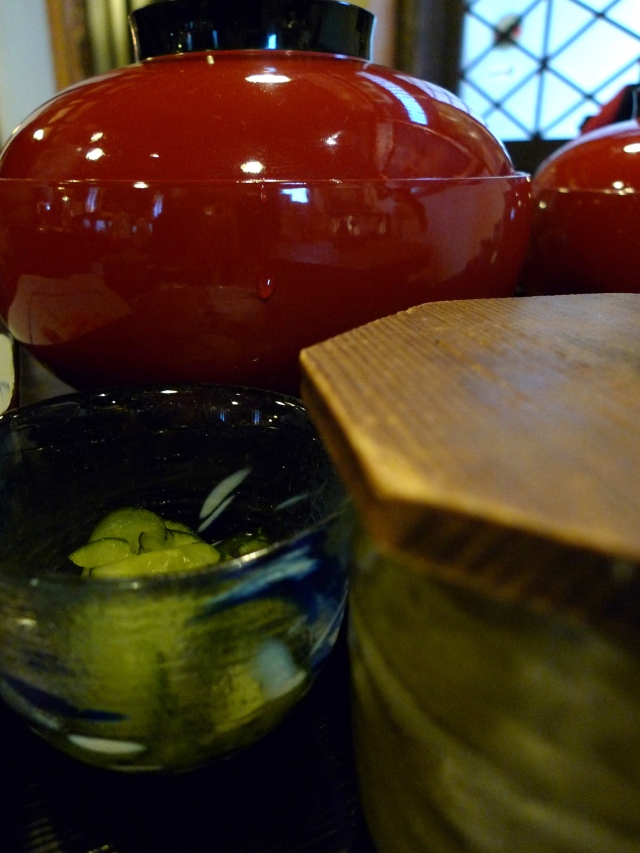 Coming from Singapore where it is hot year-round, our soupy noodles usually come in piping hot soup. So I thought cold noodles would taste weird and somehow, wrong – same reason why I never really took to gazpacho. But then one taste of Inaniwa udon is enough to convert me. In the heat of summer all you really need to perk you up from the wilting heat is a cool bowl of noodles.

This entry was posted in Japan and tagged akita prefecture, food, Tohoku. Bookmark the permalink.