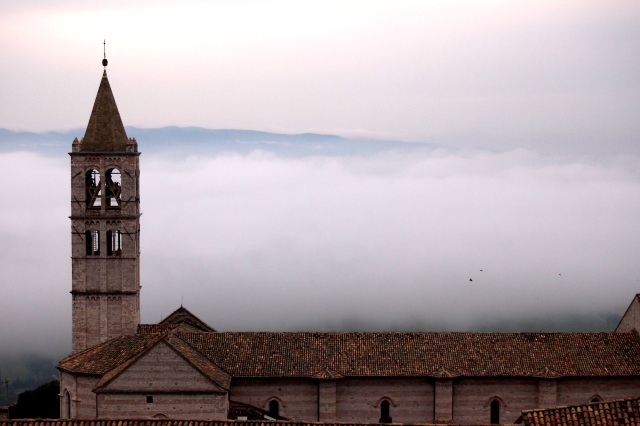 The clouds roll in very quickly in the morning. I took this shot from my room window on the third floor of the Hotel Ideale Turisti at the top of the hill in Assisi. Soon after this, the church and the hillside of terracotta and stone houses below was covered in mist, cloud and rain. It felt melancholy and contemplative. But I suppose St Francis, friend of Brother Sun and Sister Moon would also have felt just at home with the mist.

Not my first time in Assisi, but the last trip was a rushed one just to see the basilica and we never had time to really wander the old streets that wrapped round the hillside. This time we had to, simply for the fact that our hotel was at the other end of town from the basilica, up on the highest point of the hill.

I chose the Hotel Ideale for its top-of-Assisi views. Being at the doorstep to the Piazza Matteoti where the bus stops is handy. We didn’t have to wheel our bags far and on the drizzly day we left, we were also glad we didn’t have far to walk in the rain to catch the bus. But more importantly, it promised and delivered great views. Assisi sprawls lazily far below us. It is the quintessential Italian hilltown view – bell towers, cupolas, domes and in that ancient faded pale stone that turns pink in the morning light. From my room window, I hear nothing but the wind and birdcall.

We walk through town, a very slow 20-minute stroll across town to St Francis Basilica. Passing and exclaiming along the way, on unabashedly touristic shops that sell souvenirs and Francis merchandise. The saint is on every magnet, statuette, tile, t-shirt you can find. He and his band of monks are depicted as alternately solemn, contemplative and prayerful, and then cute, roly-poly cheerful and playful. You can’t not walk away from a souvenir shop without taking home a magnet or two of Francis and the gang. The modern day pilgrim not only goes to pray but helps the Italian economy along with these trinkets. 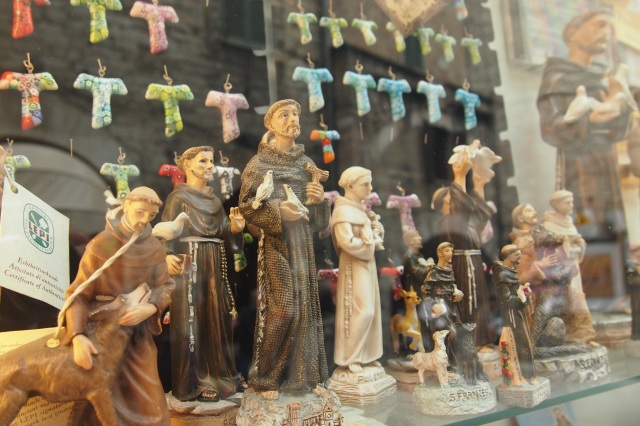 It is Sunday, so there is a bit of a drowsy, contented air about the place. We see families emerging from church and then heading into restaurants for lunch. Assisi is so spread out that most of the crowd action is around the piazzas. 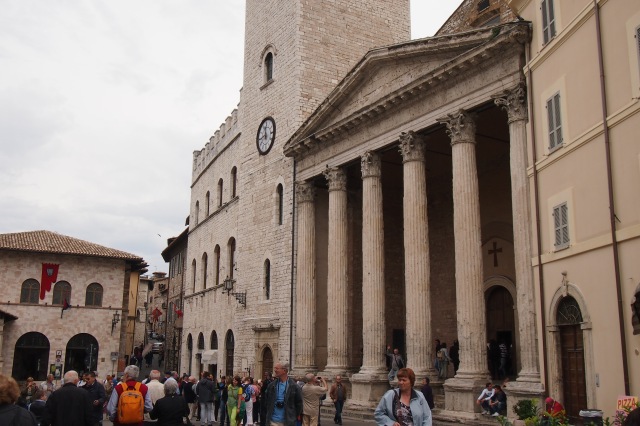 In the busy Piazza del Comune, the 2000-year-old columns still stand. In another Santa Maria sopra Minerva, Mary the Virgin Mother of Christ has taken over another of Minerva’s temples.

Away from the piazza, into the many lanes up and down the hill, the crowds thin out. I like the little details that caught my eye and here they are: 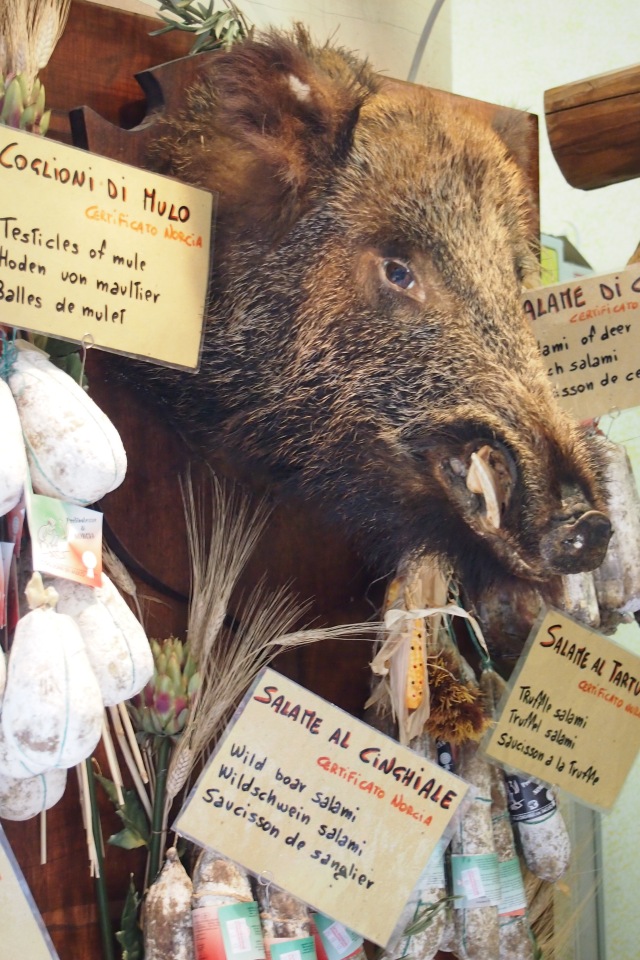 Mules testicles anyone? How about head of boar?

All set for an Italian adventure.

They look good enough to eat. We are drawn to this shop by the heavenly scent of hand-made soap. They come in different blocks and weights, in so many varieties. We bought a few. The green tea one smelt fantastic. It was used up in less than a week. Wish I’d bought a larger block. I still have one more of rosemary. I’m saving it. I’m not sure why.

This is one of the better human statues I’ve seen. Drop a coin in the box and it will move. We grin as we watch it make a little girl cry as it looms gravely over her to give her a tiny souvenir. I drop a coin in myself to see what kind of ‘fortune’ I would receive. I got this – in three languages:

Seemed good advice for the anal-retentive, stressed-out control freak that I am. A good reminder that I was on holiday for heaven’s sake and not to sweat over the teeniest details.

The crowds meet us again at the forecourt of the great St Francis’ Basilica, headquarters of the Franciscan order. Being Sunday, we could not get a tour by one of the Franciscan brothers. This is a pity because the last time I was here, the tour given by an American Franciscan monk was so good, he brought Francis’ story to life with Giotto’s beautiful frescoes as illustration. This time, we just had to do without. 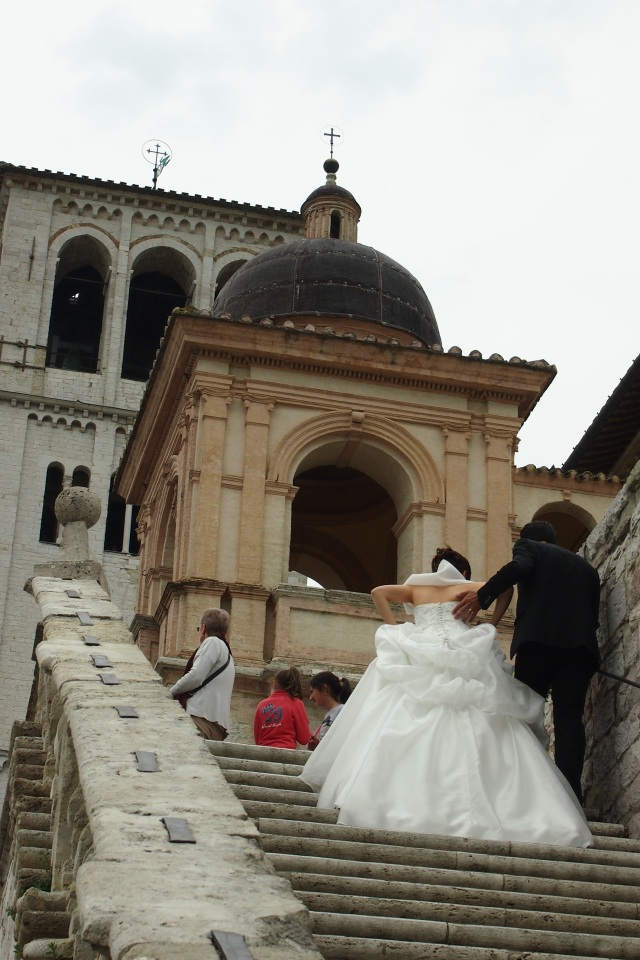 The lower Romanesque church was cool and dark but even then it looks brighter than I remembered. St Francis’ resting place is a simple stone box set high in a central alcove, surrounded by his most faithful and beloved band of brothers. Before moving from the lower church to the upper church, drop in to a small museum of sorts to see the clothes (very well-patched!) and sandals (looked so similar to Japanese straw sandals) worn by Francis and other memorabilia.

Rose window of the lower church with a tiny mosaic fresco of Francis below. 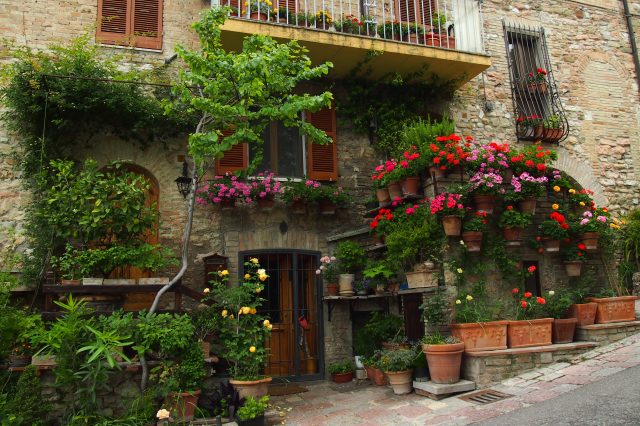 A house in a quiet section of Assisi. A riot of green framing a doorway, just one of the many pretty houses we saw along the way.

Can’t leave Assisi without stroking one of the few cats we saw, in the hometown of all animals’ patron saint right? This guy was fat and friendly.

new posters against an old wall. I like the water fountain.

one of the many lanes that snake uphill.

This entry was posted in Europe and tagged Assisi, church, Italy. Bookmark the permalink.