NOT the Sound of Music tour!

I admit it. I am a Sound of Music fan. A big one. I grew up on a diet of re-runs of The Sound of Music, My Fair Lady and all those grand old musicals. I know the dialogue by heart and can sing all the songs – in fact we even learned them in school and one of my earliest school-day memories is of earnestly singing My Favourite Things in my nightgown one early Sunday morning to my mother when I was probably about 9 or 10. There I stood, hands clasped in front, my mother watching me with a faint smile on her face. Only now do I suspect she was trying hard not to laugh.

So imagine my glee when this diehard fan realised we were going to the very place where the hills came alive with the sound of music! Salzburg! I could care less about Mozart but I would not miss the SOM (Sound of Music) landmarks! And the best way to do this? A tour… at least that was what I thought. On hindsight I guess I should have trusted my instinct about tours. Either I never learn or I am incredibly optimistic. Probably both. 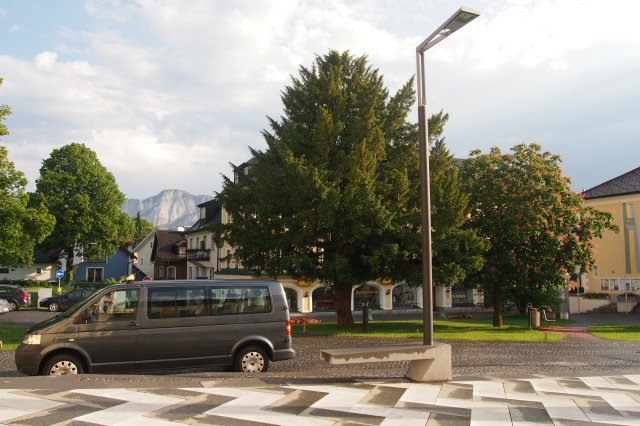 SOM was and still is a huge money-spinner for Salzburg tourism and there are numerous tours offered to fans like me. I did my homework, read up on all the options and settled on Bob’s Special Tours. They were small, intimate, and promised the personal touch with a van instead of a bus etc and best of all they came recommended by European travel guru Rick Steves. At €45 per person, this was not very cheap but I was happy to be kitschy for an afternoon and see SOM come to life.

Instead all I got was an afternoon stuck in the back of a stuffy van (little to no air-conditioning for the first half hour), trying to see what the driver/guide was trying to point out.

At the first stop, the Mirabell gardens, we were given just 15min to see the place and when we were 5min late, we got snide remarks from the guide. Hey, the place was large, it was a long walk back to the van and my mum was not well. Maybe he was trying to be humorous but I didn’t think it was funny. I apologised for being late but thought he should have cut us some slack.

I won’t add any pictures of the Mirabell gardens since you could probably get loads of the same online. But I found an interesting busker, only in classical Salzburg:

harpist busking at the Mirabell Gardens.

The rest of the ride was just a sheer waste of time. The yellow wall and tree-lined lane where Maria’s bus trundled as she went to the Captain’s house for the first time? Was a blur yellow line across a 100m field, pointed out to us as we whizzed past on a parallel road.

Two mansions were used to depict the Captain’s mansion in SOM with most of the scenes taking place in the back gardens of one – which we saw from across the lake. Having a 150mm zoom lens sure came in handy then:

The graceful iron gates fronting the lake was where Julie Andrews and the boat full of children capsized – again and again in many takes.

I thought the serene lakeside setting from which we viewed the mansion with a handful of joggers and resting cyclists and a troop of cute ducklings was a lot more interesting: 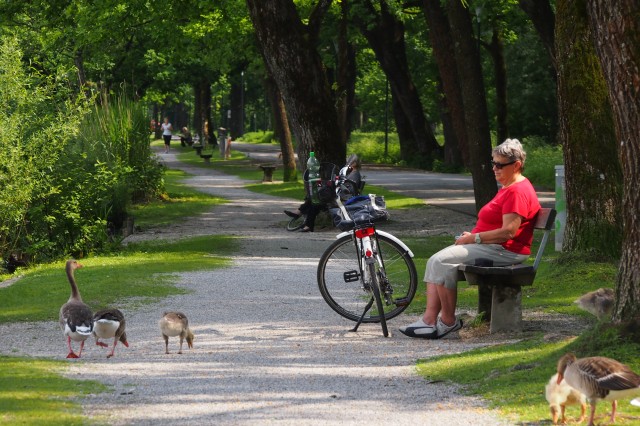 The only two places were we got to see up close was the gazebo (which was not in the original place in the movie but shifted to the outer garden of the Hellbrun Palace grounds where it seemed placed more like an awkward afterthought) and the church at Mondsee. 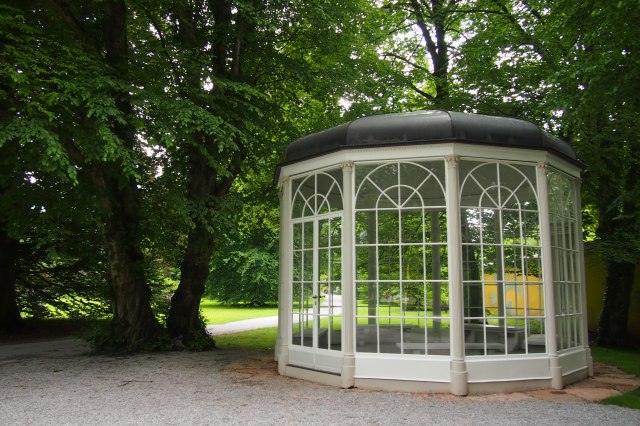 my obligatory shot of the famous gazebo – which was locked thanks to too many tourists trying to be Liesl and Rolf. 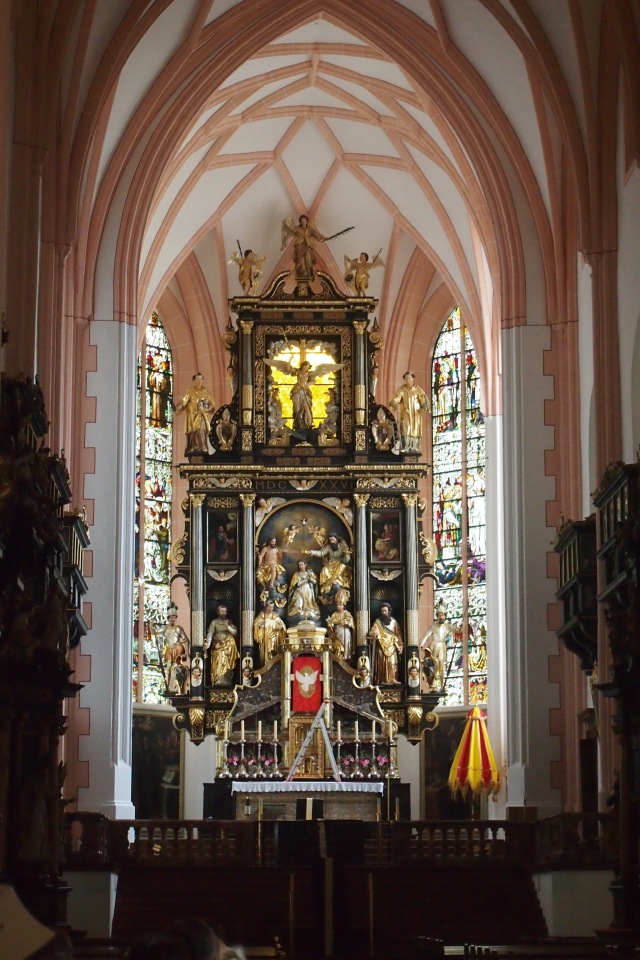 Inside the church at Mondsee where the wedding of Captain von Trapp and Maria took place. Mass was on so I had to discreetly zoom in and take this shot.

Believe it or not, the rest of the time, a good 1 hour at least was spent whizzing round the Austrian countryside outside Salzburg stuck in a car with the soundtrack of SOM blasting. Half an hour of this and my sister and I were rolling our eyes and trading frustrated looks. I felt bad because this was my idea. I roped them into this. And we were just stuck here paying for an expensive ride around the Austrian countryside. It was raining outside, so chilly that it rained hailstones – which put paid to the other reason why I chose Bob’s Special Tours – the opportunity to go on the luge. Just not my day. I just thought the tour was awfully padded up with little substance.

The only saving grace was the food stop at St Gilgen. We had stopped for coffee – anything to get out of the depressing rain. But the little cafe surpassed our expectations. It served fantastic beef goulash, black forest cake and apple strudel. The goulash was certainly one of the best I’d ever had. It was rich, full-bodied and the beef cubes were generously-sized and so soft you could cut through it like butter: 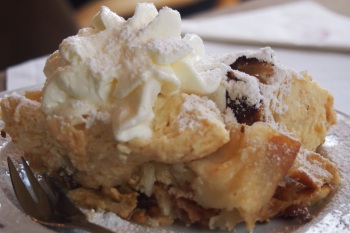 The glassed-in cafe was bright and cosy with wicker furniture and baskets of flowers. It was the sort of place I could spend hours in with a good book, a pot of tea and unlimited servings of goulash and strudel! When the rain stopped, all of St Gilgen spread out below and the view was lovely:

So if you’re ever in the vicinity of St Gilgen and want some kick-ass goulash, find it at 50, Pollach, St Gilgen. The name of the cafe is Muhlradl. At least I think that’s it. Or it could just be a big beer advert! Who knows, I don’t read German!

Lesson learned: save your money and stick to the DVD if you’re really a SOM fan. You’ll get to see more of the SOM locales that way. If you really have to get on an SOM tour, get the one for the bigger buses. That way, if you really are stuck on a moving vehicle for hours, you get a larger window view! Finally, “small and intimate” might not necessarily cut it if you don’t have chemistry with either the guide or your fellow passengers.

I am writing this months after the trip and so this is a more mellow version somewhat tempered by time. But a couple of months ago, I was so furious that I wrote a scathing review on Tripadvisor. If you want to read it, it’s here.

This entry was posted in Europe and tagged Austria, food, Salzburg. Bookmark the permalink.