Independent travel in China with children

BigonTrips was started to document the trips I made with my large family and to prove that independent travel with children in tow need not be expensive nor difficult, that children are very adaptive travelers and with their deep and natural curiosity, can be very rewarding travel companions as well. This and the next couple of posts will go back to the roots of this blog to talk about this as I document our recent trip to China.

We had not traveled as a family for a few years – mainly because it was hard just to co-ordinate everyone’s schedules. Yes the children also had very busy schedules that we had to work around! In the end, we could not travel with all five of the children, due to school vacation calendars clashing. So only four came with us. They range in age from 16 to 7. We chose China over Japan this time because we had traveled to Japan several times already and I wanted to show the children something different. Plus, the parent in me thought – nothing like being in China to bring Chinese lessons to life and hopefully inject some enthusiasm into learning Chinese along the way! Ha.

I’m going to kickstart this series with an overview of the trip, the itinerary we followed, the amount we spent and key highlights and learning points before delving into destination reports.

China was a totally new destination for the children. Cait had just returned from a short training stint in Shanghai with her gymnastics team but other than that, none of the other kids had been to China before. So this being our first family trip to China, we decided to make it a relatively easy one, largely based in Beijing for most of the days and traveling out by train to see Pingyao and the World Heritage sites near Datong. By train both places were not far from Beijing, easily reached by overnight trains. 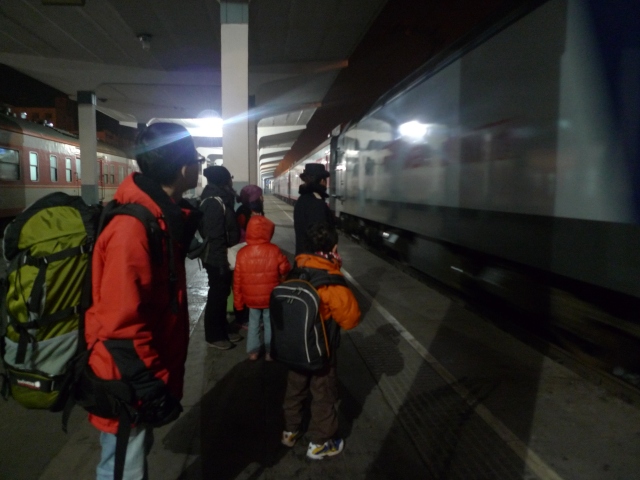 We spent in total, SGD$9000 (about US$7300) for the entire trip – this includes airfare, accommodation, train fares, transport, meals, entry fees and shopping. That’s the entire bill for our family of six for 9 days of travel in China. Caveat here was that we used Krisflyer mileage points for air travel to and from Singapore but note that we had to pay for the usual surcharges which were hefty. On hindsight, we realised the surcharges alone were almost equivalent to tickets we could get on the market so it didn’t seem worth it to use mileage points for tickets.

I spent quite a lot of time agonising over the itinerary – in particular the stretch at Datong. I was not sure if the kids could take the pace of overnight travel and then arriving in the early hours of the morning for a full day of sightseeing before catching yet another overnight train to Pingyao.

Plus there seemed to be quite a lot of unknowns – the day trip to see the Yungang grottoes and the Hanging Temple hinged on us finding CITS Datong and the very well-known Mr Gao. But we were arriving early in the morning when it is still dark and nothing is open. With four kids, in an unfamiliar station, unfamiliar town, in sub-zero temps, no prior hotel booking etc, there was just so much uncertainty. If I traveled solo or with KH, it would not be so bad – we could just wing it but with the four kids, I was hesitant if this was do-able.

From before we left to the first few days in Beijing, I worried and fretted about changing plans for something more certain eg cancelling our train tickets, flying in the night before to Datong and spending the night in a hotel there was one option I was seriously considering.

But in the end, the children surprised me. In Beijing, they noticed I was preoccupied and so I laid out our plans to them, gave them the option, spelled all the uncertainties out and told them my worries. We discussed all the pros and cons and at last the kids said they thought we should just stick to the original plan.  They didn’t mind the uncertainty, the possibility that they might be too tired, wandering in the cold in the early hours of the morning etc. They pointed out very practically – the train tickets were already booked, it would be waste of money to let them go and they breezily said it would be no problem with the hectic pace. They ended up reassuring ME that it would be alright. When you have kids like that, why not? So we stuck to our plans and the kids were great – true to their word, they didn’t complain, their energy levels never flagged and we all just rolled with the punches.

I booked our train tickets online at www.chinatripadvisor.com based on other traveler reports which I found online. It is slightly more expensive than going there and buying it yourself but I thought the peace of mind, the lack of hassle etc was worth the surcharge. The tickets were sent to our hotel and when I received them from the hotel concierge, they were presented as is, no envelope, no invoice, no receipt etc. It was as if someone bought tickets and just handed them over to the hotel concierge. I thought they would be at least enclosed in an envelope, but not these. I thought it was weird but everything seemed kosher in the end.

We paid these fares:

In Beijing, to see the Great Wall, we hired a car and driver for RMB1000. The driver was highly recommended in online forums. He had a MPV that could seat seven comfortably. RMB1000 was a full day of sightseeing that included the Great Wall at Mutianyu and the Summer Palace. Johnny Yellowcar could speak fluent English. His car was absolutely pristine. In the weeks before the trip, we communicated via email to fix a date, pick-up time and location. He always responded promptly. His website is: www.beijing-driver.com

Other than that, we took the subway everywhere we went. It was easy to do and cheap (RMB2 a ride anywhere regardless of distance and Trin went free since she was below 1.2m). The ticket machines had an English version which took the guesswork out of the process.

Beijing subway is comprehensive and quite extensive with more lines in the works. After a while we learned to time our rides. Rush hour was sheer craziness. Even with trains coming at 3-min intervals, we had to shove or be shoved into the trains. Sometimes we were separated and had to improvise to meet at the next station. The kids were both taken aback at the congestion and the tidal wave of commuters and thrilled enough to dive in and out of train compartments like body-surfers at a rock concert. There was even a weird code that I got used to. Squashed up against the doors, someone inside would catch my eye and nod towards the door. Sometimes one would say: “Xia che?” and if I were getting out, I’d nod and when the doors opened, we just pushed out in one nicely co-ordinated flow! I loved it. Instant transport camaraderie bonded by exhilaration of getting out a crowded train in one piece and in time! You’d never get this at home. Here, whenever we need to get out, we just shuffle out, no eye contact.

We chose the Park Plaza Wangfujing for the first sector in Beijing for a couple of reasons. They had glowing reports on Tripadvisor and other forums and were highly recommended by the Lonely Planet as well. But more importantly, they were right next to a subway station (Dengshikou). This was important because I didn’t want to grapple with long walks to and from the subway station in the cold, particularly after a long day of walking and sightseeing and possibly with a cranky seven-year-old in tow! The hotel’s location was great also because it was near a major road (with great local shopping!) and also about a km away from the Wangfujing retail action. As it turned out, the Park Plaza ate the largest chunk of our travel budget. We upgraded to two suites which fitted our family very comfortably and it came with a generous buffet breakfast that was fuel for the day’s hard work. The plush comfort was also something we looked forward to after a long day. The level of service was top-notch. So for me, that little luxury was worth it. 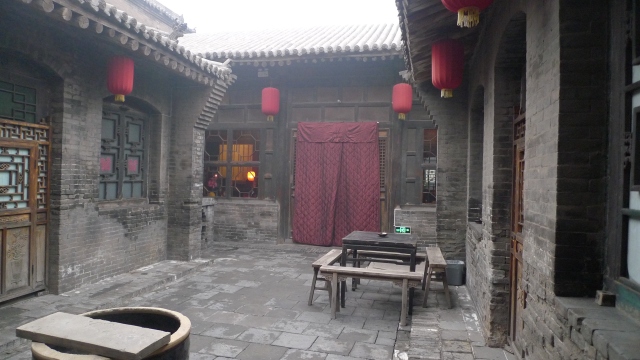 In Pingyao, we stayed at the Yide hotel. Again we got a suite which comprised two bedrooms with ensuite bath facilities and a small sitting room. Yide is in the old town of Pingyao and the buildings were traditional siheyuan. Our suite alone took one wing of one of the siheyuan. Again, a very comfortable stay but I thought the breakfast was a bit of a rip-off. At RMB50 for two sad slices of bacon, one fried egg, two pieces of toast plus a drink, I thought it was overpriced. The Chinese breakfast was way cheaper but the kids didn’t enjoy that.

Back in Beijing for the last two days, I decided to try a different style – a boutique hotel in a restored and refurbished siheyuan in a Beijing hutong. The Shichahai Shadow Art Performance Hotel was renovated such that it did not look anything like your typical hutong hotel anymore. But I liked its style and look and the fact that it was themed along the fading art of shadow puppet performances. The only thing it had in common with other hutong hotels was its smallish-size rooms. Service was indifferent though, particularly at night but the owner/manager was warm and efficient.

All reviews of hotels we stayed in are on Tripadvisor. Look out for the Chongbrood moniker. 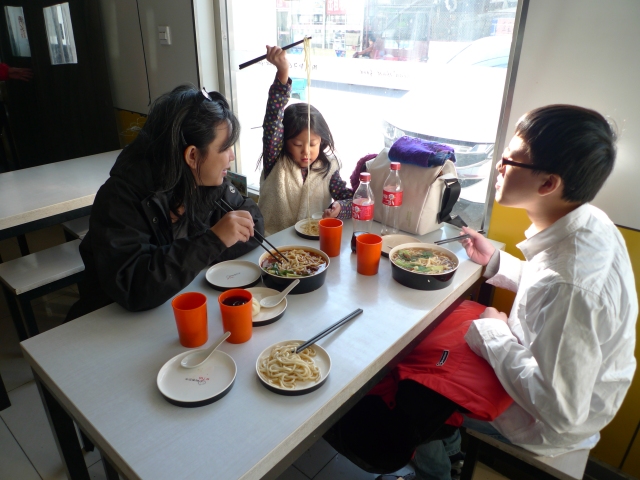 Because the kids are already big fans of noodles and because Chinese food was not foreign to us, food was not a difficult issue. I have to confess though that we did occasionally resort to the golden arches for some meals but mostly, we ate local. The children took to the beef noodles that were sold everywhere. We thought Mr Lee’s beef noodles (China’s fast food beef noodle chain) were probably better than McDonalds.

Some memorable meals were in a hotel in Pingyao, a lamb/beef hotpot in Beijing’s Houhai district, a dumpling shop once patronised by the emperor Qianlong near Qianmen (all thanks to the great travel and food recommendations found at this blog called Paul’s Travel Pics!) One of the best meals we had was at a tiny pizza place buried into a hutong in Houhai with one of the most inconspicuous entrances I’ve seen. But I’ll get to those in a while.

2 Responses to Independent travel in China with children