Walking through Qianmen and Liulichang

The thing I enjoy most about travel is sometimes not so much seeing the major sights as if they were on a checklist but rather to just wander around, get a little lost and make little discoveries.

Second day in Beijing saw us visiting the Lama Temple or the former palace of the 4th Prince a.k.a the controversial emperor Yong Zheng. To be honest I didn’t enjoy that part but as a fan of C-drama “步步惊心”, can’t help a thrill to know I was walking where the 4th prince walked. Okay, so allow me some romantic drama licence here – Nicky Wu has done a whole lot of swoony good for Yong Zheng’s tarnished image as the prince who allegedly stole the throne out from under his brother.

The former residence of the prince was converted to a temple which is still very much in use today. For some reason though, it was bitterly cold in the huge complex of halls and courtyards of the Lama Temple and I couldn’t wait to leave. The afternoon was a tad warmer and lots of more fun as we wandered through the Qianmen area, down the lanes of Dazhalan and into the antique shops and old bookstores of the Liulichang district. 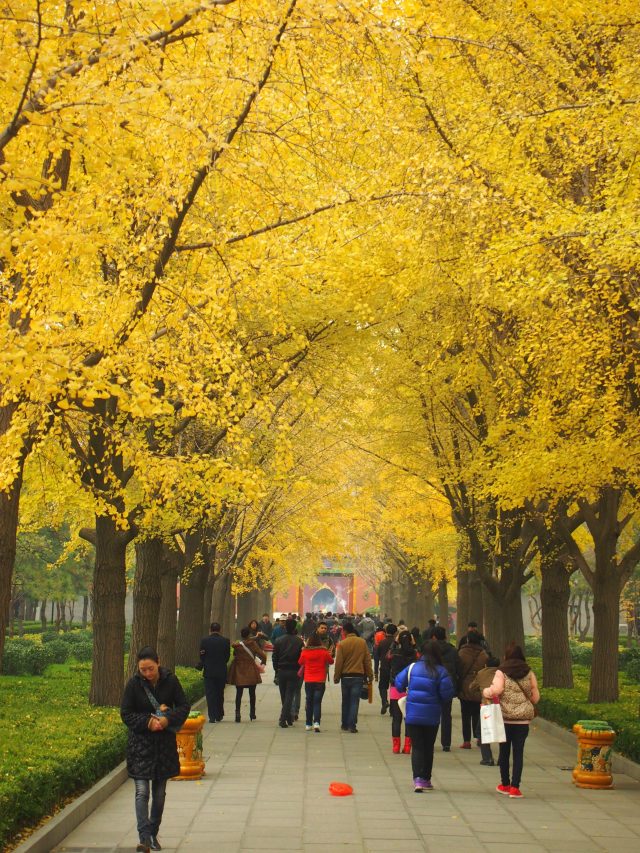 This was probably my favourite part of the palace – the entrance! Loved the vivid yellow of the leaves in contrast to the dull red walls.

It was very cold and very crowded. The Lama Temple is not just a tourist attraction but a working temple with a rather checkered past. With the intense cold, a constant stream of incense, the smoke and the gilt statues, I just got bored really quickly. Could not wait to leave.

It was also here that I encountered again, the Chinese way of using the toilet – to put it nicely. Nothing wrong with the toilet itself – the plumbing works fine and I’m also okay with the squat pans. But why on earth do they not want to use the perfectly workable doors?

I don’t think I am particularly squeamish and certainly after my first brushes with Chinese toilet habits in my first trip to China, the sight of someone defecating openly should no longer faze me, yet I still do a double-take when I see these. I just wonder what these people have against using the door?

As with most temples there is usually a ritual or two that can liven up a temple visit. Depending on what you call it, superstition or religious ritual, it is believed that you could gain some form of merit/good fortune if you can toss a coin into the openings of this incense burner or if the coin you toss stays somewhere ON the burner (above). Needless to say, the children had a field day gleefully throwing coins at this incense burner in the middle of the courtyard.

To me it is really the superstitious equivalent of the one-armed bandit or a rigged carnival game stall and all too soon, the coins ran out. Enterprising children however, did all they could to sweep the change on the ground towards them – good for the another couple of rounds!

Afternoon saw us in the broad avenue of Qianmendajie where being typical Singaporeans drawn by a queue, particular queues at restaurants and eating places, we promptly joined this one when we realised people were queuing for one of Beijing’s heritage foods – the shaomai dumplings of Du Yi Chu.

The plaque on the wall proudly proclaims its history. Founded in 1752, the humble restaurant played unsuspecting host to the Emperor Qian Long in disguise. Fond of traveling incognito, the emperor had found himself outside the palace walls and hungry on the eve of the Lunar New Year. With shops all closed for the New Year celebrations, only this dumpling shop remained open. The emperor loved the food and sent an eunuch back to the shop the next day with a golden plate, inscribed with his handwriting naming this shop which had had no name. I guess the  golden plate must have been the equivalent of today’s Michelin stars because the restaurant prospered after word spread about the emperor’s patronage. 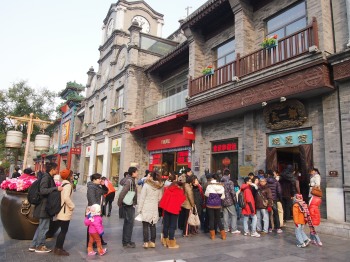 When in Beijing, do as the Beijingers do. So here we are today, standing in line to taste these dumplings.

The line moved quickly and we were soon shown to our table on the second floor.

Dumplings seem to be the star here. But for us, we fell in love with a dish of stir-fried coagulated duck’s blood with some greens and preferred it to the dumplings which we found to be quite dry. 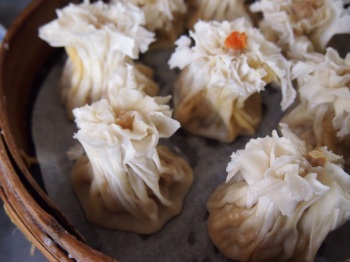 The rest of the late afternoon was spent strolling from Dazhalan to the bookstores of Liulichang East and West. I liked this walk a lot because it gave us a glimpse into the narrow alleyways in a typical Beijing neighbourhood. Dazhalan was quite commercial and touristy with the street well paved and all its edges nicely straightened for tourists. But move a little further on and you’ll find yourself in a warren of lanes that connect to Liulichang.

For us, it was a search for a public toilet that led us to a narrow alley lined with backdoors, laundry drying overhead, bicycles parked against the walls. The lane opened into a tiny clearing which had the community notice board and the public toilet sharing public space.

No news on the community notice board.

The public toilet looked newly constructed but it was already reeking with usual toilet pong. Inside, there were no doors. Good thinking. Why waste money on doors which no one uses? Instead, the row of squat pans were separated by waist-high dividers. Just stand up and you could see your neighbour going about his business. I suppose this is already an improvement because these were individual squat pans which could be flushed. In the past, you just did the job over a common trough and everything goes downstream.

I was fine with the toilet but KH emerged from the men’s room looking a bit shell-shocked from the sight of a man in a suit crapping right before his eyes the minute he walked in. He said that even though I’d warned him and told him about what I’d seen in earlier trips, even though he’d been to China on business before, this was the first he had seen of Chinese communal crapping habits. He had not expected to see this in Beijing, given that Beijing was such a modern city already. I was happy though – that meant we were right smack in local territory. You would not find toilets like this in Wangfujing, that’s for sure!

As we wandered deeper, we came across a ‘market’ where local residents were buying produce home, probably for dinner that night.

Noodles freshly hand-made on the premises for sale

The roads here were dusty and looked like they were in the middle of some construction and paving. A dog-legged turn later and we were back in tourist-land, now in the gentrified antique shops, art galleries and bookstores of Liulichang.

Shadow puppets seemed to be a popular souvenir on sale here at Liulichang. We didn’t buy any here but at the end of the trip, we bought a delicately beautiful hand-cut and coloured shadow puppet of the Monkey King dressed in opera garb. 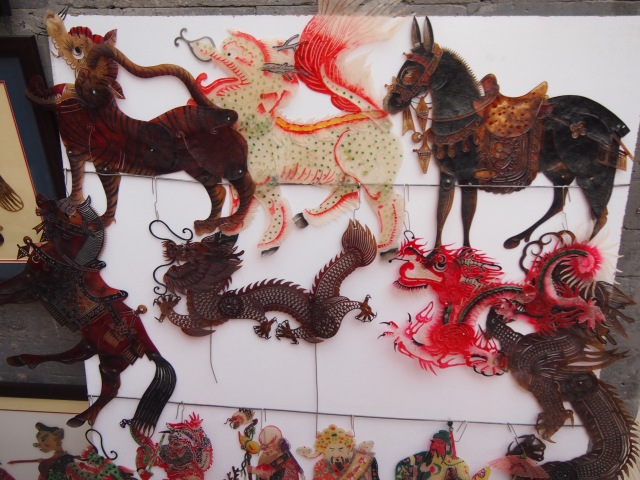 Stepping in is like stepping back in time. Books in Chinese, stationery, souvenirs, posters, CDs, cassette tapes, music scores etc were haphazardly arranged, crammed into a space that looked like it had not been touched for 40 years. A far cry from the slickly set-up bookstores we have at home, this looked like a familiar remnant of the old Chinese bookstore I used to frequent as a child. I was delighted to find the same heavy wood-framed glass showcases,  the same musty smell of too many decaying books, the non-arrangement and classification of items on sale. In this sort of space, you never knew what you could find. It was made for browsing and for surprises and I loved it! I could spend hours in here but the children were waiting patiently outside.

On the way back to the subway, we came across a ‘car’ which had been wheel-clamped, probably because it had a crisis of identity and had parked in a bicycle lot. I read that modifying cars or bicycles is not uncommon in China. It would not be unusual to find a strange contraption that was neither car nor bike or maybe a little of both! As long as it ran well, that was good enough! So is this a car? Or a bike? You be the judge:

2 Responses to Walking through Qianmen and Liulichang