Evening at the Summer Palace 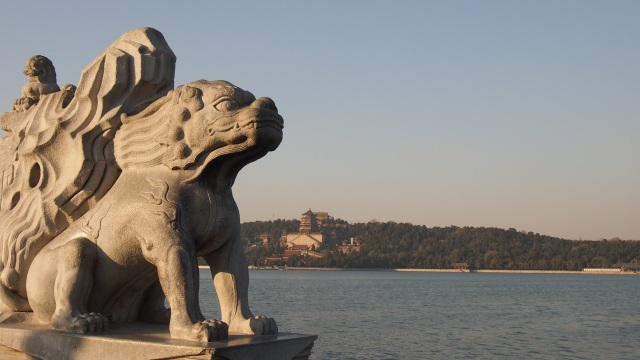 The Summer Palace or Yiheyuan makes a nice evening’s walk. The place is huge and really deserves one full afternoon at least. But by the time we had lunch and then grappled with some afternoon traffic, we arrived only around 3pm, which in early winter is already near sunset. Loved the light but pity we didn’t have time to really explore Longevity Hill or the rest of the buildings which were already closing. Bear in mind that the grounds are sprawling and where we entered at the Minor Gate, it was easily a 4km walk from there to the Marble Boat and back.

The elegant 17-Arch bridge is linked to a small island but we didn’t have time to explore this further. Instead KH was bent on making the long walk to the famous Marble Boat. The Long Corridor itself is already 800m. And that was already about a km from the Minor Gate. Given the fact that the kids had trudged up and down the Great Wall that morning, they never grumbled at the distance, they just got on with it. The walk traced the northern curve of Kunming Lake. Most of the buildings and gardens at the rim of the lake were already closed or closing. So not much to say in terms of stand-out sights but we just enjoyed the walk as a family, not often in our busy everyday lives that we can just go for a long walk and talk along the way. Here’s some of what we saw:

Wenchang Tower, the largest of the six gates in the Summer Palace

Beneath shadowed pines, the shriveled beds of lotus wait to bloom again in summer. 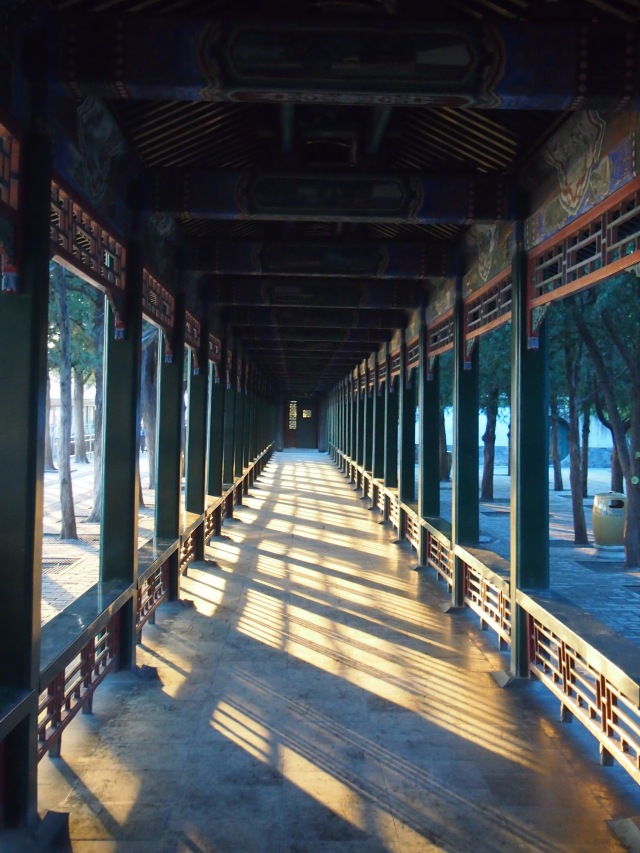 A surprisingly quiet stretch of the Long Corridor.

And here we finally are – at the marble boat. Which apparently isn’t even made of marble. Just ordinary wood. It’s looking a little forlorn here and quite worse for wear. Tacky too. Guess there’s no accounting for taste – empress dowager or not!

So we walked all the way here and then we had to walk all the way back. The crowds of tourists were already thinning out as the evening closed in. Something strange happened here at the marble boat. An old man in a large shabby overcoat approached Caitlin and asked if he could take a picture of her. She said no, but then he asked KH and KH said yes so he snapped a couple of pictures, close-up of her face, thanked us and left. My first paranoid thought was: what was that for? Possible paedophile? KH thought it was harmless but I just felt uncomfortable about it.

By the time we made it back to the Minor Gate where Johnny was waiting to pick us up, it was already dark which meant we ended up in the thick of peak hour traffic snarls in Beijing’s outer ring roads. It took us more than an hour to get back to the hotel and we were thoroughly exhausted by then. With a whole morning spent climbing up and down the Great Wall and then the evening literally walking 4km in the Summer Palace grounds, we were all tired. But what a great day we had! 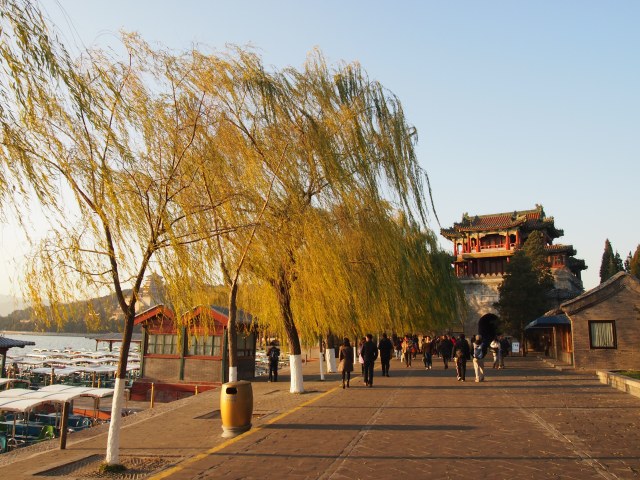 This entry was posted in China, Travel with kids and tagged Beijing, marble boat, Summer Palace. Bookmark the permalink.