In Beijing, secret places undiscovered by crowds still exist. We discovered one right next to the Forbidden City. While the crowds have their photo moment thronging the main entrance of the great  gate of Tiananmen, we took the road that is much quieter and far less traveled to the left of the big gate facing the square to visit Beijing’s last remaining imperial ancestry worship temple – Tai Miao. For most of the morning we enjoyed having all to ourselves, the large and deserted sacred site of imperial ancestor worship, not so long ago one of Beijing’s most important sites of worship.

It was so quiet and sleepy that even the ticket seller at the booth seemed surprised to see us. Entry was not expensive – about RMB2 per person. Yet in contrast to the crowd just beyond the red walls, this was peace and quiet that is rare in Beijing and for a five-star sight that flies so much under the tourist radar too!

While once a greatly-revered site of royal ancestral worship, Tai Miao languished for years as the drably titled “Working People’s Cultural Palace”, a shadow of its former self. Thankfully though, unlike many other Ming and Qing era buildings and relics, this was left largely alone and not destroyed in the days of the Cultural Revolution. It stands today, largely silent and empty except for the occasional tourists like us and the wedding couples who use its grand backdrop for many a wedding portrait. While not exactly falling into disrepair, the flaking paint and tufts of yellow straw on the roofs do give an impression of an old disheveled and unshaven, mildly disoriented grandpa a bit out of step with time.

The pines, some of them hundreds of years old, soften the angular vista of buildings with some green foliage, but this is only in the forecourt. Once inside, there are few trees and plants. To enter the complex, one first crosses a slim moat sliced by ornate marble bridges. Only the emperor could take the middle bridge. Those at the sides were reserved for minor royalty. Standing before the moat is the Halberd Gate, built in 1420 and still looking like it did 600 years ago.

Cross over and pass through the Halberd Gate and the view opens to a wide expanse of space. Much like how the first view of the Forbidden Palace grips you with the huge space lending it hauteur and grandeur, the forecourt of Tai Miao takes your breath away at the unexpected realisation that it is really a scaled down twin of the Forbidden City next door.

Perched on three tiers, the Hall of Ancestral Worship is just one of the four rare buildings left in Beijing that is elevated in this way, an honour that suggests the sacredness of its purpose and design, restricted for use by the Son of Heaven. The red-paneled buildings are all largely empty with the wooden ancestral tablets pilfered or destroyed during the Cultural Revolution. But the architecture of the place still elicits the same sense of awe.

What struck me were the wedding couples out to take their wedding pictures in all their finery! There were at least three couples there that morning and what a striking picture they made with the brides in dramatic fire-cracker red gowns set to glorious contrast against the yellow roofs and blue skies.

Couldn’t get enough of these lovely bridal shots so here’s one more for the road (below):

The whole complex was ours to just roam in and the kids took advantage of that. I don’t think the austere temple ever resounded this much to the shrieks and laughter of children and their pratfalls. We also loved the marble lions and their toothy grins:

The huge empty spaces made it tempting for lil Red to run free:

But the best part is, immediately as you exit the grounds of Tai Miao, you’re right there already at the long quiet boulevard flanking the canal that rings the Forbidden City. Follow the red walls of Tai Miao left and you’ll end up at the South Gate of the Palace Museum where it’s easy to buy your ticket and re-join the crowds at the Forbidden City. 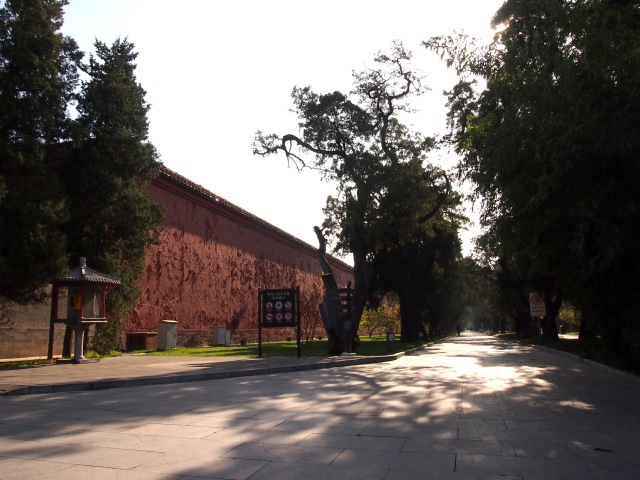