Going on the midnight train… to Datong! 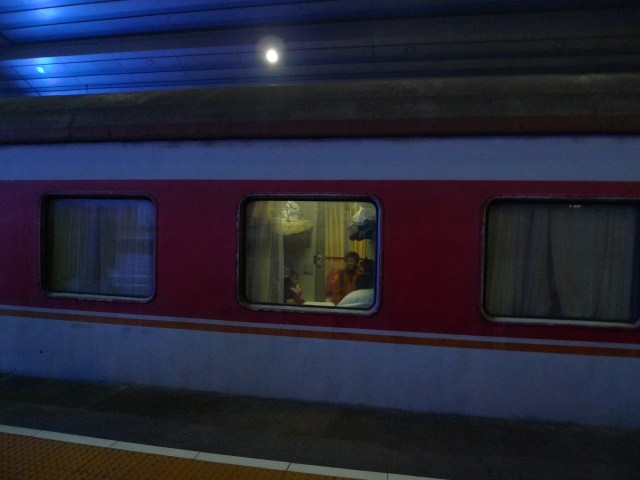 Not Ms Knight and the Pips. And certainly going nowhere near Georgia. But we were getting on that midnight train from Beijing to Datong. Traveling via night trains is always a good way to save some time and money. I’m used to this when I travel in Europe but have not done anything like this in China. This being my first trip on my own in China, it would also be my first train ride anywhere in that country. I was curious about what train travel in China was like. The kids were also new to night trains and I thought they would find this a cool experience. Well let’s just say this was a learning experience for all… 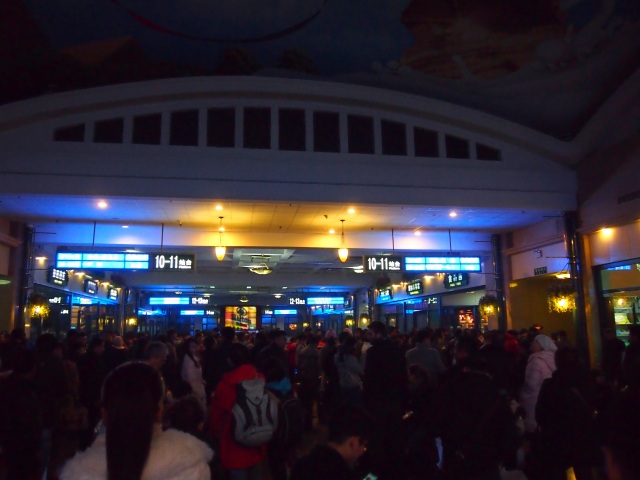 Ladies and gentlemen, welcome to platform 10 – 11 Beijing Railway Station! Yes it’s as chaotic as it looks!

We had to catch the 11.42pm train to Datong from Beijing Railway Station. Earlier that day we wandered around Tai Miao and the Forbidden City, then hopped over to Sanlitun for dinner, window-shopping and desserts before returning to the hotel to collect our bags. We wanted to stretch the time as far as possible before we had to leave for Beijing Railway Station. I was reluctant to leave the haven of the Park Plaza for the unknown but finally by 10pm we could not postpone this further. So we grabbed two cabs for the trip down.

Although there are subway connections to Beijing Railway Station, I didn’t want the hassle of lugging bags and a big group so we took cabs. In the end, the cabs had to drop us across the road from the station. We tried the subway’s underpass but it was sealed off so we trudged back up. The only way across was to lug our bags up over an overhead bridge with no escalators or lifts.

At Beijing Railway Station, garishly lit in neon as all Chinese railway stations seem to be, we couldn’t just walk into the station. We had to pass through barricades to checkpoint booths to show our tickets and passports before we were allowed entry. At the main doors, our bags were scanned, just like in the airport. I was glad we were early, given the stringent security checks.

Once inside and with bags scanned, an electronic board showed us which platform we had to wait at. I had read that soft sleeper passengers had to wait in a designated waiting room, but this was not the case here in Beijing Railway Station.

Everybody just stood around waiting in the general hallway:

We struck up a conversation with a nice middle-aged lady heading home to Datong to visit her son. When the announcements were made that indicated we could board the train. there was a surge to two gates. Lots of pushing and shoving but the wise lady just advised us to wait. No point rushing, plenty of time, she said.

It was very cold that night at 0°C and the platform was frigid. We were not surprised to see that it was quite a scruffy old train. Our tickets were for soft sleepers which meant we had two compartments side by side. The slim passageway was crammed with people, some of whom were just standing around, others had pulled down a retractable seat and made themselves at home. I was surprised to see the crowd.

Each compartment had four bunks so three children came with me while KH took Owain with him. In his compartment, he was surprised to see someone already lying on his designated bunk. When he checked the guy’s ticket, it was clear that the guy had a ticket for a seat in another carriage, not a bunk. So he sheepishly made his way out.

As the train pulled out, the corridor in front of the cabins cleared as everyone made their way back to their own seats. That’s when we realised that those people were sitting hopefully in front of the cabins watching to see which ones were not in use, so that they could slip in and occupy the unused bunks – until the conductor comes to clear them out. Which also explains the less-than-clean state of the train and the bunks. 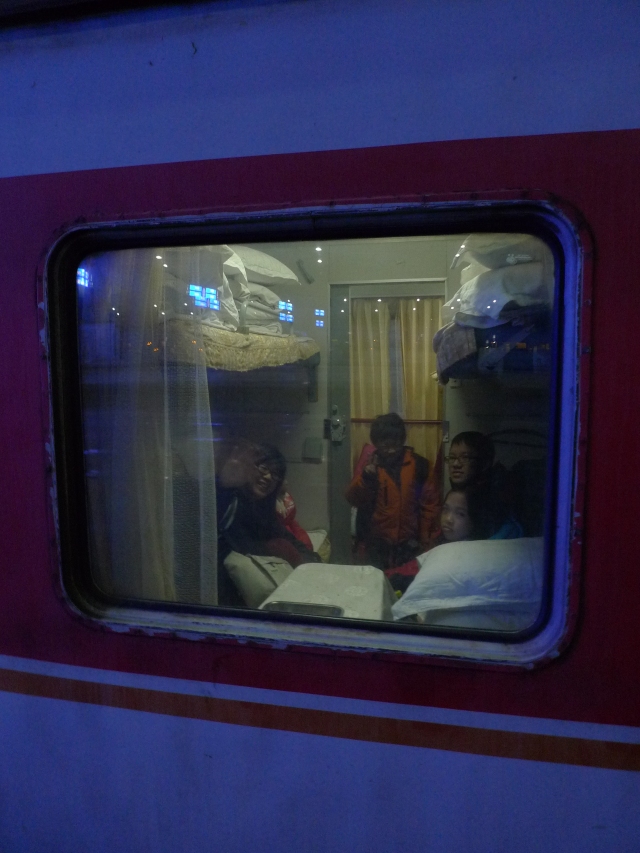 I’m not super-particular on cleanliness and have looked the other way on more than one occasion but the whole feel of the carriage, cabins, bunks just gave me an icky feel. Cigarette butts, stale water, stained trimmings and the used feel of the sheets meant that I felt squicky enough to sleep on top of my winter jacket which I spread out on the bed. Having said that though, I thought Chinese sleepers do provide more comfort than European trains. We had at least 2 pillows per bunk and a generously thick duvet each. Compare this with Italy – one pillow, no blanket and one disposable cup of water!

The kids were cool with it and thought it was fun to sleep on a train. Cleanliness aside it was actually pretty safe because the conductor would come and exchange our tickets for a token. After which you could lock the door and snooze until it was time to go. And it’s also highly unlikely you’d miss your stop because the conductor comes round half an hour before your stop to wake you up and retrieve his token.

We arrived in Datong station around 6am in the morning when it was still dark. There was snow on the tracks which would tell you how cold it was as we stumbled off the train sleepily.