The mouth to the beautiful Kurobe Gorge is not easy to get to. It took us two changes of trains and the better part of a day’s journey to get here from Minakami Onsen.

Most visitors do not stay long. This small town is known as a transit point to the real attraction – the dinky little train ride that leads you deep into the steep valleys of the Northern Japan Alps that is the untouched and serenely beautiful Kurobe Gorge. For me, Unazuki Onsen left a different impression. I will remember it for entirely different reasons – for the one of the best kaiseki dining experiences I’ve had in Japan featuring ika hotaku (firefly squid) and the surreal (yes, creepy) experience I had in the hotel onsen. 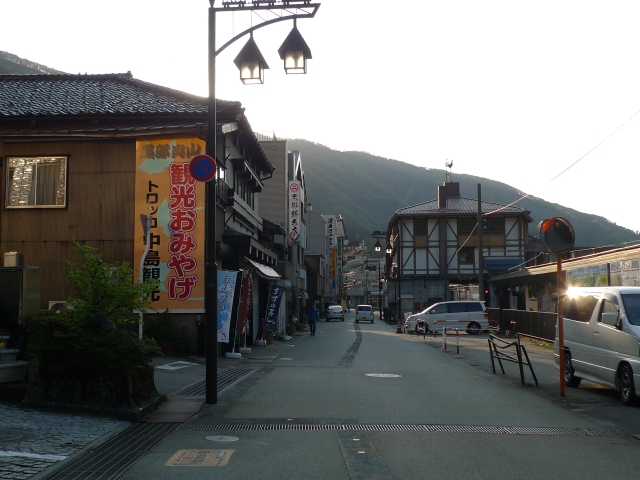 By the time we arrived in the town, it was already late in the evening. What first struck me was the lack of people. Where was everybody? This being a resort town I had expected it to be more crowded but it was conspicuously empty.

The Unazuki Onsen train station run by the Toyama Chiho railway line is the terminus station and from there, just about a few hundred metres away is the Unazuki railway station where trains start their rides into the gorge.

We had planned to take the ride the next day but I decided to get tickets and book a slot ahead of time. The season had just opened and I had read that crowds and long queues were not unusual so I didn’t want to take my chances.

Unfortunately fate threw a spanner into my plans because yes, while the tickets were available, the trains did not go all the way to the last and most scenic stop at Keyakidaira. Apparently there was still snow that deep inside and that last stop was closed for now. It was scheduled to open only a week later but we would be long gone from Japan by then.  Keyakidaira was where we planned to hike a bit deeper along the river banks into the famous gorge. This would have meant a much longer time spent in the gorge, which would warrant another night’s stay in Unazuki Onsen.

But since it was not to be, there didn’t seem to be much point staying on. Unazuki Onsen, as we quickly realised, was small enough to walk through in half an hour. Plus it was so quiet that the whole place felt like a ghost town. So we decided to just stay one night, see the gorge in the morning and then take the train out to Kanazawa in the afternoon. The hotel was kind and flexible enough to allow us to make the change even though I had already prepaid.

The town had only two main shopping streets parallel to each other. Most shops were closed and the place looked deserted. Here and there are tiny charming bronze statues (below). It was fun to  go around trying to spot these because sometimes they were placed so casually you’d miss them if you didn’t look hard.

The hotel we stayed in (I’m not naming it for obvious reasons you’ll see later) was clean and comfortable but had the musty dated air that seemed stuck in the 80s. There seemed to be few guests. We noted a group of elderly men and women but that was about it. In fact the hotel had so few guests that dinner was arranged in another restaurant away from the hotel.

The restaurant, about 200m away from the hotel, served up one of the best dinners I’ve had in Japan. I did not expect this. I was prepared for a simple, no frills dinner given what I saw of the town. But no, we were served a solid kaiseki that was centred on fresh seafood, in generous proportions. There were no surprises – stewed vegetables, pickles, sashimi, tempura and so on. But it was all very solidly well done. The sashimi came in a beautiful arrangement with chunks of ika, hamachi and luscious king prawns  nestled on a bed of ice (below). 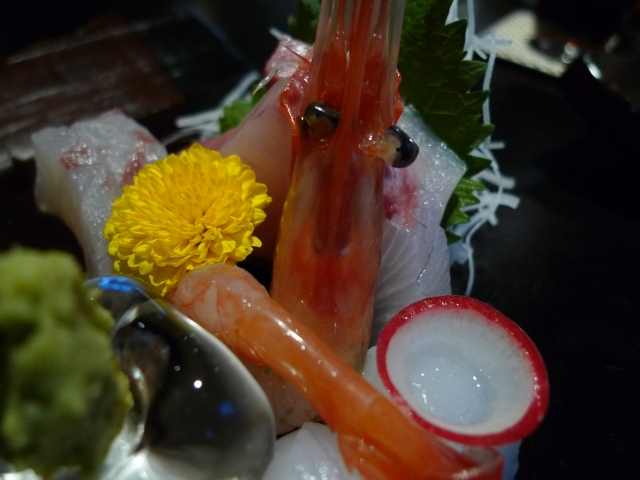 But the best and most unforgettable part of the meal were the tiny, slick morsels of firefly squid or ika hotaku, that we cooked ourselves. Those remained meltingly soft no matter how long you simmered them in the light broth. But the grand surprise came when you popped them into your mouth and let the molten liquid centre explode inside in a huge rush of umami with that sweet and salty kick that could only come from freshly-caught seafood.

It’s the sort of texture and flavour that people go orgasmic over. I’m sorry, that’s just how I felt. No other way to describe that perfect blend of taste and texture and my instinctive response. It was love at first chomp with those tiny babies. Ika hotaku is a seasonal delicacy harvested and eaten in spring and the bulk of them come from this part of the coast of Japan. Guess I was in the right place at the right time!

Apparently they even wash up in the thousands on the beaches on the coast. Like fireflies, they really do emit a surreal bluish glow in the water. I wish I  could see them – and then scoop them up from the water and just eat them! KH shrugs every time I rave about this. He didn’t like it but that was great for me because I just took his share!

The weird experiences that both KH and I had started midway through dinner.

He was seated across from me, looking out into the street. Suddenly he stood up and stared intently out the window. He told me he wasn’t sure what it was that he saw. He saw a white animal that did not look like a dog, was too big to be a cat, trot down a staircase in the building diagonally across the road. He thought it looked more like a fox but how likely was this? By the time he had stood up to take a closer look, the animal had vanished round the corner. No one else was on the street.

So I laughed and told him to be careful, maybe it was a white fox spirit. East Asian folklore was full of these animal spirits which were demons in  the guise of beautiful women.

We finished our meal and left the restaurant. The night was chilly and KH was still puzzling over what he had seen. Back in the hotel, I decided to soak in the hotel’s indoor baths on the topmost floor. It was past 10pm by then. KH decided to pass so I went alone.

So this hotel is old. I know there are only a handful of other guests apart from us. The corridors are empty, the lifts are empty and overall it feels creepy to be the only one out there. In fact the lights in the lobby were already out save for a few lit corners.

As usual, the baths are segregated into men’s and women’s baths. The first hint of something unusual was at the red-curtained entry to the women’s baths. A pair of women’s black high heels stood outside. I found this unusual because most of the time, guests would have changed into their yukatas and put on the house slippers before heading for the onsen, as I did. My initial reaction was just to shrug it off and feel glad for some company since I was already feeling uncomfortable.

Inside, I disrobed but found that no other baskets, apart from mine, were in use. So where were my fellow bather’s clothes? By now the feeling of dread was growing. Any sensible person would have just turned around and gone back. But I have a stubborn streak and feeling very grimy after a long day of traveling, I was determined to have my bath. Since my room came without bath facilities, this was the only place I could have a good scrub.

So I took a deep breath, tried to ignore the prickly feeling of dread crawling at the back of my neck and opened the sliding glass doors which led to the steamy bath and shower area.  In one corner, seated on a stool, back towards me, was a woman.

Let me say that she was the most beautiful specimen of womanhood I have ever seen. I’ve been to so many onsen baths, seen so many women of different shapes and sizes and this woman, for the first time, took my breath away. She looked young and slim, could not have been more than 30. She had long jet-black hair that fell to her waist which was small and high, proportions I would die for (okay, wrong choice of words) and the fairest, milkiest skin I’ve ever seen. She was totally white. I’m pretty fair myself but next to her I look tanned! She was a very beautiful woman.

I took a shower space as far away as I could get which isn’t saying much given the limited space. I watched her out of the corner of my eye. I wasn’t trying to be a voyeur but something about the whole situation just didn’t feel right and I didn’t want any surprises. Meanwhile I just scrubbed myself as fast as I could.

The woman washed and combed her long hair leisurely several times and then pinned it up before she went into the bath. She stayed in the pool, back towards me, for about two minutes before she came back up and starting washing herself and combing her hair all over again. By this time, I was really feeling awful and could not wait to leave. I exited the bath area quickly, scantly drying myself and having one more quick glance around the place in case I missed seeing her things. I confirmed there was nothing there – where were my fellow bather’s bath paraphernalia and clothes?

The feeling of dread and fear followed me all the way as I fled down the deserted corridor, punched the lift button hysterically willing it to reach me fast and hoping whatever it was I saw did not follow me, or worse, appear in the empty lift. You can tell my imagination was really working overtime. I spilled all this out to KH and he didn’t know whether to believe me or not but given the atmosphere of the town, the hotel, what he saw at dinner, we were more inclined to trust that this twilight zone encounter was real. Even now, months later, I do wonder if what I saw was a real live human or something supernatural.

I think these things, spirits or ghosts, do exist and sometimes you bump into stuff you’d really prefer not to. I’ve had my share of similar experiences while traveling in Australia – Sydney and Hobart to be precise, and while they are not pleasant, I take them as part and parcel of the experience of the place. After all, great travel stories come from icky encounters like these.

So if you ever go to Unazuki Onsen, keep an open mind. You never know what you’ll chance upon.

This entry was posted in Japan and tagged Kurobe Gorge, onsen, Unazuki Onsen. Bookmark the permalink.