All aboard for Kurobe gorge! 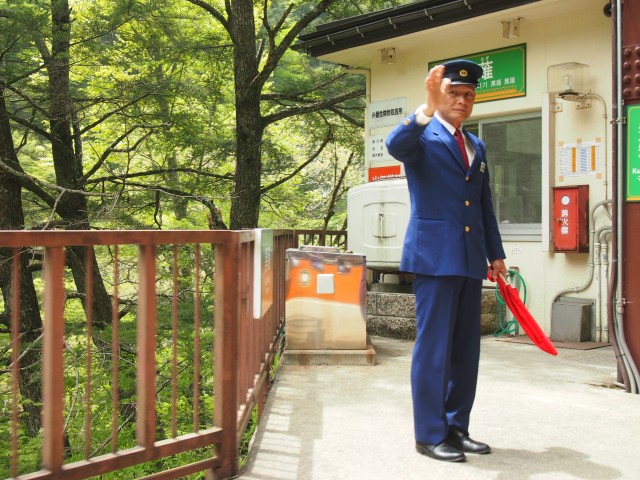 Along the Kurobe gorge, there are only four key stations along the route, three of which were open at the time of my visit in early May. But the view as the little train chugged along deep into the valley is timelessly beautiful. Fresh green leaves of spring and early summer turns the landscape verdantly lush. Yet at some points, snow still dots the upper reaches of the mountains high above. Here and there, on the slopes, you could still see wild sakura with their white blossoms standing out against the green. Far below runs a rocky stream bed that at turns widens and deepens into slim lakes and rivers in shades of  turquoise and teal before water disappears and reveals beds of bleached pale grey stones.

It’s probably well worth hiking certain sectors or even spending the night at rustic and remote onsen inns in the gorge which can be accessed by walking from some of the station stops. But we were short on time, having decided to move on to Kanazawa during the second half of the day so we stuck to a train ride to Kanetsuri station and then back to Unazuki Onsen. 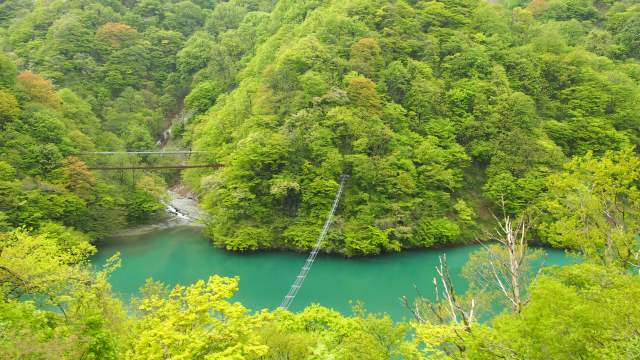 We bought one-way tickets for each sector – from Unazuki Onsen to Kuronagi and from there to Kanetsuri. Once at Kanetsuri, we bought tickets for Unazuki. The train offers different classes of seats. You could pay a supplement for the enclosed second and first class carriages but we were happy with the standard cabins which were open carriages with cushioned backless benches. It was a bit chilly at times especially when the train zipped through the tunnels but we preferred that to shooting our pictures through a window.

A little after Unazuki Onsen, we saw this bridge (above). The suspension bridge in the foreground is for monkeys to cross. Just a little bit further and from high above we saw this: 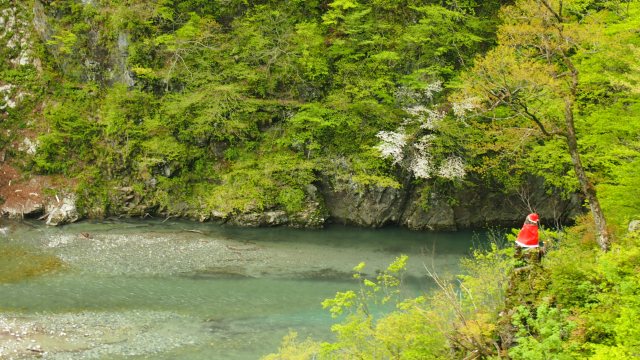 This part of the valley is called Hotokeishi. The rock formation resembled a buddha hence the adoption of the typical Jizo style of red beanie and bib. In the past, the only way into the valley was on foot. Travelers would stop here to offer prayers for a safe journey into the mountains.

At Kuronagi stop, we were the only ones who got off, eliciting stares from everyone else on board. We did think initially of hiking in to the onsen about 20min away but when we consulted the time table, we realised that we would have to miss the next train and the train after would take some time later. All in all, we decided against it. Still, we had some time to kill. Tried to strike up a conversation with the station master but realised that although he could not speak any English at all, he was strangely enough, fluent in Italian! So I dug up my very rusty and rudimentary Italian combined with sign language to communicate. That was how we realised that it would not be feasible to walk if we wanted to catch the next train in.

The light blue Atobiki bridge crosses the deepest and narrowest part of the Kurobe gorge. You can’t see it from here but it’s a steep gut-clenching look down to the bottom. 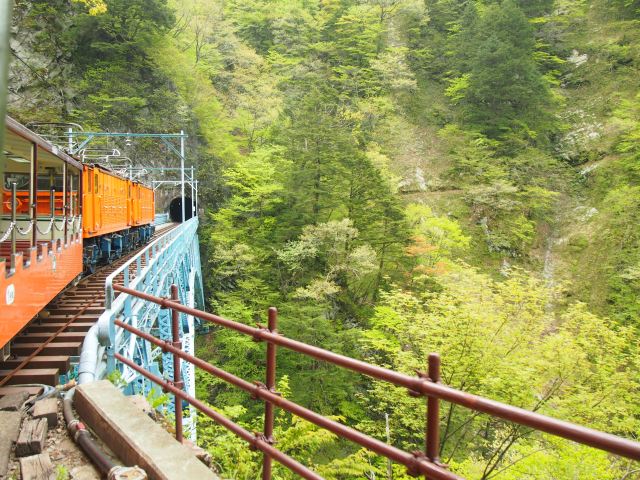 At our next stop at Kanetsuri, we did walk a little further in to see the permanent ‘mini glacier’, the Mannenyuki, loosely translated to mean “10,000-year snow”. It’s actually a pile of accumulated snow from avalanches starting high above. After some time, there’s so much snow piled on that it doesn’t melt and becomes pretty much a permanent fixture all year round. 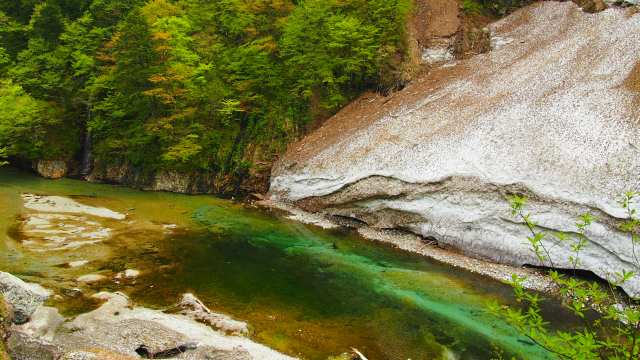 A little deeper in, following the trail of Japanese visitors, down the side of the hill to the rocky river banks, you’ll find a natural rotemburo onsen. I guess you could actually skinny-dip if you dared but most people just removed their shoes and soaked their legs and feet.

Back on the train, we passed more pretty river and mountain scenery: 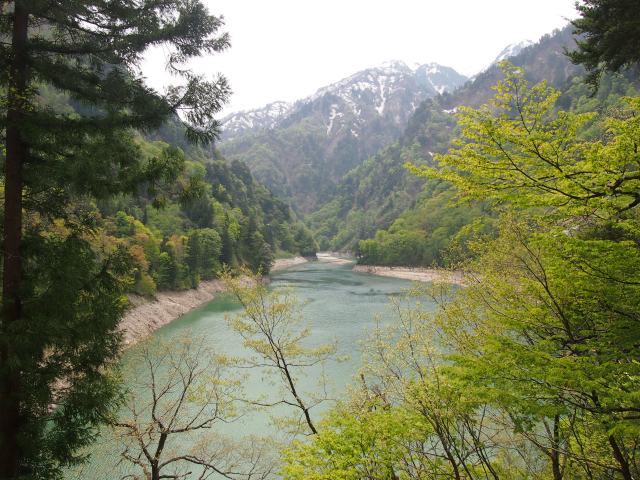 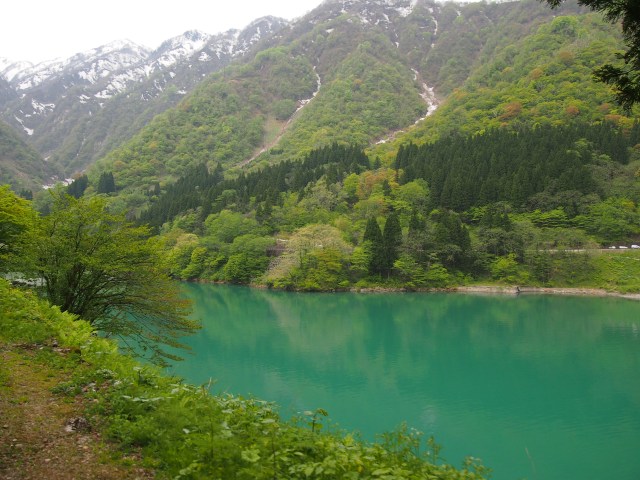 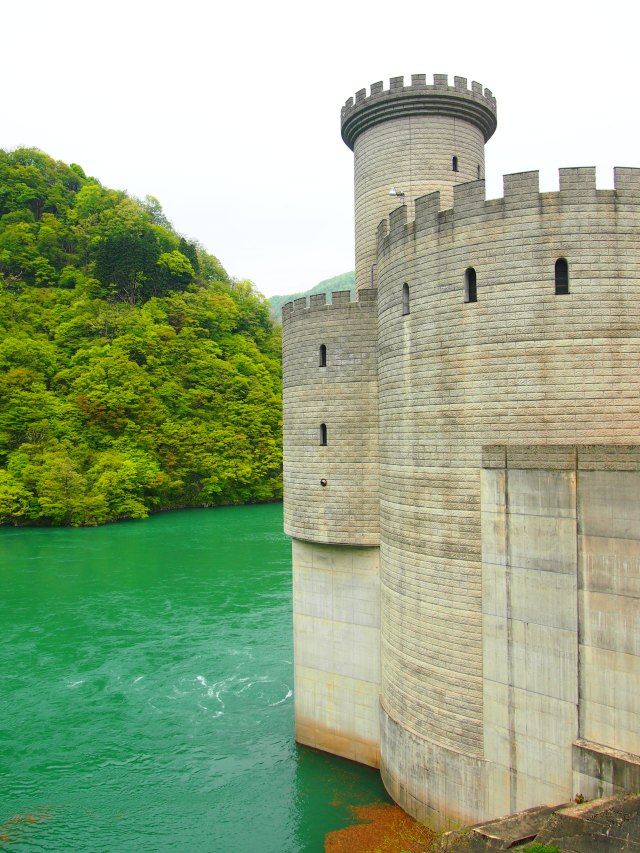 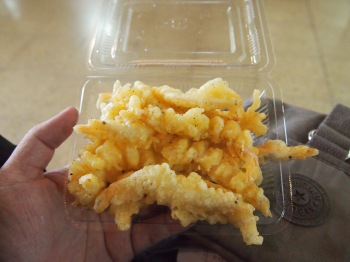 We ended our Kurobe visit by gorging on a snack of deep-fried ‘glass shrimp’. The batter was light tempura style batter and the seasoning was simple – salt and pepper. The shrimp are freshly dipped in batter and fried on the spot. It was not cheap at 400yen for a small pack and 700yen for large box. But boy, the little babies were so lip-smacking addictively good, I finished the first small box in 10 minutes flat, sprinted back to the little shop to get a larger box which we intended to eat on the train ride but which we greedily finished in another 10min while waiting for our train to come. Yep, it was that good.

Our next stop – Kanazawa’s geisha district.

This entry was posted in Japan and tagged Kurobe Gorge, trains, Unazuki Onsen. Bookmark the permalink.

1 Response to All aboard for Kurobe gorge!