These are the famous snow walls in the snow corridor near Murodo. This road is snowed over every year from November to April. In April, the road is cleared with great fanfare, with the event broadcast on national television! The route is usually cleared and ready for passage by mid April. When we were here in early May, the walls were about 18m tall, towering over the buses that trundle the route between Murodo and Bijodaira.

Walking the 500m-long snow corridor, or Yuki no Otani was just one of the highlights in a day filled with jaw-dropping gorgeous mountain scenery, this time cutting across and under the Tateyama massif and down towards Nagano.

After breakfast, we hauled the backpacks and luggage to the front desk to forward these to the last stop of the Kurobe Alpine Route at Shinano Omachi. This cost 1,700yen per bag including tax. But it was worth it because I cannot imagine the hassle of lugging bags all over the mountains. Now hands-free, we walked out to the snowed-under bus-stop (above) to take the next bus to Murodo.

Murodo was very crowded, flooded with tour groups. We were so glad we stayed at Midagahara where it was quieter. At one point, when I was busy stamping my book with the route’s different commemorative stamps, I heard a familiar accent. Yep, Singaporeans are so well-traveled these days that you run into them even atop Japan’s highest points. This family was part of a packaged tour and we stopped to chat for a bit before going separate ways.

The snow corridor was amazing to see. There were signs that told us how high, how thick the walls were. At 18m tall, the walls were the equivalent height of a five-storey building. The wall also charted the complete story of last season’s snowfall. As the snow falls and ices over, layers are formed, slowly building up over time to tower over us all.

Depending on the lines of ice and the colour of each layer, you could tell if it was a sunny day, a wet day or a snowy day when it formed. For example, a hard layer of ice shows that it was warm and rainy that day when the melted snow soaked into the layer of snow beneath before freezing again. There’s even a date chart which charts each day’s and each layer’s descriptor up to the current date so you can see the progress of the snowfall.

Above Murodo, a line of hikers and skiers tramped upwards, like tiny black ants against the white. We didn’t go that far, just to the observation deck and a little beyond, just enough to marvel at the sea of clouds blending into the snow hills.

From Murodo, we started the descent. The next leg tunnels through the mountain via electric trolley buses to bring us to Daikanbo on the other side of the mountain. Nothing really charming about this part but tech geeks will marvel at the engineering feat it was to make this possible. The use of electric buses is also a plus point for sustainable eco-friendly tourism, also helpful so that we all do not asphyxiate on carbon monoxide in the enclosed spaces during the journey. 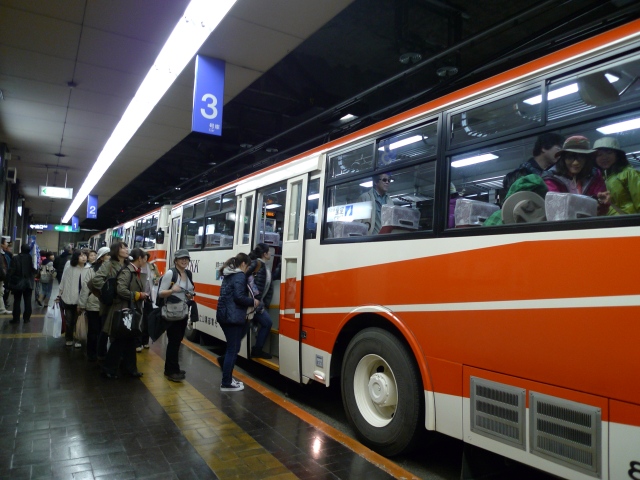 At Daikanbo, we spent some time on the observation decks just soaking in the views. This was the start of Japan’s longest (one more accolade for the route!) single pylon ropeway (or cable car where I come from!!). The tiered decks were full of people oohing and ahhing over the views and you can see why (below):

The opaquely jade green sliver of a lake and the zig-zag roads serving the Kurobe Dam lie far below. This is also one of three ‘snow corridors’ in Japan where there is snow even in summer.

I did not expect to find large crowds on the Kurobe Alpine Route. Yes, I thought there would be travelers, but it did not occur to me that there would be an inundation of tour groups. From Murodo to Daikanbo to the Kurobe Dam, there were large crowds – Japanese, Chinese, Koreans, Singaporeans etc. The Japanese being ever so polite, do not jostle or push. But the Chinese tour groups, oh dear, are loud and pushy and you can spot them a mile off – or hear them actually, before you see them. Unfortunately, the downside of being in a crowd means you are likely to get squished – in the cabin of the cable car, in the long crush of people moving as one body towards entrances and exits. Thankfully there are spaces to ‘break away’ eg on Kurobe Dam where the space allows the crowd to spread and thin out. I guess the only way to steer clear of the crowds is to start either very late or very early.

I took this shot of Daikanbo in the ropeway cabin on the way down to Kurobedaira. It’s got a bit of treatment but from this point, doesn’t the tiny portal of the building resemble something out of a Bond movie villain’s hideaway? 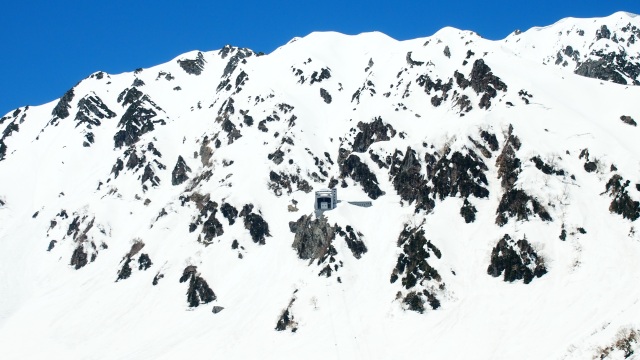 From Daikanbo, the ropeway took us down to the Kurobedaira where a ‘cable car’ took us down to Kurobe Dam. From there, we had to walk across the dam, marveling both at the scale of the dam and the views of mountain and valleys that spread both ways. In the summer boat rides are operated on the lake and in June, you can witness the huge gush of water being released. But at this point, the water levels are still low and the landscape looks a bit dry and barren but still as majestic.

If you stand in the middle of the dam and look down, it’s a steep 186m straight down. Not for those who suffer from vertigo! Looking further downstream is the Kurobe Gorge and Unazuki Onsen where we were just a few days ago.

The dam has an interesting display on the construction and the history of the dam, including a tribute to the 171 who died in the process of building it. A couple of cafes and souvenir shops also sell light food and drinks. But the place was packed with people, so we gave it a miss and moved on. From this point, we were almost at the end of the Alpine Route. A trolley bus took us from the dam through the mountain via tunnels to emerge at the bus terminus of Ogizawa.

Our final destination for the night was to be Nagano. The plan was to take the bus down the mountain to Shinano Omachi where we would catch a train to Matsumoto and then change for another to Nagano. But at Ogizawa, I saw a bus time-table for a direct bus to Nagano. I did not know this bus existed. In all my research, I never saw this. Had I known, I would have taken this. No doubt that it would be a longish ride at 2 hours plus but at least it was direct, saving us the hassle of multiple changes.

In any case it was moot point because our bags were waiting for us at Shinano Omachi. The local bus from Ogizawa took us down the mountain, threading through the onsen town of Omachi Onsenkyo. It looked pretty and might be a good option to spend the night if you’re angling for an early start to the Kurobe Alpine Route or if you’re getting in late.

Once at Shinano Omachi we had no problem retrieving our bags. I saw the bus to Nagano pull up and debated about running for it but decided not to and I’m thankful we didn’t or we would have missed the hidden views of Matsumoto. So instead of making a run for the bus we took the slow – very slow! – train to Matsumoto. It stopped at every little station, passing rice fields, schools and  and was more a neighbourhood commuter train than a fast inter-city one. But again, I appreciated the slice of life these trains give.

To end the post on the Kurobe Alpine Route, I saw this sticker stuck onto the railing at the Kurobe Dam. It sums up the reason why I travel: 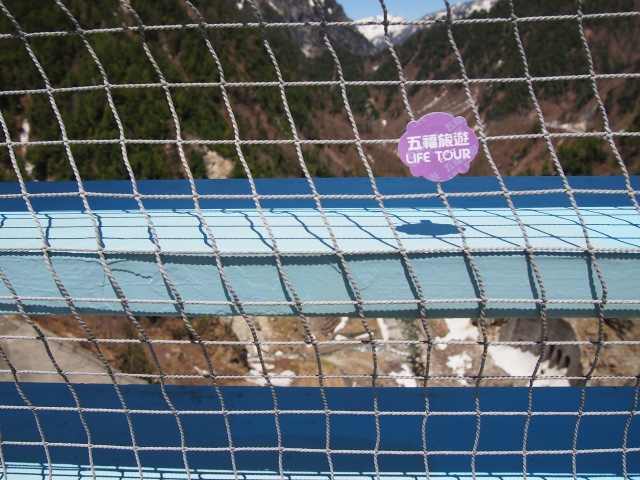 Travel is a tour of life, not just places. By the end of my days, I hope to have drawn a map of the places I’ve been, the people who have touched my life and all those secret places I discovered within myself on those journeys to the different corners of the earth.