In the shadow of Beijing’s towers 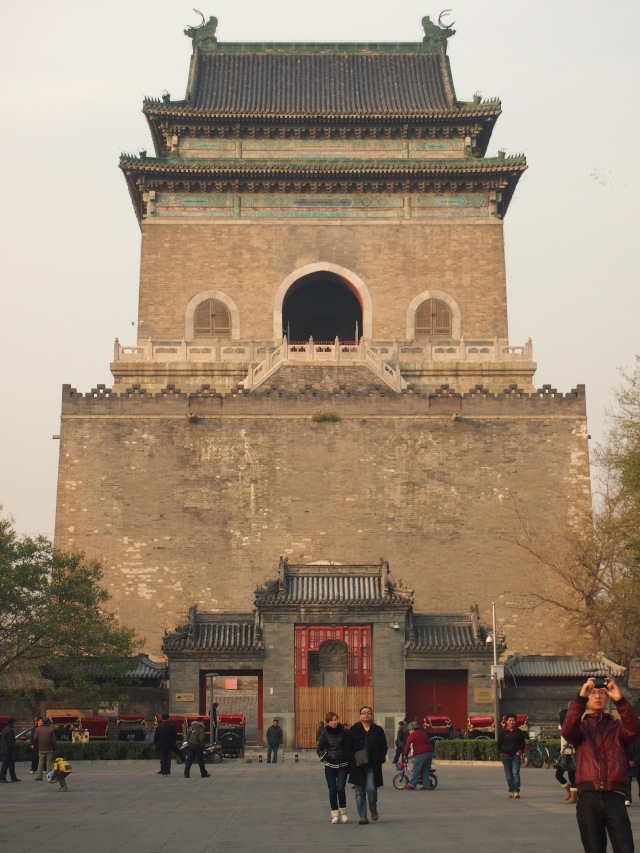 Before the skyscrapers on the outer ring roads sprang up, in the heart of the inner city, the tallest buildings around Beijing’s hutongs were the Bell Tower and Drum Tower. These are no tall, spindly needles but short fat hulks which dominated the skyline for several hundred years. Standing in a straight north-south axis, forming up with Jingshan Hill and the Forbidden City beyond that, the towers faced each other and together kept their roles as Beijing’s timekeepers.

The towers still keep watch over the hustle and bustle of the hutongs – today the tourist-friendly lanes of Yandai Jie or Tobacco Pouch Alley and a bit further on the hipster hangout and shopping alleys surrounding Nanluoguxiang. We wandered from our hutong hotel in the Houhai district, to the twin towers and around the shopping belt, covering in a day’s walk both historical landmarks as well as Beijing’s trendy restaurants and shops.

Drumming demonstrations take place throughout the day at regular intervals. It would not difficult to catch one. The sheer vertical climb upwards can be a real challenge. English signage is decent. The upper floor also has explanations of the different ways the ancient Chinese had of telling time. Fascinating stuff. Using metal balls and copper pipes and precise timing, you could tell time over a 24-hour period. I’m no math-head so the idea of anyone calculating this really gets my full respect!

At the Bell Tower, one look at the steep stairs – steeper than those for the Drum Tower – and I decided to wait in the forecourt of the tower, letting the kids climb up instead.

I’m glad I did because I liked the quiet minutes alone in the forecourt, just taking pictures of the sunset, the ripe persimmons over the stone wall, the pigeons wheeling around the tower. Only later did I realise that Beijing has a healthy population of homing pigeons reared largely by the people living in the hutongs, a tradition that has lasted since the Yuan dynasty. It is these little mundane details that I enjoy most about a place. Sure you can have a building that’s stood for centuries but the continuity of human behavior, preferences and habits (like pigeon rearing)  is what makes life and travel interesting.

The hutongs are lived-in spaces filled with all the colour and chatter of Beijingers’ daily life. And so while its fun to stick to the touristy streets of Yandai jie or Nanluoguxiang, just a quick turn off these main crowded thoroughfares and you’ll find yourself in a maze of quieter lanes where people live and shoot the breeze with the neighbours.

While walking through the hutongs, we spotted these posters (below) that gave an interesting insight into today’s Chinese world: 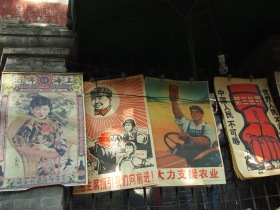 Posters like these are not foreign to me, having come from Singapore where the government still uses print media to communicate key social messages. I still remember messages and campaigns like: “Two is Enough” (telling us to stop at two children per family back in the 70s), “Make Courtesy Our Way of Life!” (Singa the Courtesy Lion still hangs around today, some 30 years after he made his debut persuading us Singaporeans to behave better) and of course the very assuring “It’s Just An Introduction!  The Rest Is Up To You!” (a campaign to persuade marriage-averse Singaporeans to tie the knot).

In China, it’s not so different. Not so long ago, it was all about Mao and strong anti-imperialist sentiments. But today, this set of Chinese government propaganda posters have a different agenda – to persuade couples to avoid gender selection during pregnancy. With the intense traditional preference for boy babies over girl babies and the one-child policy, many couples do scan for gender during pregnancy. While it is unclear just how many female foetuses have been aborted or abandoned after birth thanks to gender selection during pregnancy, the official numbers are just the tip of the iceberg. Many surely go unreported. What IS clear is the increasing imbalance of genders within China with far more baby boys born than girls. I’m not sure if these posters were ever effective in their messaging. But I’m quite sure that stylistically, yesterday’s strong illustrative flair wins hands down over today’s cutesy computer-generated cartoony images.

This being the cusp of autumn and winter, there was a distinct chill in the air. In fact, the lakes at Houhai were already icing up in some spots. In this weather, there’s nothing like a steaming hot sweet potato to hit the spot. In Chinese cities this is a common sight where streetside hawkers sell steamed sweet potatoes from a heated steel drum. 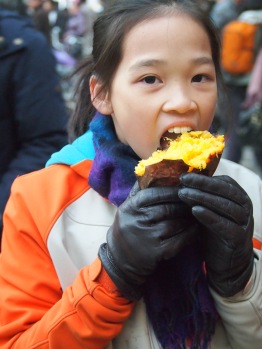 While lunch was a one-hour wait for a famous Beijing hotpot eatery near the tourist belt at the Houhai Silver Ingot bridge, dinner was a bewildering array of choices in the touristy Nanluoguxiang vicinity. Some of the eateries had very funny names like this one below: 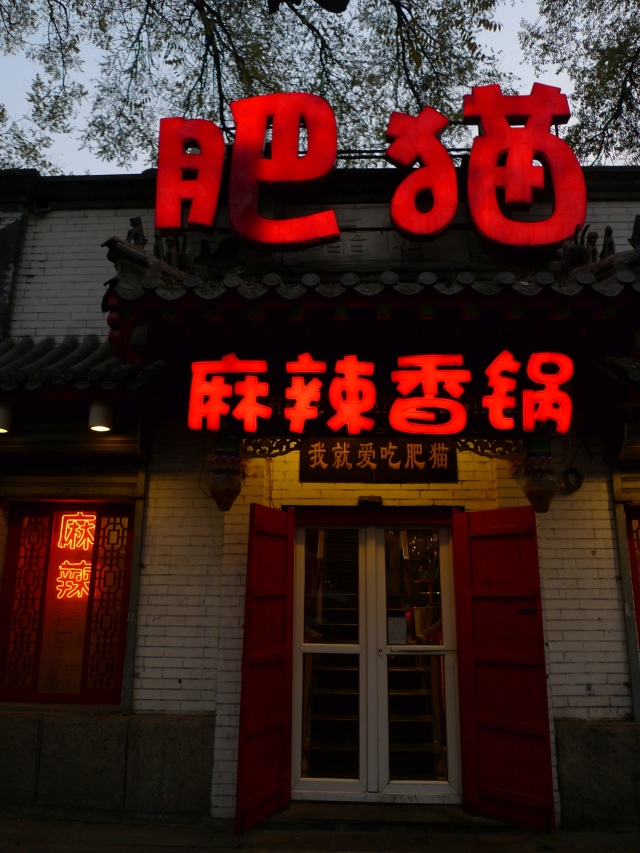 Translated, the name of the restaurant is “Fat Cat” and the signboard says “I just love to eat the Fat Cat”! We laughed hard because we have one very fat and furry cat back home waiting for us and we can’t wait to squish him, not eat him! 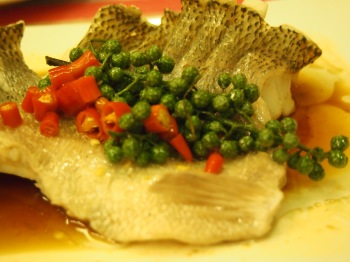 Dinner at a cheery casual eatery at Nanluoguxiang was quite good. We ordered a couple of dishes to share with some rice, including this poached fish with hua jiao. I can’t think why some people complain about Chinese food. I enjoyed every meal I had in China. While each region had its specialty, it seems like the Ma La flavour is really everywhere. This is the tongue-numbing spicy flavour so predominant in Chinese kitchens from the South to the North. The numb buzz is due to the presence of hua jiao (flower peppercorns). I’ve tried to recreate the Ma La flavour back home with no success. Without the huajiao it just does not work.

The night ended with a shadow puppet show and demo back at the hotel. The Shichahai Shadow Art Performance Hotel is a former hutong courtyard home now elegantly converted into a boutique hotel thematically focused on the dying art of shadow puppetry. Tastefully framed shadow puppets, some softly tinted in colour, others in monochrome, but all painstakingly crafted, delicately-laced together formed images of well-known historical and mythological Chinese characters such as the Monkey King, the Chinese general Guan Yu etc hang on the walls of the hotel. The centrepiece of the lobby is the small but beautifully carved wooden stage.

As the lights dimmed in the lobby, you could see the children’s faces aglow with amazement and wonder at the story and the art coming to life before their very eyes. In an age where animation and computer imagery and instant gratification of smart phone and tablet games  and video are part and parcel of life, it was great to see them so thrilled with this artform. This is how it should be – artistry and story-telling combining to entertain, beguile and inspire children.

After the performance, children and adult alike crowded backstage where the performers were happy to explain the process and to let them have a go at handling the puppets.