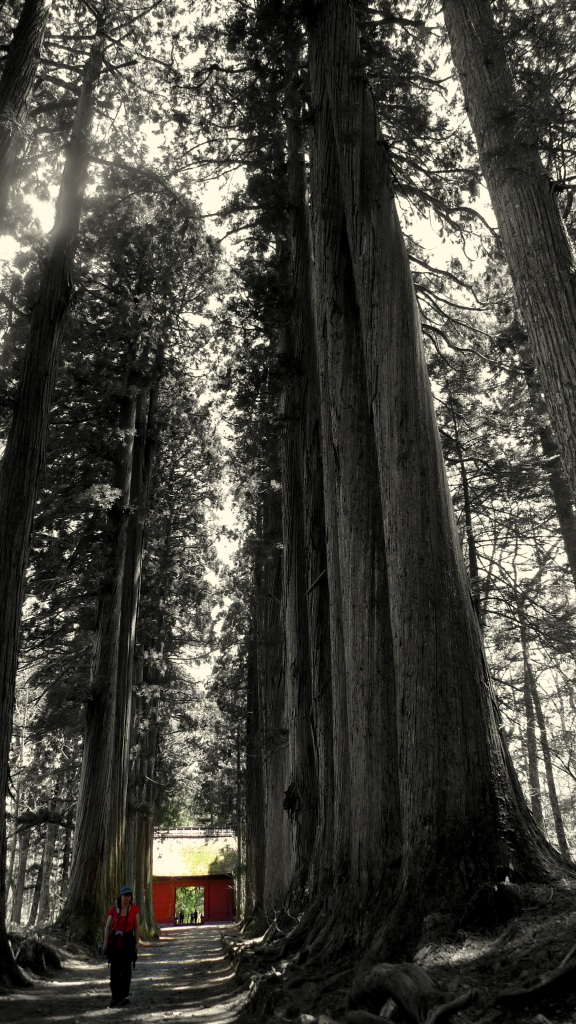 As with any pilgrimage, it is often the journey that is just as, if not more important than the destination. In the magnificent tree-lined path leading to the innermost sanctuary of one of Japan’s oldest Shinto shrines, there is time for lots of reflection. The 2km approach starts innocuously enough – from a carpark and a shop selling green tea ice-cream. But that’s the last of the 20th century you’d see for a long time as you start on the approach to the shrine.

Few know about Togakushi, a small village hidden in the hills behind Nagano. It is not on the mainstream tourist radar. Togakushi’s little-known secrets are intriguing and worth a day trip at least. Combine the mystery of a ninja clan, the air of holiness surrounding an ancient shrine and probably some of the best soba you could find anywhere in Japan and I’d say Togakushi is definitely worth a trip. 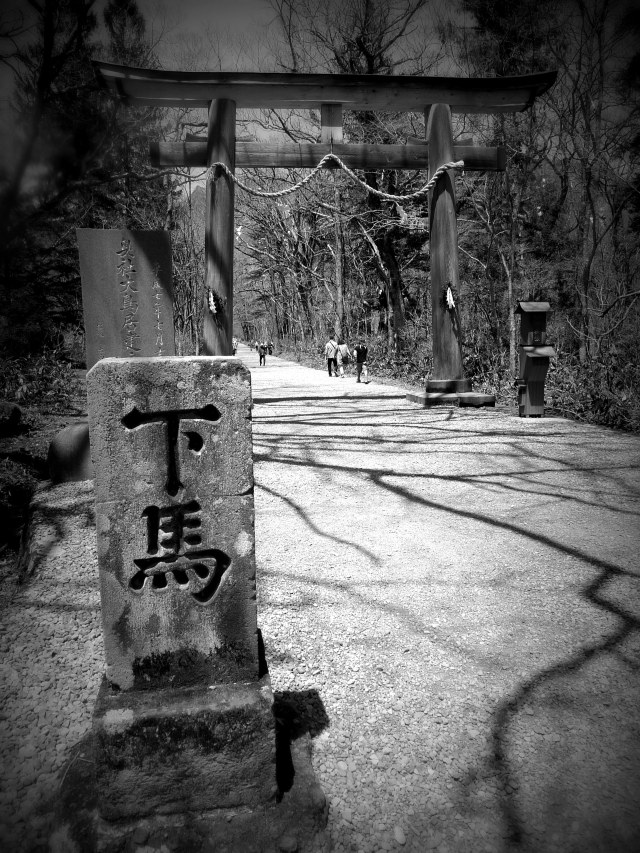 Follow instructions: Dismount. From this point, beyond the wooden torii, you are on holy ground and whether commoner or king, everyone approaches the inner sanctum on foot. I made sure I finished my cone of matcha ice-cream before starting on the long walk in. From this stone marker, it’s 2km all the way in to Okusha and  then another 2km out.

The first half of the walk is uneventful. It was a gorgeous sunny day and many were out enjoying the weather. I shared the walk with grannies, ladies in heels, babies in strollers and possibly a handful of other travelers. In mid May, Japan was clearly heading into the warmer summer months already and it was hot enough for me to abandon my jacket .

Midway through the walk, the scenery gets more dramatic as you come to the bright red Zuishinmon gate, a lovely contrast in colour with its moss-tinted thatch roof. 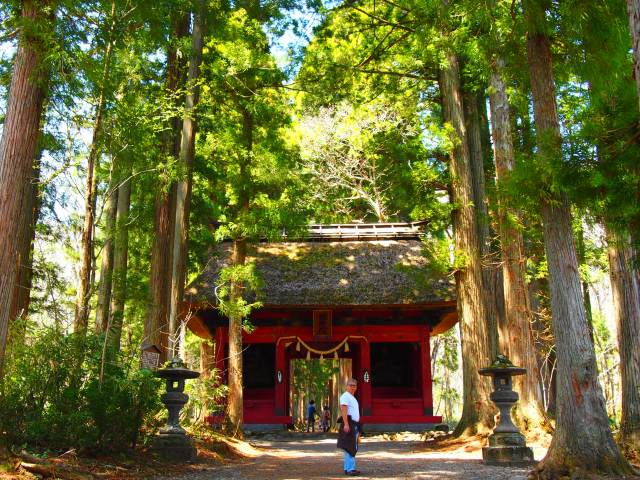 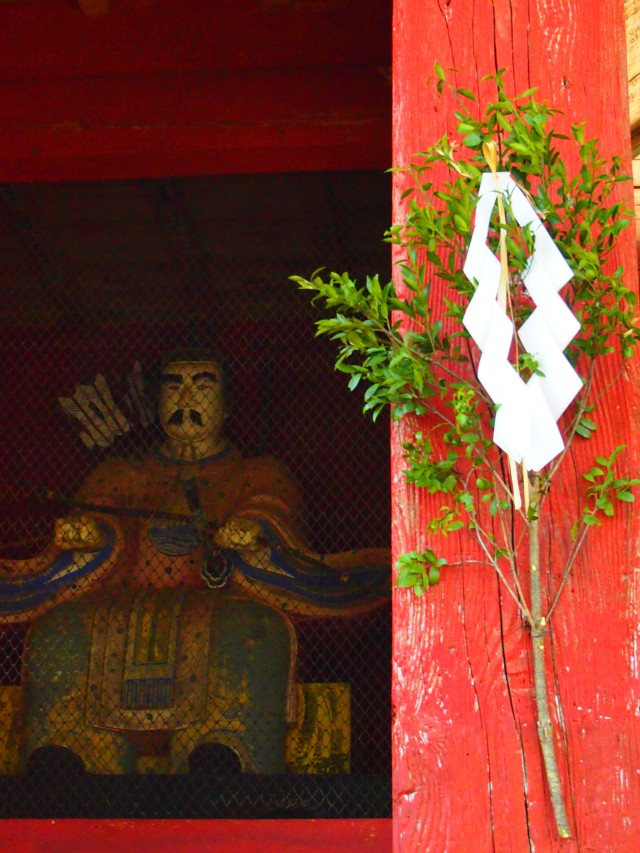 Beyond this point the path is lined by tall and imposing cryptomeria trees, many hundreds of years old. They stand sentinel from the Zuishinmon Gate to the innermost shrine, Okusha, large and imposing, their gnarled roots sometimes taller than a man. 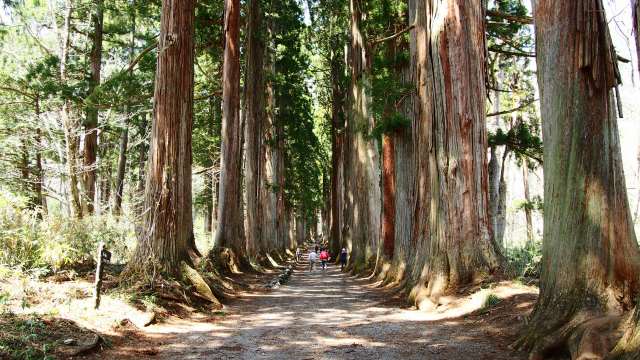 It’s a shady walk but felt a bit too long to me. Particularly when, after huffing and puffing my way up several slopes and stairs to arrive at Okusha, my first reaction was: “Huh? You mean that’s it?” After the bright cheery red of the Zuishinmon Gate, the Okusha is more subdued in style. You couldn’t tell, from the nondescript structure, that within it apparently lies a Shinto treasure, one of the three important articles that were used in Japanese creation mythology.

Adjacent to the long walk in to Okusha, there is a marshy area and in spring, the whole area turns white with the blooming of the skunk cabbages – an unfortunate name for a pretty white lily! It’s a peaceful spot to wander through if you have the time.

We started our day in Togakushi right at the top of the Togakushi loop with the Ninja museum, followed by the walk into the Okusha before taking the bus down to the middle shrine for a late lunch. The bus from Nagano stops just outside Okusha. Cross the road and you’ll get to the really fun Togakure Ninpo Museum.

For all you wannabe-Ninjas, this is where you get your crash course in being a Man (or Lady)  of  Stealth! The museum comprises several buildings even spaced out in generous grounds. Not much in the way of English explanations but you don’t need that to tell you what those deadly ninja shuriken, darts, arrows, daggers and all manner of innovative weaponry can do. The exhibits alone are interesting but the kicker for me is the Ninja House. Don’t miss this.

It looks like a normal house from the outside but inside has all sorts of traps, secret doors, passageways etc. I won’t spoil it for you but will just say, it’s totally worth the time and the money to go through the house – alone. There are no guides for this. You’ll just have to bungle your way through, which adds to the thrill. 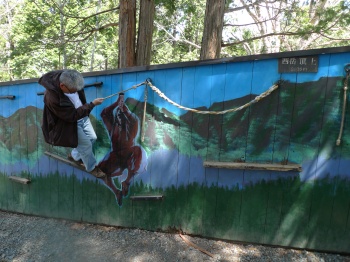 Outside, there is a small but fun ninja training circuit with an obstacle course, a pagoda that shakes when you step in (we thought we were in an earthquake at first!) and various funfair style booths where you make like a ninja and throw your shurikens. Its kitschy but lots of fun for little kids and big kids like us! You could easily spend at least an hour and a half here.

Togakushi’s three shrines are separated by about 2km each. The hub of the village is in the middle shrine. This is where most people seem to get off the bus from Nagano. The shrine here is guarded by a picturesque old wooden tori and sakura trees in bloom.

About 800 years ago when the monks first arrived at Togakushi, they brought something valuable with them – the art of soba-making! Today, foodies in the know will tell you that Togakushi soba is reckoned to stand among the best in all of Japan. Thanks to the village’s proximity to the mountains, crystal clear pure water from the snowmelt and the springs nearby ensure a steady abundant supply of good water to make good soba.

We knew that Togakushi is famed for its soba but had no idea which restaurant was best. So we did the ever reliable Singaporean method for sussing out good food – look for the queue! We didn’t have to look far. It was just barely a stone’s throw from the middle shrine. Uzuraya is a double-story restaurant shaded by a huge venerable cedar tree girded with a straw rope and paper, signs of kami occupancy.

It had all the right signs of a good food place: the staff were busy and cheerful and the place was packed – upstairs and downstairs – with the sound of conversation, laughter and importantly, engaged slurping! The glassed up open kitchen gave us a look into the bustling kitchen: 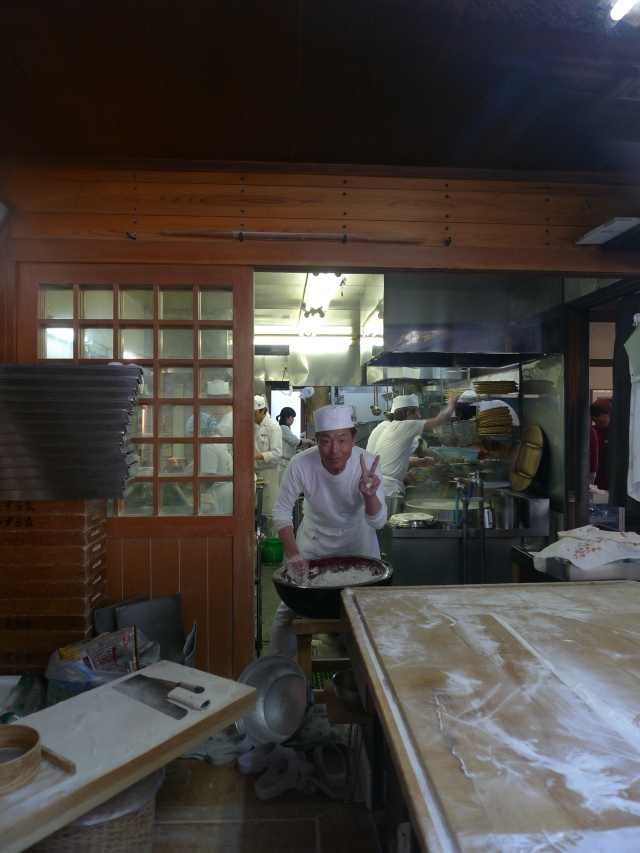 One of the two brothers running the show at Uzuraya 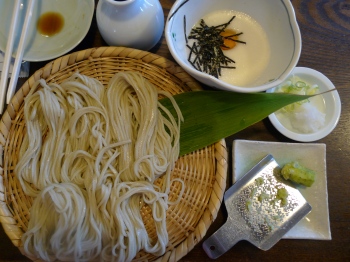 And the food, yes it was good. I had the tororo soba at 1,050yen (right). This a cold soba where you dip into the accompanying nagaimo paste with a quail’s yolk thrown in. The portion was generous and the soba was silky good. This is a family-run establishment, handed down through generations and the brothers are clearly passionate about their craft. I only wish I had a stronger grasp of the language to really converse with them.

Post-lunch, we took the bus down to the first shrine, which looked deserted. The approach is through a steep flight of steps. We didn’t go up because we had to catch the bus (all about timing) or risk staying on in the area for at least an hour. There was little else to see except the shrine anyway and we were tired so we snapped this picture and  hopped on the next bus back to Nagano,

We bought the Togakushi Kogen Free Kippu pass that allowed us three days worth of travel between Nagano and Togakushi. This cost about 2500yen. There is a round-trip ticket at 2400yen but we figured the difference of 100yen was not much and it made more sense to buy the pass as it allowed us to take the buses even within the Togakushi area between the middle and upper shrines as many times as we could if we wanted to. We bought the pass from a shop directly across the road from our hotel, the Metropolitan Hotel, located right next to the train station. The TI at the JR Nagano Station can probably give you a map and clearer directions on how to buy the tickets. It takes about an hour to reach the Okusha bus stop from Nagano.

This entry was posted in Japan and tagged Nagano, ninja, shrines, soba, Togakushi. Bookmark the permalink.