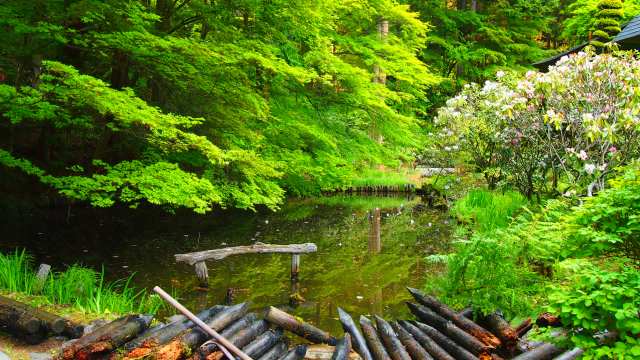 If you asked me where my deep affinity for all things Japanese came from, I guess it must started with those calendars. As a child, I was always drawn to the beauty of the Japanese garden scenery reflected in the glossy wall calendars hanging on my kitchen wall. Whether it is a red lacquered bridge, or a fiery-red autumn scene, somehow these appealed to me even back then. So it was that day, in Bessho Onsen, the light and spirit of the place conspired to give me so many lovely pictures that brought to life those very scenes I remember all those years ago. Standing in front of this pond in Anraku-ji for instance, with the rich vividity of the spring colours all around, I thought I had stepped right into one of those old calendars.

But that was not all. There is something about Bessho Onsen that has stayed with me for so long, long after we have left, months after we returned. There is a sense of calm, of well-being and comfort that I experienced that day in the old hot spring town. I don’t know what it is and I’ve been racking my brains to put my finger on it but it always eludes me. To be honest I don’t think Bessho Onsen in itself qualifies as a five-star destination if you’re expecting important showy heritage sites as key attractions. But it is that special combination of a small town feel, walkable attractive lanes backing into dense green hills among serene temples and some of the oldest recorded hot springs in Japan that make Bessho Onsen so pretty. If its good enough for the Heian aristocrats to record in Sei Shonagon’s The Pillow Book, it’s good enough for me. 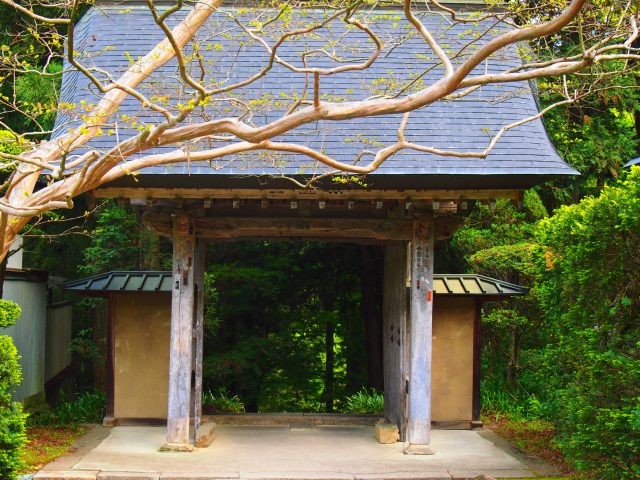 The walk up a steep flight of steps flanked by lusciously shaded greens to lovely Anraku-ji ends at this gate. Anraku-ji is the oldest Zen temple in all of Nagano prefecture. And in my book, one of the loveliest. Pulling back the frame further, we see the gate and the bell tower. 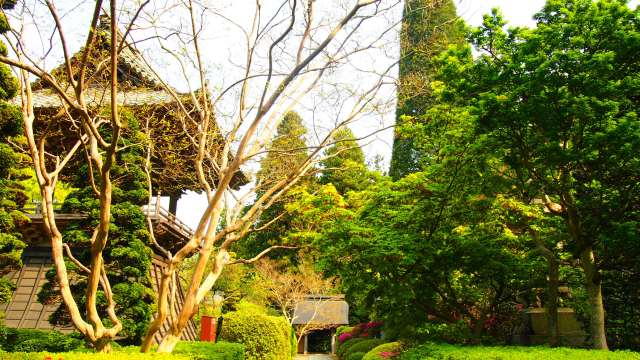 On the day we went, as with the rest of Bessho Onsen, there was hardly a soul around. We pretty much  had the place to ourselves. The gardens were lovely in the evening light.

Unquestionably the gem of Anraku-ji is the unique wooden octagonal pagoda, the only one of its kind in Japan and designated as national treasure.

But to me, I rejoiced more in the slightly unruly glory of azaleas in full bloom in the garden of the house behind the main hall. The bushes looked like they were on fire with the blaze of fuchsia and red. I envied the occupants of this house. At night, under moonlight, with the frog chorus in full swing, one can only imagine how magical it can be. 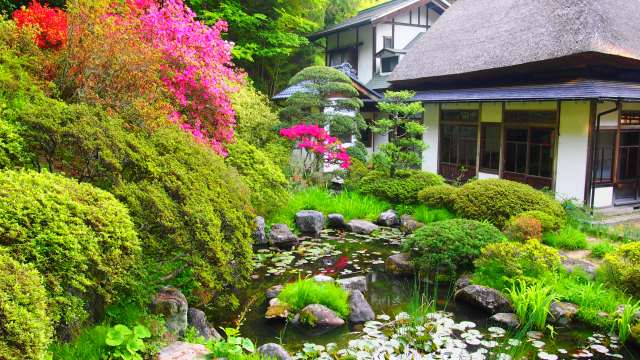 Leaving Anrakuji, we followed the signs to Jorakuji. The path was set on a hillside and we could see the rooftops of Bessho Onsen spread out below us. The fun for me, whenever I travel, is not just to tick off the must-see sights on a list, but to indulge my sense of the curiosity and fantasy, wondering each time I see a house or a village, who lives there and what their lives are like. 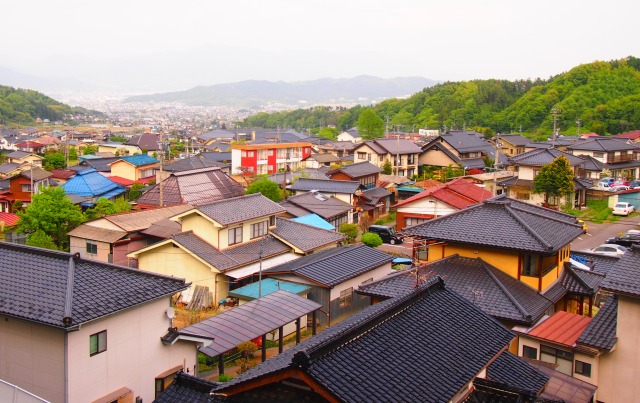 Bessho Onsen is not that big. In the distance is Ueda city where the spur line to Bessho Onsen begins, and where you catch the shinkansen to Tokyo or Nagano.

Further up the lane from Anrakuji is Jorakuji, known for its unusual thatch roof main hall. Probably built about 200 years ago, Jorakuji’s main claim to Buddhism holiness is the series of sacred texts, hand-copied by the founder of Kyoto’s great Nanzenji temple sometime in 1292. These still reside here today. Rightfully more like a humble cottage with its thatch roof than a pompous prayer hall, Jorakuji’s appeal lies in its quiet simplicity and the harmonious blend of its humble architecture with the natural surroundings. The huge ancient umbrella pine in front of the main hall is hundreds of years old. Like a crusty old grande dame at a ball, supported by poles and stands, it holds court regally with the skirt of its branches spread out wide and low.

A little further to the rear is a line of lovely weathered Jizos: 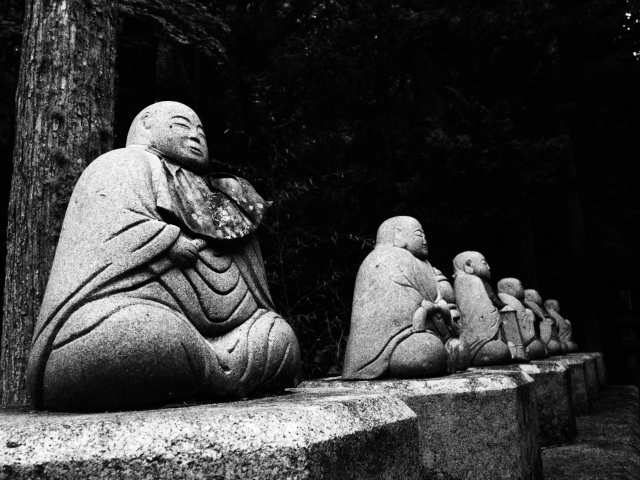 Rounded as Botero’s creations, they sit placidly in wait.

Bessho Onsen’s most important temple however, is neither Anrakuji nor Jorakuji but the Kitamuki Kannon. This is the complementary temple to Nagano’s Zenkoji. They face each other in a straight line as the crow flies. Unusually for temples which usually face south, the Kitamuki Kannon temple faces north to Zenkoji’s south. 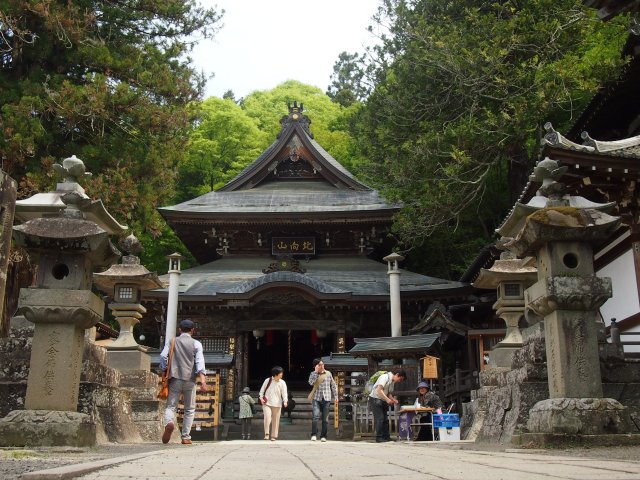 Because Kitamuki Kannon temple had the reputation of answering prayers , we did the usual and wrote our wishes on an ema and hung it on a rack, praying for health, happiness and success. Looking back almost a year later, I think what we wished for generally came true. Also on the temple grounds is this venerable 1,200 year old tree, the Aizenkatsura Tree, which is believed to have the power to connect people. I’m not sure how that works but something about that resonates well with me.

With a miniature version of the Kiyomizudera stage and the sprinkling of so many temples and shrines in the hills ringing the town, Bessho Onsen is also known as Little Kamakura for good reason. It was unplanned but so fitting that we came here because we would, at the end of the trip, also visit the real Kamakura. But like all unplanned stops, there are lovely surprises. I had the same experience with the green tea town of Uji.

Getting to Bessho Onsen:

It’s an easy hop from Tokyo via the Nagano Shinkansen which whisks you to Ueda City in under an hour and a half. From Nagano, its a quick skip to Ueda in 12 minutes via shinkansen. Once at Ueda, the electric railway takes you to Bessho Onsen in half an hour. Ueda is quite a big station. There are large 600yen lockers there to store luggage while you make the day trip to Bessho Onsen.

Bessho Onsen’s quaint little railway station is the terminus of the electric railway. It sets the tone for the town, looking like a beautiful retro country station straight out of Hayao Miyazaki animated piece with its blue and white wooden trim and its large multi-paned windows. I almost expected Satsuki Kusakabe, her little sister Mei and Mei’s big furry friend Totoro to step into the frame.