The beauty of Hui architecture

The land around Huangshan is the heart of Hui architecture. From as far back as the Song dynasty, Hui architecture has flourished – characterised by its tall white walls, gracefully sweeping roofs in dark grey tile, impressive wood carvings and a central airwell. The wealthy Hui merchants eventually took this style further east to Yangzhou, Suzhou etc. But while I loved the big courtyard mansions and gorgeous landscaped gardens of Suzhou and Tongli, these white houses and villages were not similar at all to those. I can’t claim to be an architecture scholar so the observations I made in this post are just that – my layman observations. But I thought that if we were going to visit these villages and talk about them, it would help if readers could also have some insight into these details and features of these houses.

I learned a few things here. A lot of the architectural details dovetail with local beliefs or feng shui practices. For instance, the number of steps in front of the entrance of a house indicated the occupant’s occupation, with a single step for merchants and three steps for government scholar officials. The single step wishes for business success with just a one-time capital outlay. The three steps  plays on the common Chinese saying “步步高升” which means success with every step up.  The picture below shows a single step at the entrance to the houses – denoting merchant ownership.

Houses in these Hui villages are built right next to each other separated only by narrow alleyways (to prevent fires from spreading), with tall walls that deter thieves and protect privacy. 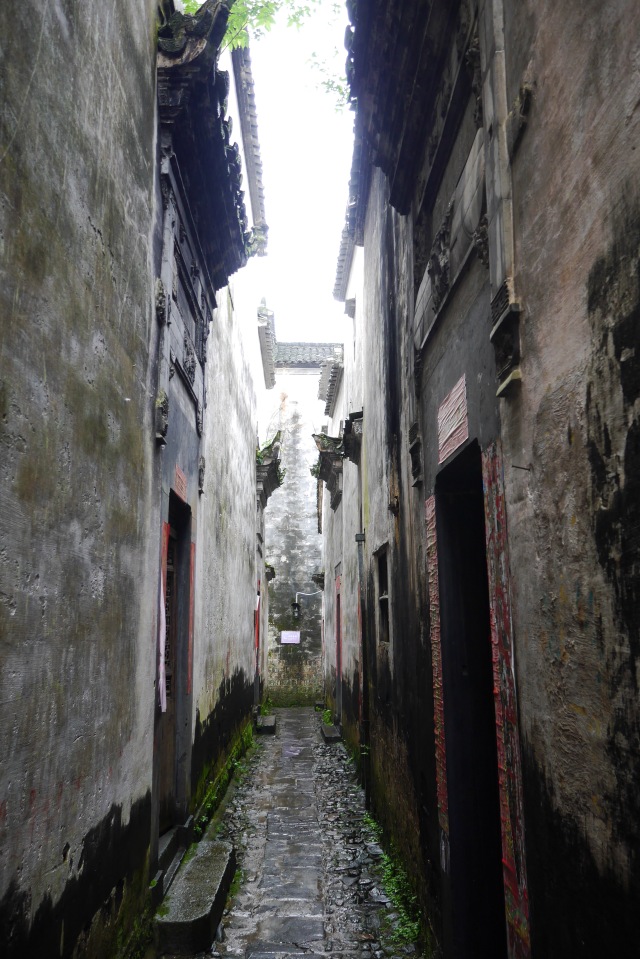 Light enters these buildings through an airwell in the courtyard. Windows if any, are small, placed high in the walls and serve to let in light and ventilation. Rain water is collected and funnelled into holding tanks beneath the courtyard – and even here, symbolism takes centerplace with drain covers shaped in either a Chinese coin design or in a bat motif. The Chinese love their homonyms and the word for bat closely sounds like “transformation to fortune”. In this case, water signifies abundant wealth and well, you get the drift. In some houses, a huge jar sits in the courtyard – symbolising the retention of wealth and also acting as a water source in the event of a fire. 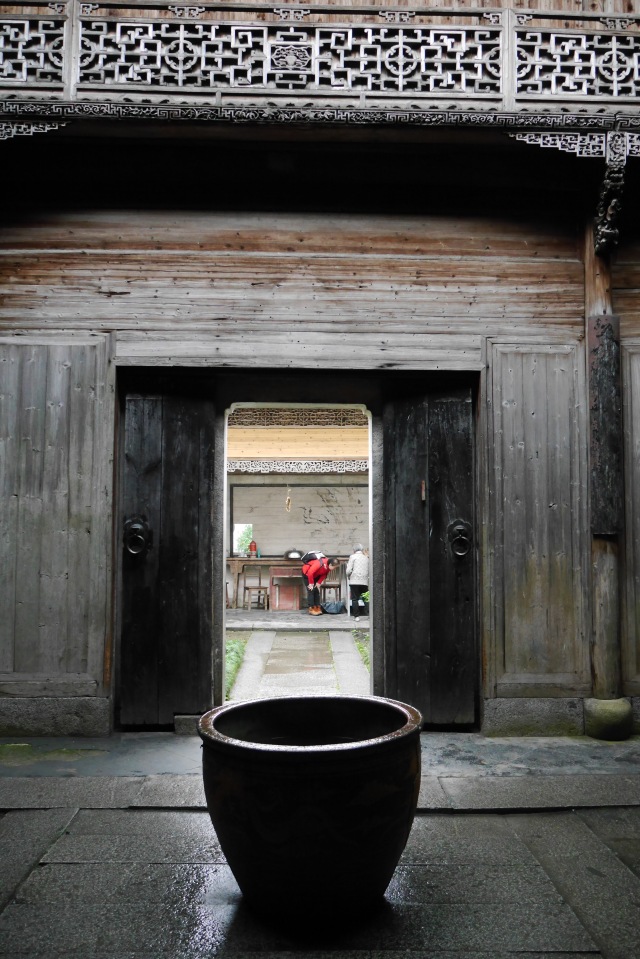 This is Chengzhi Hall in Nanping village near Huangshan. This house is differentin that the entry to the house opens out into a larger garden before the double doors lead into this courtyard and the actual residence. Note that the current owners, an elderly couple, descendants of the original owner, still live here. Notice the slab of cured ham hanging from the ceiling in the entry way in the background!

But the key architectural feature are the splendid wooden carvings found on the doors, windows, lintels, under the eaves, on the beams. The attention to detail is marvelous, especially when you consider that these were painstakingly hand carved several hundred years ago. Because rich and successful merchants could not expand their property to be larger than the resident government officials’, they could only show off their wealth and status by ordering ever more lavish carvings for their homes.

In the hands of the gifted craftsmen, the birds, butterflies, lions, dragons, unicorns, fishes, peonies, clouds came to life. In the hands of the Red Guards in the Cultural Revolution, these were desecrated – faces of gods and humans alike were crudely cut off. Some home owners were clever and fast enough to hide these carvings by padding over with soil but most were eventually found and destroyed (below).

Typically in these houses, the upper floor is reserved for the maiden of the house, who is not allowed to venture below-stairs, much less go out of the house. Unfortunately in all the houses we visited, the opposite was true. We were never once allowed to go to the second level, which was either closed off because they were living quarters of the residents, or because the structure was not able to take the stress of thousands of feet stomping up and down.

Most of the houses which were open to visitors also had their courtyard spaces converted into souvenir shops or antique shops. This is one way the residents can supplement their income. Tourism authorities may rake in entry fees to the village but the residents never benefit from this. We were told that owners of certain houses designated with historical interest were told to open them to visitors and they would be ‘compensated’for doing so. But the ‘compensation’ sum is always small and never enough to live off, or to actively preserve and maintain the house. As a result, several residents have dropped off from the scheme, preferring instead to ‘rent’ their properties out to developers and hoteliers who would renovate and convert these into inns. Financially this worked out better for some. But it also meant that visitors were no longer able to see these houses since only guests of the inn had the privilege.

While we tune out the souvenir shops, once in a while we do see something interesting:

Almost 99% of the houses we saw were owner-occupied. In some cases, the owners no longer live there but in newly-constructed houses either within the village or slightly further away. They prefer modernity and the comforts of the 21st century to living in these damp crumbly old buildings. Also struck us that many of these villagers were quite poor but ironically living in Qing or Ming dynasty museums! Some of their furniture, obviously old and well-used, would not be out of place in an upmarket antique store and possibly selling for thousands of dollars. 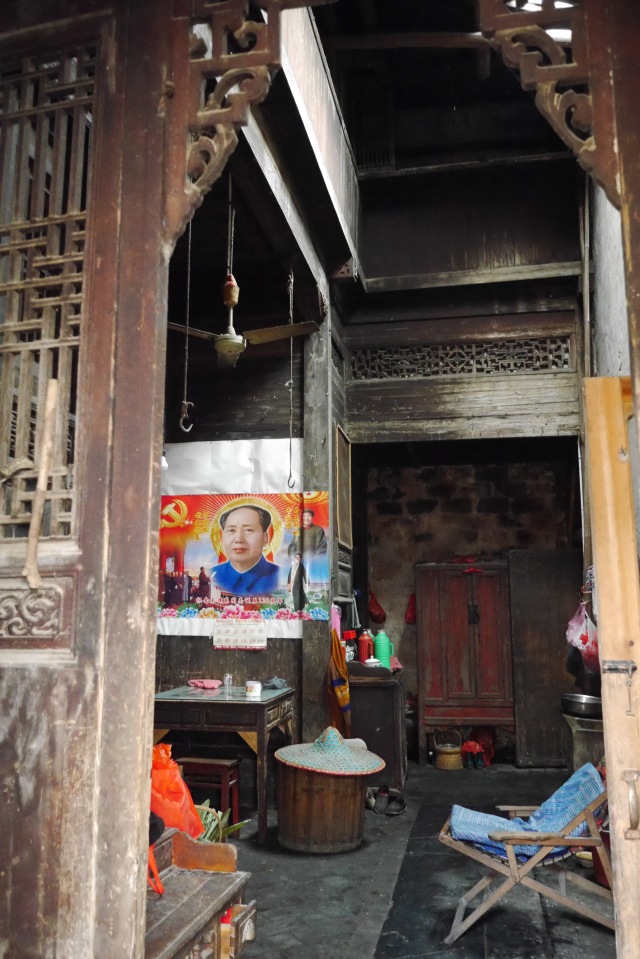 This entry was posted in China and tagged Huangshan, Hui architecture, Nanping. Bookmark the permalink.

1 Response to The beauty of Hui architecture