The hills around Hongcun are dotted with many similar ancient villages. Nanping, Lucun, etc are some of the villages worth checking out when the crowd in Hongcun gets too much. There, the tall white-washed walls and graceful swoops of dark tiled roofs that denote the Hui style are common. Many of these old towns are not on the average tourist radar and have fallen into varying states of quiet decay. As the young moved from these old villages to the big cities, the population has dwindled, leaving behind mostly elderly residents and creating an impression of lonely depletion. Or maybe it was just because of the rain that day.

one of Nanping’s many ancestral halls

While the tourist crowd zeroes in on Xidi and Hongcun, we were looking for authenticity, places which were well-worn and lived in, bypassed and a little forgotten by the world. Having said that, we did go to Xidi just to cross it off our list since it was in the UNESCO list along with Hongcun. But it looked pretty much like a carbon copy of Hongcun with everyone doing the tourist shuffle in and out of cleaned up mansions and souvenir shops. We didn’t spend much time there. None of the pictures you see in this post were taken at Xidi.

We headed to Nanping next and there we found what we were looking for – a tangle of rain-slicked cobblestoned alleys devoid of tourists, stately Hui mansions stained grey with age and occupied comfortably by residents.

In Nanping, big ancestral halls and old schools with their high ceilings and central courtyards stood empty. Some of these were used as locations in Chinese films such as Judou by Zhang Yimou.  Apart from a group of art students camping out in the narrow streets with stools and umbrellas, doggedy sketching away despite the rain, we hardly saw anyone.

cat and artist dodging the rain

The drizzle only added to the lost and slightly pensive, forlorn feel of the place. The damp and the rain gave the streets a nice glossy sheen. The banks of moss and fern that sprang up on the grounds and the walls were a bright luminous green against the black and grey of old stone.  Some walls still held faded Chinese propaganda poems and phrases and it was fun testing my limited Chinese to decipher what they meant. The villages’ many alleys twisted and turned. We never were really sure where we were going and enjoyed getting a little lost. With the tall walls and the narrow lanes (some only as wide as a pair of shoulders), the claustrophobic may find it a little disconcerting.

Hui houses are known for their tall walls that kept intruders out and the ladies of the house safely in. The tall walls were also a fire prevention design. This is a kitchen in a Hui house with only a small opening to let light in. And yes, some houses still use firewood.

We peeked into some open doorways to glimpse how residents furnished their homes. It struck me that these locals were essentially living in unrestored Ming dynasty architectural gems; many with elaborate fixtures and carvings that would have been best appreciated in a museum. But unlike the carefully restored mansions with curated furniture to recreate the ambience of the past centuries, the living spaces we saw in these villages were filled higgledy-piggledy with everyday items. Decor and style was not top of mind. Wonderful to see ordinary life filling an extraordinary space, but purists may balk at how much daily wear and tear these houses get. 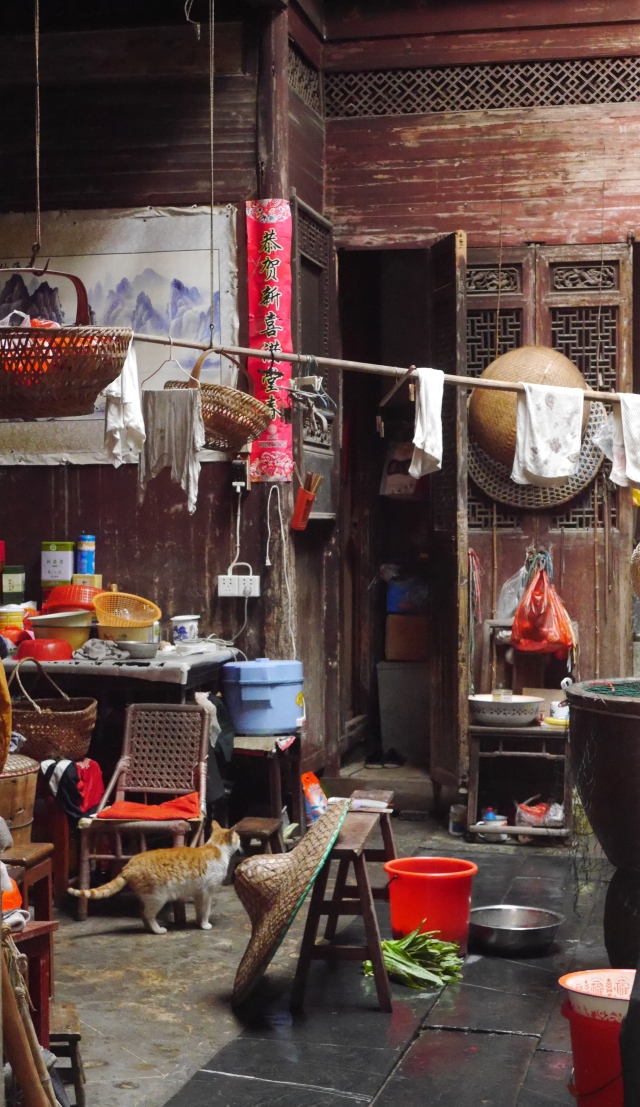 Most bedrooms are in tiny, dark squares with very little light and of course, daily ablutions are still done the old-school way with water in basins. Some old lacquered cabinets, chairs and washstands that would not be out of place in expensive antique stores are seen casually still in use, almost as an afterthought than for any historical or aesthetic value. In other homes, what would have been an expensive antique on display, revered for aesthetics, age and craftsmanship, was used here exactly as intended – as a piece of practical useful household furniture.

There’s an astonishing amount of greenery in these old villages as green creepers over-run the old walls, sprout out of the edges of walls and floors or take pride of place in a central courtyard. In walking through the maze of streets, we really had no idea or plan where we were going. Once in a while, the narrow streets would open up into farmland and that meant we had reached the outer edge of the village. We saw few residents and those were saw were usually elderly.

Lucun is another village not far from Hongcun. In fact, it is possible to walk between Hongcun and Lucun. Lucun’s nod to modernity is a new carpark at the entrance to the village and a small office where the entrance fees are collected. But once across the bridge, the village is as sleepy as they come. A rushing river and a family of geese swimming upstream add to the charm of the place.

It was way after lunch by the time we arrived at Lucun. In fact, Lucun was initially not on our list of places to go but our driver, clued into the sort of places we wanted to visit, enthusiastically recommended his village – Lucun. While we were wandering around, he would take the chance to pop back home for a while.

We asked him what was good to eat and he proudly recommended a restaurant across the river. I regret not asking the name of the restaurant because we had such a simple yet delicious meal here.

The owner was also very friendly and chatty. When she heard we were Singaporeans, she proudly told us that the ‘big boss’ of the Banyan Tree resort a little uphill, had eaten at her restaurant too. This would have been Ho Kwon Ping, the man behind the Banyan Tree resorts. She told us that he had come for lunch one day. His staffers had come a few hours before to place their orders ahead of time. He had apparently enjoyed lunch so much that the next time Banyan Tree hosted a banquet, it was held in the big Hui mansion across the street and her restaurant had catered the food.

Mr Ho had good taste. Although lunch was already long over, the lady helpfully whipped up two simple dishes for us to have with rice. It was just an omelette and another dish of pork fried with peppers and tender fungi. But it tasted heavenly. And at the price of RMB44 in total, it was great value for money. It was so good that it inspired me to buy a bag of fungi back home. But despite all my attempts to recreate that simple dish, I could never come close.

We spent a delightful hour or so wandering around Lucun. It was well worth a stop. Quite a number of the bigger mansions and halls had some signage and some explanatory in English. Some of what we saw in Lucun:

The next stop after Lucun was the Mukeng bamboo forest where the famous fight scenes in “Crouching Tiger Hidden Dragon” were shot. Alas unlike Master Li Mu Bai, we couldn’t just gracefully leap from the tips of the bamboo. Mere mortals like us took the stairs and be warned – there are A LOT of stairs. I think we barely covered 1% of the bamboo forest but it was enough to take in the view from the top and head back down.

Mukeng bamboo forest is not far from Hongcun but to be honest, it’s really only worth a visit if you have not visited a bamboo forest before or if you’re really a diehard fan of the movie. But if your time is limited, you’re probably better off spending time in the villages.

On the way back to Hongcun, the driver stopped at an overlook for us to take some pictures: 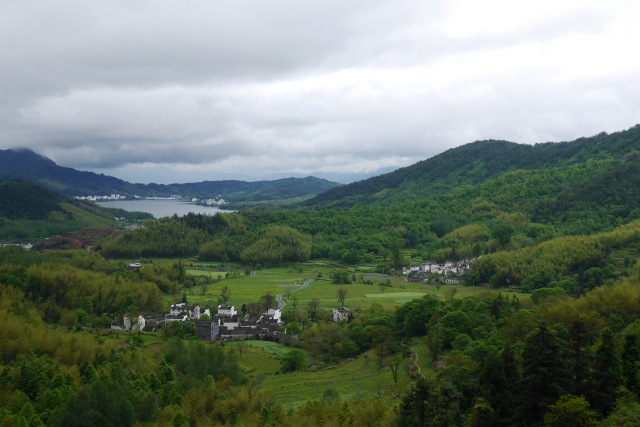 That ended a lovely day driving around the lush hills of Anhui to see these peaceful villages. It’s left me so fascinated with these old Ming mansions that I briefly toyed with the idea of buying one of these rundown mansions, restoring it and living here.

Getting around the villages:

We hired a taxi driver from the many hanging around the entrance to Hongcun. We bargained down for a full-day’s hire and eventually paid about RMB250. It was considered low season price and the driver told us that in the high season, this fare would usually range from RMB400 to RMB500. Nanping and Lucun also charged entry fees but these were far less than what was charged at Hongcun and Xidi. Nanping was RMB43 and Lucun was RMB50 per person. Both Hongcun and Xidi charged RMB104 per head. But there are many ways to enter the villages and those who choose not to pay can easily take a different route in, bypassing the ticket booths at the main entrance, the exception being the two star villages of Hongcun and Xidi, which were more tightly controlled.