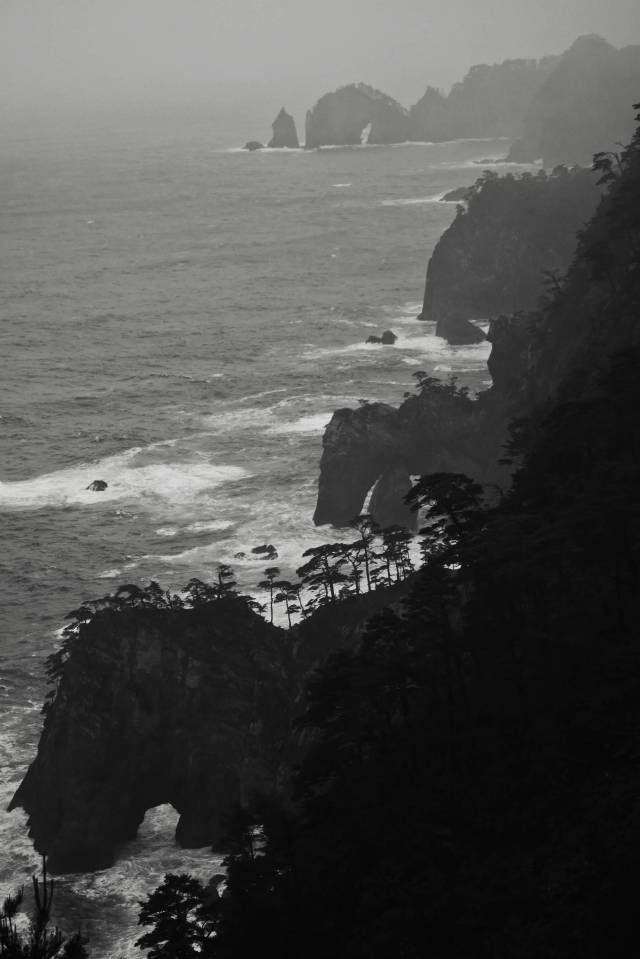 The weather report said rain. And boy did it pour. But that did not put a damper on our plans to explore one of Japan’s most beautiful coastlines – the Sanriku Coast. No doubt, when you google pictures of the Sanriku coast, you would see many pictures of the strikingly dramatic sea cliffs or the pretty Jodogahama Beach in gorgeous weather with the blue Pacific ranging from a dark deep blue to a turquoise clarity under sunny skies. But seeing the Sanriku Coast in all its rainy, windswept broodiness, brings forth drama and a tinge of sadness – especially when you know how the coast, and many of its townships and villages were hit by the tsunami. So no, we were privileged to see the Sanriku Coast quite differently – with all its angry frothy waves, its cliffs obscured by mist and rain. And we loved it.

The plan was to travel from Morioka to Miyako and then go north before we ended the day at Hachinohe.

We started our journey from Morioka where we rented a car from the very convenient JR Rent-a-Car right at Morioka station. Not off to a good start when the English GPS did not work and all instructions were in Japanese. We gave up, turned on the portable wifi and relied on good ol Google Maps.

The ride from Morioka to Miyako took us slightly more than 2 hours, passing small villages, rivers, farmland and lots of forested hills. What I knew of Miyako came from horrific videos of black water seeping over the sea wall defences and sweeping into the streets, taking cars and boats and houses. Back then Miyako had been known for its tall sea walls built at a height of about 10m, higher than usual. Unfortunately because of the quake preceding the tsunami, the ground had sunk and as a result, the wall was no deterrent to the waves that rushed in.

First stop in Miyako was the lovely Jodogahama Beach. Start at the Visitor Centre which gives a good overview of the entire Sanriku Coast. There is also an exhibition area which gives some information on the tsunami. The Centre is perched high above the waterline but there is a path and wooden walkway that brings you down to the water front. From there, it’s an easy 10 minute stroll to the actual pebbly Jodogahama Beach, which literally means Pure Land Beach, referencing the Buddhist concept of paradise.

The waterfront path from the visitor centre to the actual Jodogahama Beach.

Once at the beach, you may tempted to take home a pebble or two as a keepsake (I know I was!) But don’t. There are signs telling you not to; so do respect the space. Not sure if this operates the same way as Hawaii’s famed Kilauea National Park where it is said that those who picked stones from the volcano area as keepsakes met with so much bad juju they returned all the rocks they took home. Best to just admire the rocky beach, the seagulls, take all the pictures you want and leave in peace.

We stopped for lunch at the Jodogahama Beach rest house, a simple cafeteria where you can have yummy kaisen-don while smirking at the hungry seagulls waiting just beyond the glass wall. That day, maybe because of the rain, we were the only ones in the cafeteria.

Rain also means nice low-lying clouds which thread through the hills and cliffs.

On a finer day, you could paddle a swan out into the calm waters of the bay.

From Jodogahama Beach we drove north-east towards Taro. Taro was badly hit by the tsunami, another place where the 10m tall seawalls failed to keep the town safe. Today, there is a lot of reconstruction still going on in Taro. The former Taro Kanko Hotel on the outskirts of town is left as it is, the first three floors decimated to skeletal steel pillars as the waters rose and smashed everything in its path.

In the middle of nowhere, the Taro Kanko hotel sits; a sobering reminder of the devastation left by the waves.

Visitors can visit the hotel on a special tours from Miyako. It was a sobering sight to see the hotel, left forlorn amid empty land lots slightly overgrown with weeds. There is a tall sea wall being rebuilt, this time much higher than 10m. In fact all around the coast we saw these tall fortifications being built, each with massive doors to keep the waters out.

The new town is set further back from the coast and a new towering sea wall is in construction.

The Sanriku coast is one of Japan’s most beautiful coastlines. Known for its dramatic tall sea cliffs dotted with pines, fishing hamlets, and some of the freshest seafood in Japan, it was one of the highlights of our trip. From Taro, we took a tiny road that wended up into the hills. It was so narrow that we wondered if this was a one-way carriageway. The road took us to a lookout point where we left the car (in lashing rain) to see this: 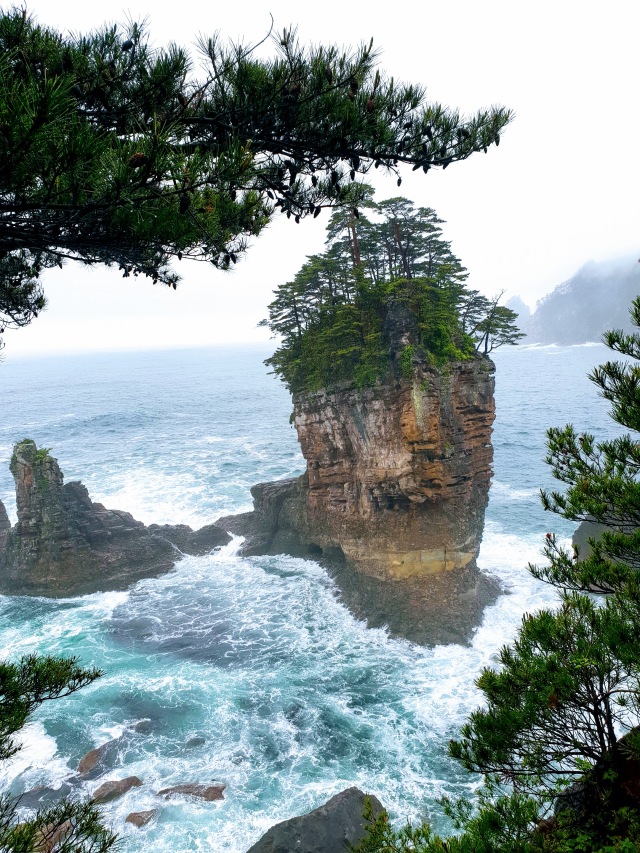 We were glad we braved the rain, down the slick narrow steps to the lookout point to see this majestic pillar rising out of the waves.

Simply breathtaking. This is the Sannoiwa Rock.  The views out into the churning Pacific hundreds of feet below were marvelous. We were the only ones there and despite the rain, took our time to really admire the jaw-dropping scenery.

On our drive northwards, there would have been numerous opportunities to stop – for the region’s salt-based ice-cream at Noda, the turn-off to the Ryusendo cave at Iwaizumi, yet another tantalising uni (sea urchin) kaisen-don near Horinai etc. But unfortunately, we could not due to the lack of time. This region is vast and to uncover all its goodies, you seriously need to take a couple of days, best with a car.

The Sanriku coast is connected by a scenic coastal train route from Miyako to Hachinohe. And only recently, the final connection between Miyako further south by train is also possible after all the post-tsunami reconstruction. But note that the local trains are not that frequent so the best option is to have the flexibility of your own set of wheels, and enough time to just detour anywhere you choose.

Our next lookout was the Kitayamazaki lookout. We didn’t like this as much as the one near Taro. The view was not as impressive and when we saw the tour bus disgorging the busload of tourists, we made a quick getaway. But in case you want to see what we saw that day, here it is:

As I wrote earlier, the coastal drive brought us to many small villages, looking mostly new with many constructing thick and tall walls to keep future tsunamis at bay. We passed a park, set further back from the beach which still had a section of the old sea wall, crumbled and battered by the tsunami:

With fishing being a key industry in this part of Japan, it seems like there is really a love-hate relationship going on where people need to depend on the sea for a livelihood but yet live on a knife-edge for the next big waves to come rolling in. In earthquake-prone Japan, the tsunami is a reality and the need for solid fortification and protection must be balanced with the practicalities of the fishing industry. The inhabitants of the coast have to learn to live with the sea and all its potential for harvest and destruction. Here, we saw villages and towns shifted further inland, mostly built on higher ground, sea walls built for protection, almost like mini fortresses.

One example of a massive door and look at the depth of the wall.

Further up the coast, we came across a particularly nice stretch where the road runs parallel to the beach. Despite living on an island my whole life, I have never seen the power of the sea upclose. And that day, on that road, seeing the white waves crash onto the rocky shore, I could only begin to guess at the power the sea has. It is awe-inspiring in its rawness; primeval, beautiful and frightening.

Near Hachinohe, and almost at the end of our journey, we stopped at the wide open seaside meadow of the Tanesashi Coast. This was probably the only time I wished it wasn’t raining so we could just sprawl all over the grass of this meadow while checking out the sea.

With clear skies, the Tanesashi Coast would have been a nice place to see the sunset. 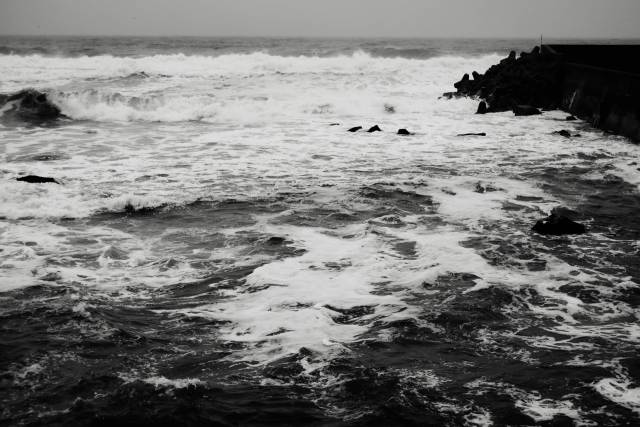 Another view of the stormy sea at Tanesashi Coast.

By the time we reached the Tanesashi coast, it was close to 6pm where we planned to have our dinner at this little restaurant about 10 minutes away from the meadow. The Kofunato Shokudo had come up in our explorations of Google maps pre-trip and the yummy pictures of generous kaisen-don amid the romantic setting of an old  wooden house perched on rocks is hard to resist. We were looking forward to this but alas, it was not to be. The restaurant was closed! We had googled its opening times just to be sure we wouldn’t miss it, but sadly, for some unknown reason, it was shut for the day. But just to show you how dramatic its setting is, check this out:

Closed and scuppered! There goes our plan to have a nice kaisendon dinner with that view!

By then it was night and we managed to find another conveyor belt sushi place in the Hachinohe suburbs which wasn’t half bad (no such thing as bad sushi in Japan anyway!) so we were a tiny bit appeased, but still disappointed. Guess it just means we gotta go back!

Leaving you with one last look at the Sanriku coast, near Jodogahama beach: