China travel: a checklist of essentials

Travel in China is always a learning journey. Despite several trips to China, there’s still always something new to learn. This time, it’s learning how we can go cashless like the Chinese. Everytime I see them whipping out their phones and transacting I marvel – they make it look so fast and easy. And it is – that is, unless you’re a foreigner like me. This trip we experimented with Alipay’s newly minted cash-free option for foreign travelers – Tour Pass. Communication-wise, we also bought SIM cards from vendors in Singapore to use in China to see how and if it would work to get us connected to the world beyond China. We also tried buying a VPN subscription to see if that could get us past the firewalls. To get from point to point, we traveled by a combination of train and car. Train travel in China has also evolved quite quickly in the direction of paper-less travel, making connections seamless even for foreigners.

Yunnan is vast and quite a fair bit of time is needed to cover long distances. The highspeed rail network at the moment is limited to the key Lijiang-Dali-Kunming route so if you’re planning to travel beyond this, your only options are bus or car. Or the very slow trains. And since self-drive travel is difficult to arrange, if not impossible, for the casual visitor at this point, you’re going to have to hire a driver and a car. The question is, how do you pick the right driver, how do you communicate, how can you be assured it’s not a scam and so on. We had all those questions in trying to arrange for travel in Yunnan.

It’s getting easier and easier to travel in China with their ever-expanding network of bullet trains that connect cities. The bullet train cuts travel time significantly, is not expensive and has evolved into a regular form of inter-city transport for most Chinese with slowest trains now servicing more rural connections.

Buying tickets is easy. I used Klook and Trip.com successfully. Be smart and stretch your returns by getting some cashback while you’re at it too. I use Rebatemango.com because they have been very quick to credit my points back into my account. They also have a wide range of travel partners for air tickets and accommodation eg the usual suspects from Booking.com or Agoda which I usually use – all of which makes point accumulation a breeze. From the Rebatemango site, I go into the Klook and Trip.com sites and make my transactions there.

Note that train tickets go on sale only a month before the date of travel so you can’t book them too far in advance. And don’t panic (like I did) when sales opened and the system showed all tickets ‘sold out’. For some weird unknown reason, the system sometimes releases tickets in batches so just wait a day or two and try again.

China trains are increasingly ticket-less. So all you need to do is to fill in your name and passport number correctly, show up at the station, produce your passport and you’re through. Easy as that. Not so long ago in March 2019, I still had to head to a ticket counter to exchange my e-vouchers for actual paper tickets – but not any more. It just makes train travel that much more seamless – something we don’t get even in Japan where paper tickets and paper reservation slips still need to be produced.

Go early though because security is super-tight. All bags pass through scanner machines and armed police presence is very heavy. Possibly because Kunming train station was the target of a very bloody terrorist attack not so long ago.

Train travel covers the important legs for visitors from Kunming to Dali and to Lijiang. But unfortunately no trains go as far as Yuanyang to the rice terraces, so if that is your itinerary, you would also need to hire a car and driver. Or go by public bus. We chose to hire a car and driver instead of taking the 7-hour bus journey. How we did so and what we learned will be shared in another post.

The fact that China is streets ahead of the world in cashless transactions also means we’re either going to have to carry loads of cash or learn how we can use payment apps like Alipay to manage.

For the longest time, it was not possible for foreigners to use WeChat Pay or Alipay to make cashless transactions. So we all had to carry around wads of cash, but not quite feeling like a king. I was a little luckier because in November 2019, Alipay announced the launch of Tour Pass. And WeChat followed quickly by allowing foreign credit cards to be linked to the app.

I tried setting up WeChat Pay but found the process difficult and onerous. Gave up quickly with that and also read online that the WeChat system is still having some teething issues. WeChat also makes it difficult because not all of the entire process is in English, unlike Alipay.

Alipay was a breeze. First, download the Alipay app. Look out for the Tour Pass icon and simply follow the instructions which are all in English. They make it easy to just link your credit card to a temporary Bank of Shanghai ‘holding’ account which acts like a wallet. So you can top up the wallet with various amounts up to a RMB2000 limit each time. You can keep topping up to a maximum of RMB5000. Any amount left unspent in the wallet will be refunded to your credit card after 90 days. To me, this RMB5000 limit is the only drawback of the Tour Pass. Because once you realise how easy it is to pay for something with just a scan of a barcode or a QR code, you wish you could use this to pay for everything, even the bigger ticket items like hotel stays, but that would wipe out the RMB5000 credit limit really fast. So go cashless for small buys and use your credit card for the big expenses like hotels.

Still, for a cashless noob like me, you can imagine how thrilled I was to just scan and pay. Yes, effortlessly for even the smallest transactions of RMB10. I paid for most purchases like this. Purchasing strawberries and oranges from fruit vendors by the side of a road was through Alipay. TCM medication from a Chinese traditional pharmacy? Alipay. The only time I could not use Alipay was in a taxi. When I asked, the driver drawled, “WeChat is more common. I don’t have Alipay.” Oh well.

In the end, I hardly used any of the cash I brought. And when I ran low, it was easy to keep topping up even when I was on the move. Mobile data made that easy.

And speaking of mobile data…

The Chinese do everything on the apps and hence, mobile data coverage in China is everywhere and it’s fast. To access that, we bought a China/HK Unicom SIM card. We bought a 15-day 7GB unlimited data SIM for SGD$14. The SIM card allowed us to bypass the firewalls so accessing Facebook, Instagram etc was no problem. 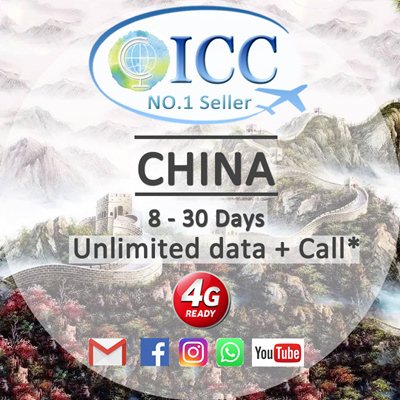 We bought this online via qoo10.com and simply picked it up at the store a few days before we left. If you bust the 7GB limit you can still use data, just at slower speeds. Buy the SIM card online – postal delivery is free but if you’re short on time, pick up the SIM card at the shop at Sim Lim Tower. We found a long snaking queue when we went to pick up the SIM card – the queue was for those who wanted to buy this on the spot. For those of us who had bought online, collection was easy and fast, no need to queue.

Download WeChat early because you will need it to communicate with the drivers and with the hotels in China. We found it immensely useful. So this trip, not only could we communicate fuss-free in China via WeChat, we could also still text each other and update our posts on social media.

Leapfrogging the firewall with VPN

There are many VPN options available; some paid, some free. All will need to be downloaded into your devices before you go. This time, I subscribed to Express VPN, which is a paid platform while my son downloaded the app for Super VPN, which is free.

Express VPN was said to be superior but it totally did not work for me. For some reason, I could never connect on any of my devices with Express VPN, which was frustrating because I had already paid for the service. After a while, I gave up trying to connect with Express VPN and just used the free version of Super VPN which worked very efficiently.

Super VPN connected smoothly and quickly. Sure, the signals may drop after a while, but when it did, it was not difficult for us to just reconnect. The only mildly aggravating thing is that Super VPN came with ads but I was willing to put up with this as long as it could connected me easily – which it did.

Download WeChat, get a SIM card before you leave home – one that crosses the firewalls in China, load up your wallet in Alipay’s Tour Pass, and get a free VPN. Book your train tickets online and maximise your dollar by shopping for those via an online cashback site like RebateMango.com. And you’re all set for your adventure in China!

This entry was posted in China and tagged Yunnan. Bookmark the permalink.