Faded glories of Tuanshan and Jianshui 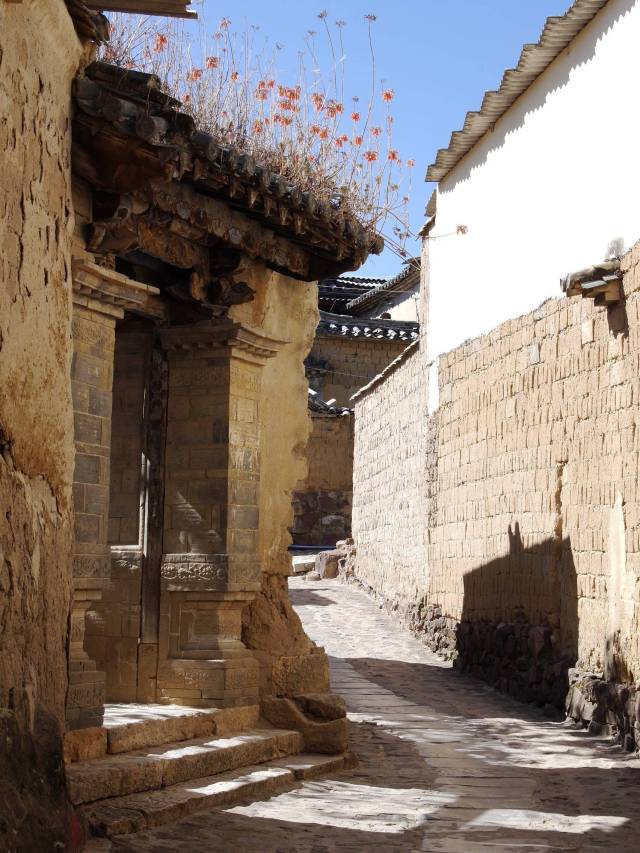 Yunnan is known for its tribal diversity but this far south, you can still find some Ming and Qing dynasty gems tucked away in the countryside. The tiny village of Tuanshan in particular, is a place where time has stayed still. People, largely the elderly, still live in the majestic houses off its tranquil cobblestoned lanes. I’ve been to some of  China’s most picturesque old villages in Jiangxi, Anhui and Jiangsu. But little Tuanshan can certainly hold its own. Unlike some villages where the tourism machine has completely taken over, Tuanshan remains unassuming, its beauty lying in the fact that it is still, at its core, a lived in space, occupied by a real community. And here, life quietly goes on, pretty much as it has for hundreds of years. 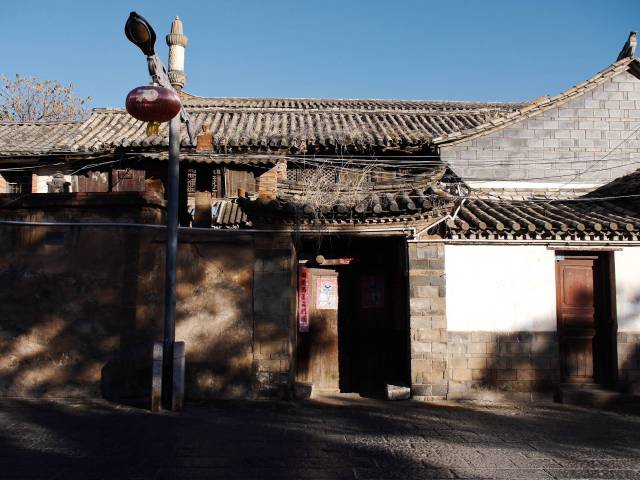 old house on Lin’an Road in the heart of Jianshui

After leaving the rice terraces of Yuanyang, we broke the 7-hour ride back to Kunming with a night in Jianshui, about three hours away from Yuanyang. Jianshui is a new town with a historic old core. Or rather, Jianshui is an old town which has grown to include some modern suburbs but still maintains its historic core. If you’re heading there, that would be the place to stay.

Well known as a education hub even hundreds of years ago, Jianshui is famed for producing many imperial scholars. Its success rate in the imperial exam system saw many families placing their trust in the schools in the town, sending their sons to be educated here.

A lot of guidebooks sing Jianshui’s praises but I did not find it that attractive. Its singular attraction is the Tiananmen lookalike of Chaoyang Gate. Standing solid and proud (in a traffic circle!), the gate is the only remnant of the city’s former fortified wall. 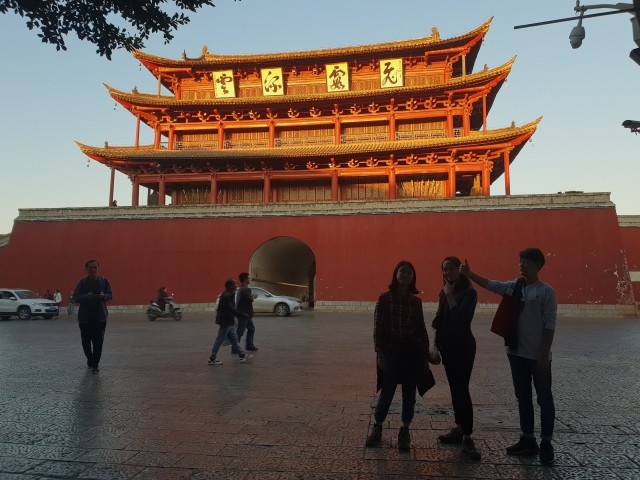 This has guarded the old town since the Ming dynasty and today, although it is encircled by a traffic circle, there is a wide open space where residents gather to chill in the evenings (if you’re lucky, you might be treated to impromptu singing performances! A lady with an amp and a mic was singing old folk favourites in clear soprano with an audience of five impressed old men) Note that when crossing the roads to get to the gate, just walk without hesitation; the cars will look out for you. Your hesitation in second-guessing the traffic will only confuse the drivers and result in lots of impatient horns blaring.

The old town itself is not big but certainly the roads have been refurbished, giving the town a more polished feel. It looks a lot like the Qianmen district of Beijing.

We stayed in a house called Sukongsang, booked via Trip.com. This is a charming four-bedroom narrow house that is tastefully done up; tucked away in a quiet lane off the main Lin’an Road thoroughfare. The owner deals in tea and has a little showroom/teahouse in the house next door. Sukongsang’s bonus is that overlooks the large pond in the Temple of Literature which is right next door.

So while I didn’t have the feels for Jianshui, to be fair, it wasn’t as if Jianshui lacked any key sights – there was the Temple of Literature, Jianshui’s famed tofu workshops and many working wells dotted around the old town etc but we gave them all a miss. Partly because we only had a night there and not much time to explore. But also because KH had fallen ill with the flu and he needed a doctor. While the kids went for a walk on their own, we went in search of a doctor and found one at Lin’an Road.

I’m not sure if this is a traditional medicine practitioner or one trained in western medicine, probably a mix of both, but it was interesting to see how the doctor consultation went. First, everything was done in the open – the waiting room and consultation  and pharmacy was in the main shopfront. The back of the property had a courtyard and around it were rooms where patients on drips were resting. It was a mix of new and old school – the doctor used glass mercury thermometers and also new automated blood pressure monitors. The doctor diagnosed him with a cold, prescribed some medication (all in Chinese!) and off we went. 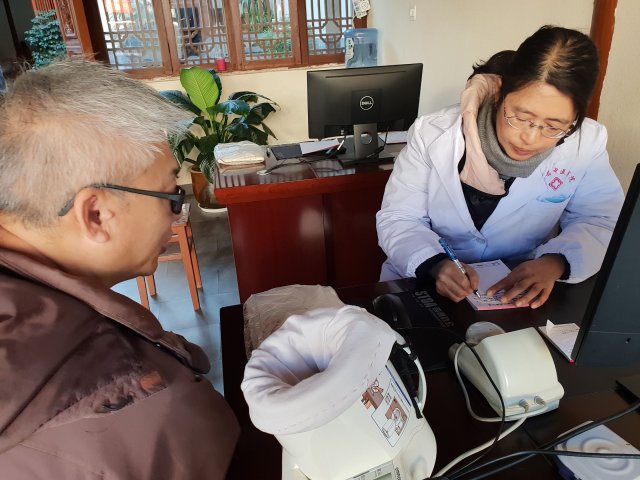 Jianshui was also memorable for us because of its breakfast. We were recommended this place at the west end of Lin’an Road, not far from our lodging. This place sold traditional Yunnan “over the bridge” noodles and is as authentic as you can get – filled with locals, all sitting at low tables, elbow to elbow, slurping up steaming bowls of noodles, menus all in Chinese pasted on the walls, with an unusual system of ordering. You basically go up to the glassed up area, order the soup of your choice. It comes out super hot, filled to the brim in a huge bowl. No noodles inside because you cook your own noodles at a small sideboard overflowing with sauces and condiments. You can imagine how bewildered we are to navigate this system. 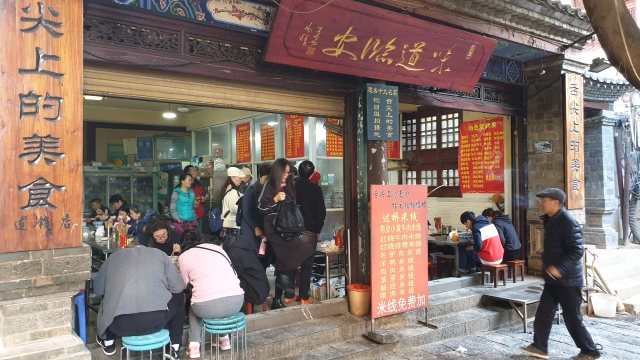 There are few choices of noodles (white rice noodles or the healthier Yunnan red rice noodles) which you select and then dunk into a boiling pot of water for a few minutes before taking them out and dropping them into your huge bowl of soup. Then add the condiments for kick – garlic, chives, chilli, chilli oil, soya sauce and more. To our delight there was also free flow of duck’s blood – just take all you need! 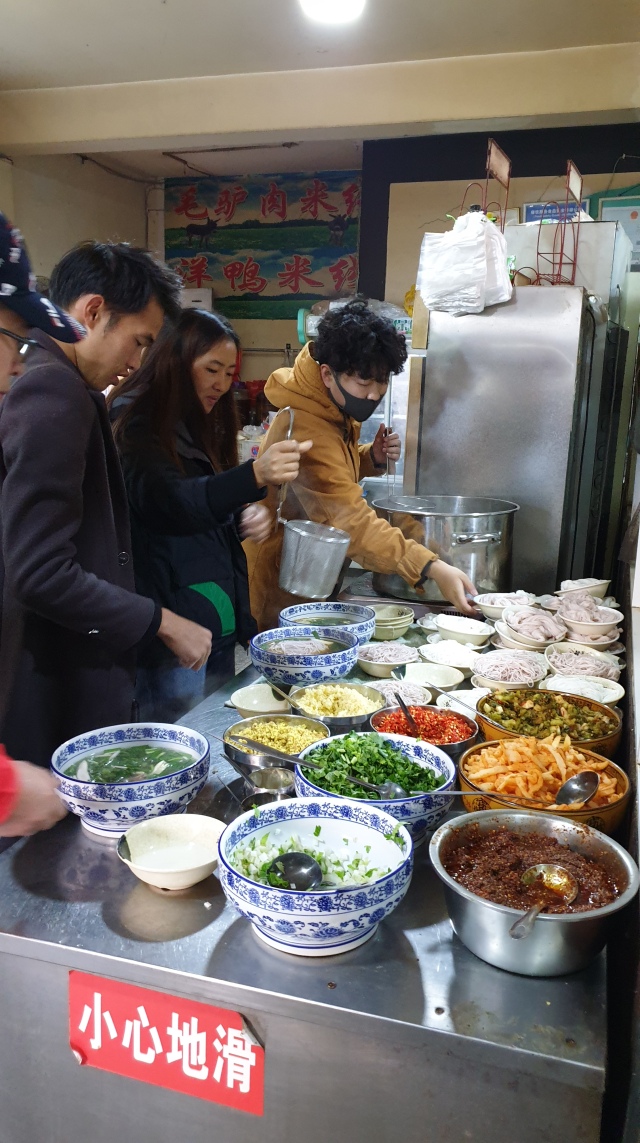 All this is happening in a tight space with people jostling you impatiently, while you try to make sense of the flow, add the stuff you like and then carry the super-heavy bowl of boiling soup and noodles while scanning for the nearest available table space. No time to be fussy and finicky – just drop the bowl on the table, and the occupants will make space for you. Ignore the icky floor; slippery with bits of noodle, veg, soiled tissue paper. We didn’t know the chilli was so lethal and ambitiously ladled extra for our bowls which resulted in lots of tears and red cheeks. Thankfully the friendly waitress saw our distress and whisked my daughter’s noodles off for a good wash with fresh soup. Each bowl was generously portioned and roughly cost us 10yuan each. Free noodle refill if you have a big appetite, making this little place really value for money for delicious and authentic noodles.

Near Jianshui is the much-vaunted Double Dragon Bridge which every tourist goes to see. Yes, it is an authentic Qing era bridge but it is weird to see this magnificent bridge literally straddling a… pond! What used to be a fast-flowing river was blocked at both ends and rechannelled to manage seasonal floods, leaving the Double-Dragon Bridge quite a forlorn bridge to nowhere. Here’s a picture of the bridge with its impressive 17 arches. 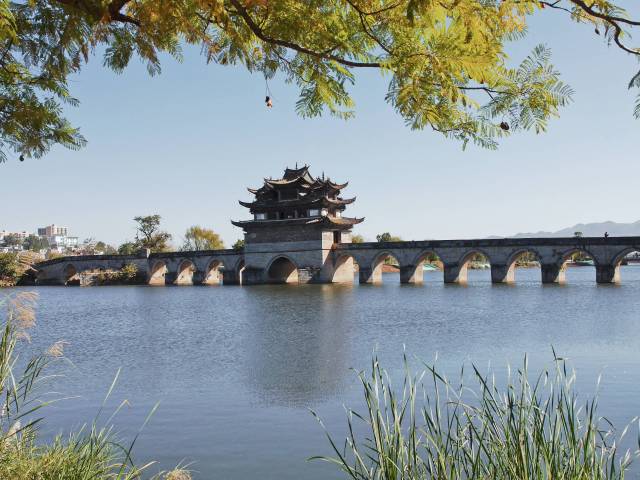 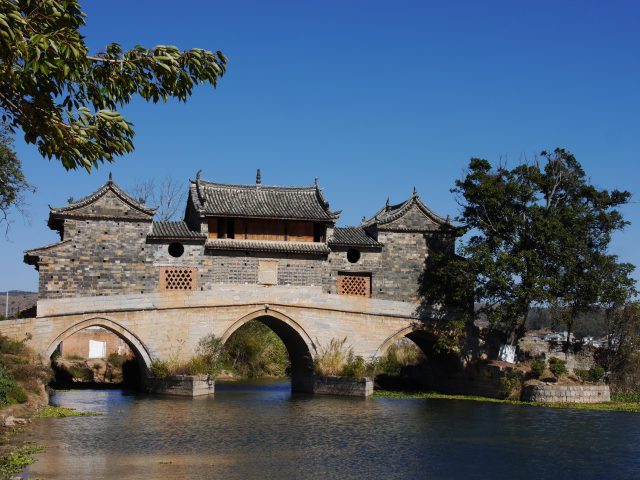 This is not far from the small village of Tuanshan. This little village’s inhabitants largely shared the same surname of Zhang. We had to pay a small entry fee to get in but this came with a guide who brought us around. One of the main attractions is the Zhang family courtyard. This sprawling courtyard once housed the commandant of the area and his family, its tall walls hiding several courtyards with cunning little slots for gunfire fortification. 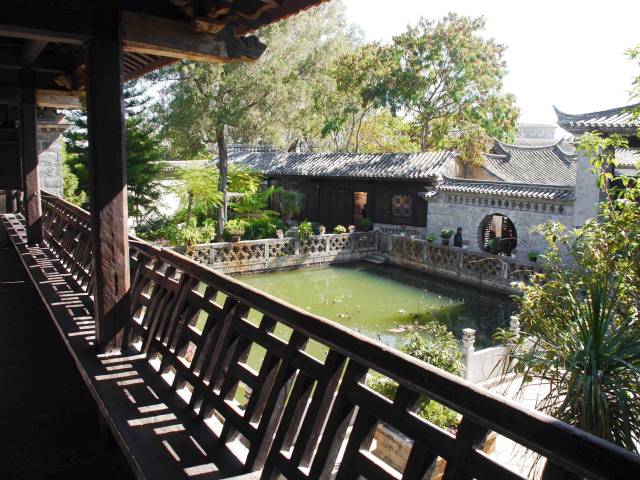 The boys’ study and school room overlooked a pond which in summer would be filled with blooming lotus flowers.

Leafy and cool, the central courtyard houses the schoolroom and study for the sons in the family while the daughters resided in the opposite wing. Loved the architectural details in this old house with elaborate carvings in the eaves and lintels. Constructed in the old ways of interlocking beams without the use of nails, each carving carried centuries of Confucian teaching, folklore and cultural references. Look beyond the fading paint to see the details and the Chinese fondness for symbolic meaning. Since this is Yunnan, so far south and open to other cultural influences, you see some delightful elephants amidst the usual phoenixes and dragons. And spot the ‘vases’ with the play on the phrase “ping ping an an” denoting peace and tranquility; as if to say that familial harmony will be instrumental in upholding the roof of the family home. 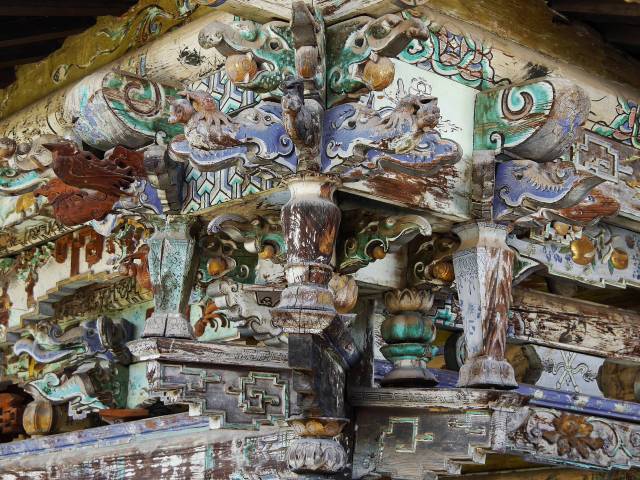 This magnificent house was converted into a neighbourhood school in the early 1900s with the fall of the Qing and later, during the Cultural Revolution, was sub-divided into smaller apartments in the re-distribution of wealth/property. Some of the carvings which featured human figurines were not spared by the Red Guards, having their faces and features shaved off and mutilated. The re-proportioning of the property stands to this day with courtyards and houses shared by different families. So it is lived in, yes, but painful to see the condition: 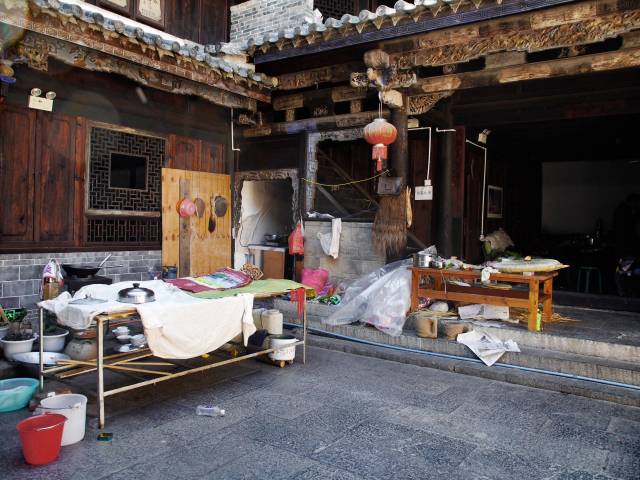 We enjoyed walking through the old village. It was very quiet with hardly any visitors, just residents going about their business. This group of oldies just chilling in a small square under a shady tree over a game of cards is one of my favourite sights: 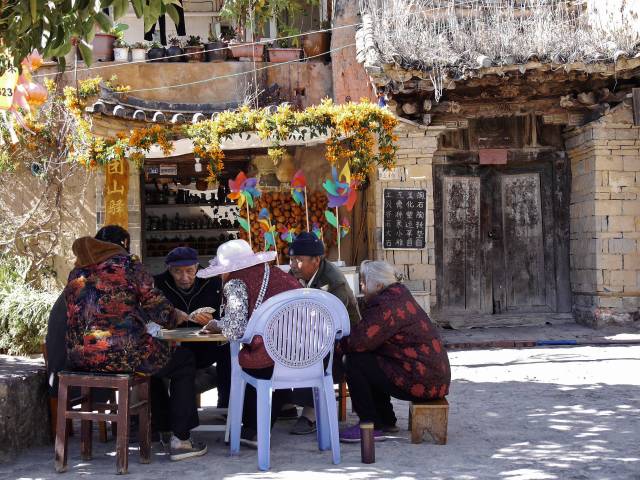 one of my retirement goals

So while this place charges a small entry fee, it is not overly commercial – no eateries and lodgings if any, were within family homes. There is nothing shiny, new or spruced up for the tourist dollar. The creamy faded walls have stood stolidly amid so much change over the centuries and charmingly, many its roofs commonly sprouted flowers! The glare of the sun, the brilliance of the flowers and the many cacti gave the place a bit of wild west vibes. 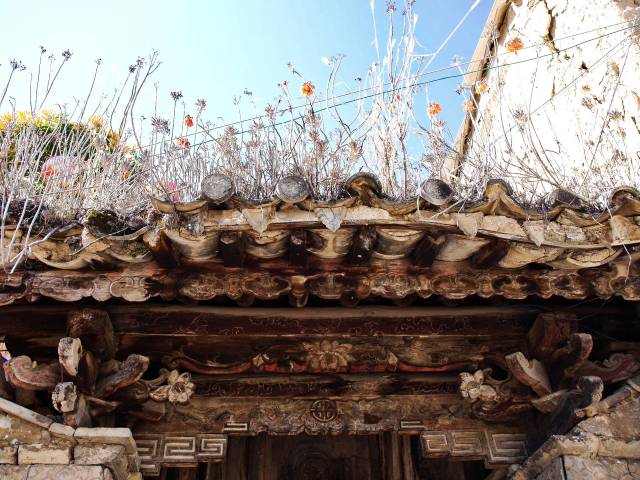 As with many villages in China, its walls were dotted with occasional Communist slogans exhorting its inhabitants on national pride and the desired law-abiding mindset and behaviour to cultivate. Like this grocery store: And sometimes watched over by the door gods: 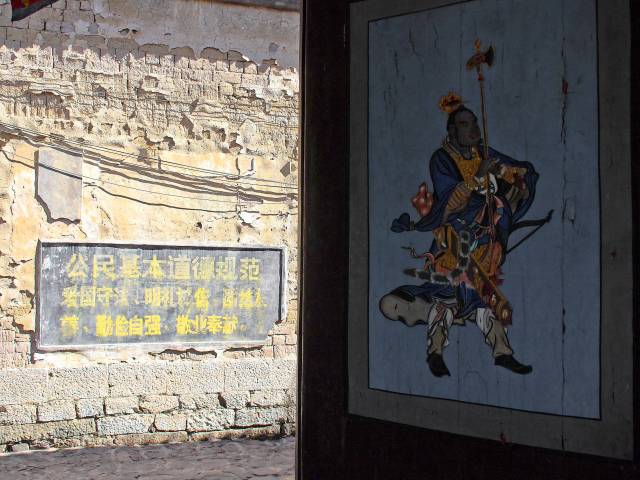 The last stop of our ‘tour’ was the former village chief’s home. He still lives there. And if your Mandarin is up to it, engage him in conversation. For those who want to stay awhile, he offers lodging too. What can be nicer than a few nights in an authentic mansion in the heart of an old village deep in the countryside?

Tuanshan is a place I would not mind spending some quiet days in. We left Tuanshan late in the afternoon and took the highway back to Kunming. This ends the first leg of our journey in the south of Yunnan. 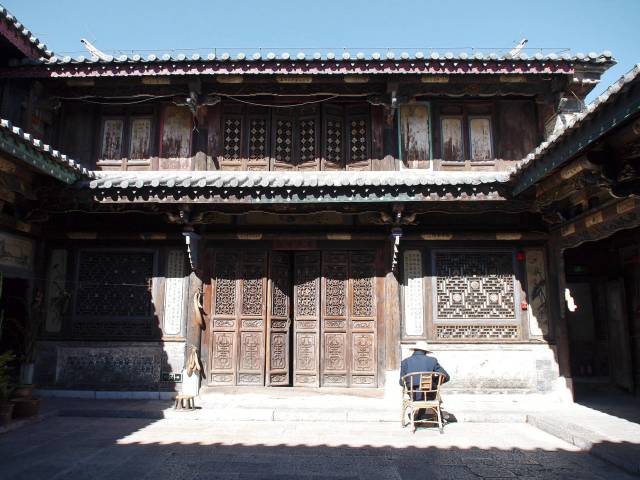 The elderly former village chief basking in the sun

This entry was posted in China and tagged Jianshui, Tuanshan, Yunnan. Bookmark the permalink.