In the shadow of the Cangshan mountain range, by the placid shores of Erhai lake, Dali has long attracted travelers. For some time, its reputation for being a laidback backpacker magnet drew crowds who liked its chill, foreigner-friendly vibes. Certainly today, it is still a draw – if you like crowds and retail therapy in what is now a pristinely renovated core that is more mall than village. Dali has lost its old town feel. Chock a block with bars, shops, restaurants and hotels, Dali is for me a cautionary tale in the commercialisation of China’s old villages. Contrary as this may sound, Dali is still worth a stay – not extended – but enough to cover the gems dotted around the countryside nearby.

We left Kunming around 8am, bidding farewell to the really nice Mr Xie, our driver for the southern leg of our Yunnan trip. Xie picked us up and drove us to the Kunming station. We tried to tip him but he wouldn’t hear it, giving us big grins, bear hugs and waves before driving off. If you want a reliable driver in Yunnan, I could not recommend anyone better. Just drop me a request in the comment section with a contact email and I will send you his WeChat number.

The bullet train whisked us to Dali in roughly two hours. We were met at the station by our second driver for the trip – Mr Zhang. Zhang drove a spanking new 14-seater but that really is about the only good thing I can say about him. Our first lunch with him should have given it away – you can smell ‘tourist trap’ when we were ushered into a dinky private room with staff dressed as traditional dancers and an English menu.

We kept the day short because it was Christmas Eve and KH was really ill with a fever, fatigue and a cough. Even then, he insisted on ascending Cangshan. There are apparently three cable cars to bring you up the mountain range. But we were told that the uppermost cable car (Ximatan or Tianlong cable car) which would have brought us up to an alpine environment at close to 4000m was closed due to high winds. The driver brought us to the Gantong cable car instead, which we later realised was popular with tour groups.

The Gantong cable car ride took us high above the slopes, then across a deep valley. It was a bit scary when you realise how high up you were, suspended over long drop far below. The views surrounding Dali and Erhai were marvellous though:

patchwork fields around Dali with Erhai lake at the doorstep.

Okay there’s really nothing much to see/do up at the Gantong cableway so if you are short on time, the Ximatang cableway should be your priority and not the Gantong cableway. There was a grotto of sorts which was used as a shrine, popular with the crowds as people wrote on red wishing plaques and hung them up. So this is me being a bit biased – when in Japan, writing on ema tablets and hanging them up is something I look forward to. I do this at almost every temple I visit. But here in China, for some weird reason that I cannot articulate, I look askance at the same practice of writing on these plaques and think instead that these are again superstitious exploitative actions. Can’t explain it.

Half the family decided to hike up to see the gorge but lazy me decided to stay behind to check out the giant chessboard. Probably had something to do with the sign that pointed in the direction of the gorge with the helpful information that it was 200 stairs upwards. I decided to do the sane thing and hang out at the ginormous chessboard, entertaining myself watching people try to move the chess pieces until they were red in the face. 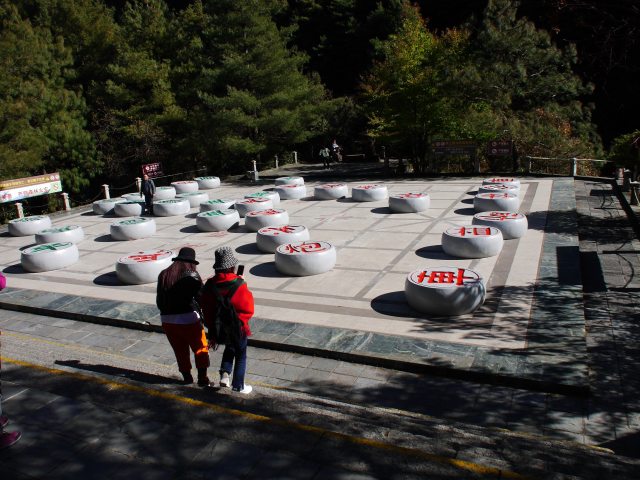 Later, there was an adorable little girl in pink who bossily ordered us to pose for her and her cute toy camera (which I later found out from her mom was actually a working camera!) She can’t have been more than all of five years old and she was already art directing the shoot like a boss. And we were strangers to her! 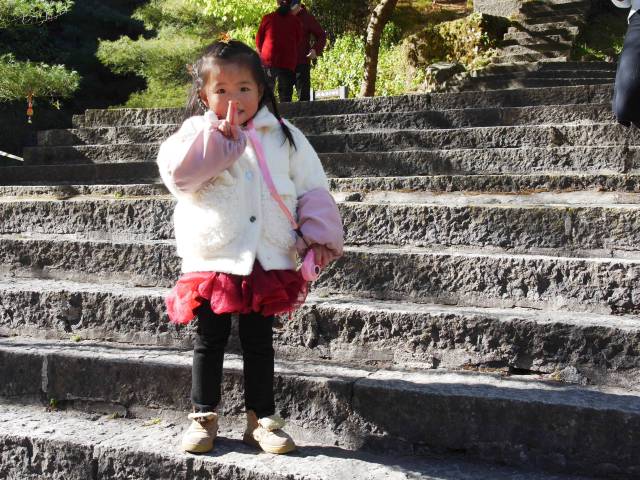 So Cangshan itself was okay, no spectacular mountain vistas but perhaps we were not seeing it at its best. Next time I go back to Yunnan (and I am fairly certain I will), the Ximatang cableway will be high on the list.

This being Christmas Eve, I decided to treat the family to a night at the swishest resort on the Dali plains – the Hilton resort on the slopes of the Cangshan mountains. 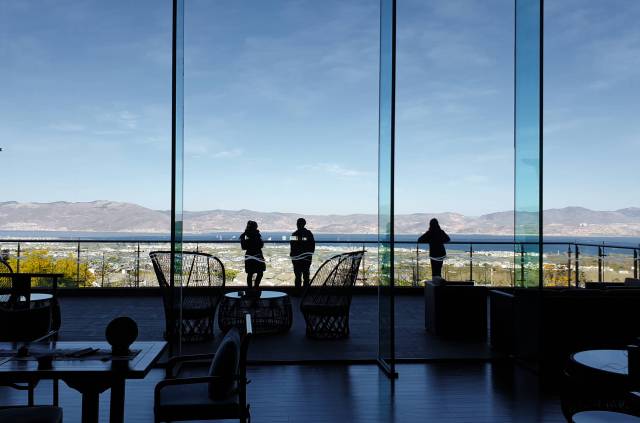 The next day we checked out and spent the day in two of Dali environ’s most under-rated gems, so much so they each deserve separate posts of their own which I will get to.

We made Dali old town our base for the next two nights. We stayed in this delightful little inn run by a young trio of siblings. The Dali Yunxi Boutique Inn is hands-down one of my favourite places to stay this trip. Top spot is reserved for the sterling Bivou in Lijiang but more on that later. The Yunxi inn was spotless and truly value for money (we took four rooms for three nights and it cost us HALF of what we spent at the Hilton). The rooms came with breakfast, bonus points for the resident doggo and a trio of adorable kittens. Best of all, each room came differently but tastefully furnished.

The young owners and team were friendly and so warm. While Mandarin is not an issue for me, it was nice to know that the Yunxi team spoke English; instructions for wifi, security locks, house rules etc were in English. When we had trouble with our driver coming in, they took over and gave him clear instructions. When we needed to know if the Ximatang cableway was okay to ascend for a second attempt to get to the top of Cangshan, the team readily called the cableway office to check.

The guesthouse is tucked away on the fringes of Dali’s old town quarter and initially this meant a long trek from the action but we were so glad it was – this meant we were further away from the throngs and the noise and the neon. From the rooftop lounge you could see Cangshan and right next door, Erhai city gate.

Don’t get me wrong, Dali can be a pleasant ‘city break’ if you’re tired of old villages, but certainly if you are looking for an authentic lived-in hub, this is not it. That said, Dali is worth maybe an afternoon or evening’s stroll.

Don’t miss the stunning Catholic church or otherwise known as the Dali Trinity Church. If you’re in town on Christmas Eve or any major Christian celebration, join the parishioners and you might be treated to some traditional dances and performances.

Looking like a cross between a temple and church, it was built in 1927 at the request of a French priest. Borrowing elements from Chinese tradition and Bai culture, the church is today recognised as an important monument in Yunnan. There is a grotto (as in most Catholic churches) dedicated to Our Lady of Lourdes, church offices and even a hostel around an adjacent courtyard. I would stay here if I weren’t so happy with the wonderful little Yunxi Inn.

Trinity church gave the impression it is a community space. Not sure if I am explaining this right – some churches are so modern and so pristine, architecturally sophisticated  but they lack the lived-in feel, a space where the community adds their own unique touches. The homely nativity scene, the glow-in the dark stars stuck on the ceiling, the buntings, the worn carpet, the painted walls – all speak not of sophistication but sincerity and belonging.

As a Catholic, I felt moved by this space – the simplicity of the altar, the tabernacle, the side altar for the Virgin – familiar and warm.

Of course in Dali old town, the rest is really just walking through, checking out the shops and eateries. We had fun making our own customised lippies in one shop. And in one section, the artificial streams added a picturesque touch.

Of course one of the key attractions in Dali is Chongsheng temple with the three pagodas, an scene typically representative of Dali. But to be honest, it is really not worth the time or money to walk through the sprawling grounds. It would be enough to see the pagodas from afar. Nevertheless, we did it so you don’t have to. Here’s a we’ve-been-there-done-that picture of the pagodas: 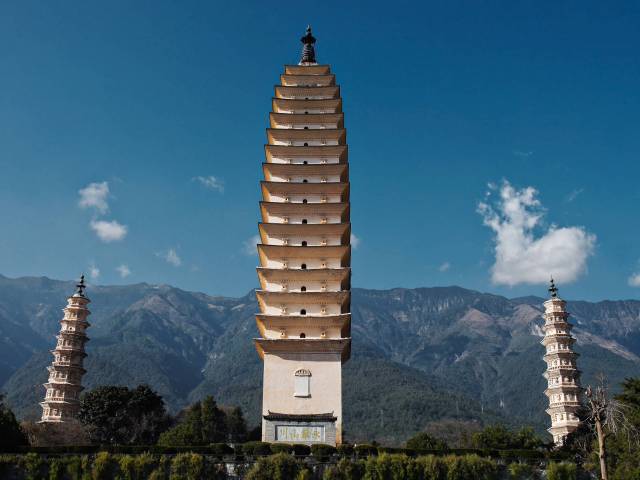 So there you have it folks. I have mixed feelings about Dali. Dali’s ancient town can no longer be called ‘ancient’. But Dali is worth a couple of nights, to check out Cangshan for a nice alpine hike, and day trips out to Weishan and Donglianhuacun – next few posts. And of course, not forgetting the lovely Xizhou, whose old heart still beats the way it did for centuries, making up for Dali’s loss in more ways than one.

This entry was posted in China and tagged Cangshan, Dali, Yunnan. Bookmark the permalink.

1 Response to Dali and Cangshan