Drugs, horses and tea in Donglianhua 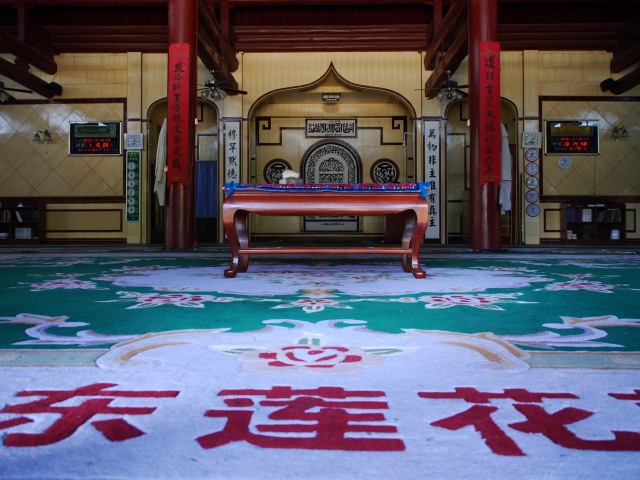 Nestled among the patchwork plains of Weishan county, over the Cangshan mountains an hour from Dali is a little-known gem off the main tourist trails in Yunnan – the small working village of Donglianhua. By now you know I have a thing for authentic small villages in China. Donglianhua is certainly that. But what makes this place a bit more special are its stories of wartime derring-do, a checkered past, a Mongolian lineage and its place as one of China’s Muslim villages.

Our driver got lost while trying to get to Donglianhua. But the first clues that we were headed in the right direction came when we noticed more and more women dressed with the hijab, typical of Muslim wear; a sign that we were likely quite near the village. Donglianhua is getting some attention in recent years with an influx of independent travelers. The busloads have not quite discovered it yet but in anticipation, the village built a large carpark with a new visitor centre, restaurants and shops. Move past all that and walk into the village.

It was yet another blue-sky day. At a small square  a few of us took a toilet break at the public toilet. As we waited, an old man watched us with interest. Bent over with age, he hobbled over to us and proudly told us he was a relative of one of the Ma brothers whose business helped place Donglianhua on the map. Gesturing to one of the tall walls of the square where we stood, he told us we should visit the house of Ma Ruji to get an overview of the brothers’ role in Donglianhua. Incidentally, most residents here in the village have the Ma family name.

Built around a central courtyard with one tall wall, Ma Ruji’s house was built in 1941, so it wasn’t very old but its scale reflected the wealth of its owner – with three wings, stables and even a watchtower. Climbing up the rickety wooden stairs to the topmost floor of the four-storey watch tower gives you a view of the grey tiled rooftops, the surrounding plains and the hills – useful for watchmen to detect any unusual activity. Each of the Ma brothers’ houses has watch towers. But Ma Ruji’s house and watchtower seems to be the best preserved.

The watchtowers are a rare feature in traditional Chinese houses. But this, with the gunslots, the design of the main entryway which allowed owners to ‘seal’ off a wing in the event of an attack all point to a design which facilitated defense. Not unusual when you realise the Ma brothers had made their fortune as horse traders and caravan drivers in the old Tea Horse trade route. The second world war also saw the brothers putting their caravans to good use as a supply route for the resistance against Japanese rule. But when the Communists took over after liberation, the brothers fled China and settled in Thailand where they continued to do well. Today some of the family are still here in Donglianhua village, while others remain in Thailand. Ma’s grand-daughter is one of those remaining in the village. She runs the small antique curios store in a corner of the house.

From the top of the watch tower at the Ma house, you can also spot the distinctive minaret for the village mosque. The people of Donglianhua descended from the Mongols. Back in the 13th century, when the Mongolian invasion took place, some troops settled here and some 700 years later, their descendents remain.

China’s diversity, particularly in Yunnan means that a significant slice of the population is Muslim and Yunnan has a sizeable share. Donglianhua is not the only Muslim enclave in these parts but it has one of the loveliest mosques. Built in the early Qing dynasty, the mosque is of course still in use today.

The compound of the mosque was empty when we walked in and the main hall was closed. Just as we were about to leave, an elderly man dashed up to us and offered to open the big hall for us to see. He was the imam. Already in his 70s but religious duties aside, he proudly says he takes care of the mosque, the compound and keeps it all spick and span. Just like his father before him.

The large Chaozhen Hall can hold about 1000 people at a time.

Eager to show us more, he opened up the exhibition area which told the story of Donglianhua’s Muslim culture and brought us around each exhibit, explaining each aspect of Muslim life proudly – marriage, birth, death, history, and a snapshot of all the mosques in Yunnan.

The minaret tower is a combination of Chinese design and Islamic culture with the crescent moon as a centrepiece. The fish symbols are there as a symbol of abundance and prevention of fire. From the tower, the Muslim call to prayer will echo across the countryside, a reminder to the community of the time to pray, an action repeated for centuries. 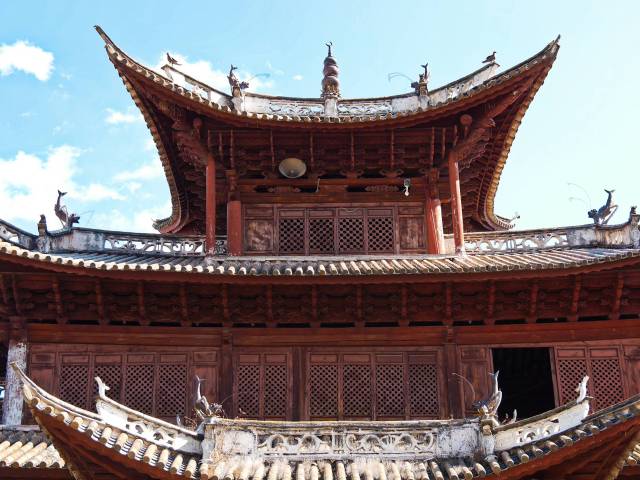 Ma Ruji’s house was the best preserved of the three brothers’. The others were still occupied but had fallen into some disrepair. Still, the details are beautiful to see. The paintwork is worn but the overall effect is graceful. The rest of Donglianhua is also worth walking through. It is not a big village so quite easily covered in about an hour or two.

One of the Ma brothers’ house which is today shared by different families and is not officially open to the public. But the people of Donglianhua, like the imam, have warm smiles and will welcome you if you ask nicely.

Some of the houses had livestock as well in makeshift stables. The horse caravan days have long gone from the time when most families in Donglianhua traded in horses. Most are farmers these day and as with most of China, the village is ageing with the younger people leaving for the bigger cities.

Donglianhua did not have an easy history. In the 80s and 90s, Donglianhua became a conduit for the drug trade as the old tea horse routes were used as a route to bring drugs into the country. Its proximity to the golden triangle near the Burmese border and the familiarity with a porous border through old horse routes made this easy. The army was called in to manage the situation and in 2009, the area was finally declared drug-free, but not before significant strife and violence.

Looking at the quiet, almost silent streets today, it is hard to imagine. In slightly over a hundred years, this little village morphed from its heyday as a humming hub in the tea trade to WW2 supply conduit and then to the 90s as an important satellite for drug traffic in the regon. For such a small village, Donghualian’s past was certainly much bigger than what one would expect.

Leaving with one last musing on the architectural details of the buildings. No doubt that many of the old buildings looked worse for wear and certainly the interiors have become so neglected as a hodge podge of uses take over what used to be stately mansions. But some of the details of some courtyard homes that remain can testify to the village’s wealthy and successful past. Like this for instance: 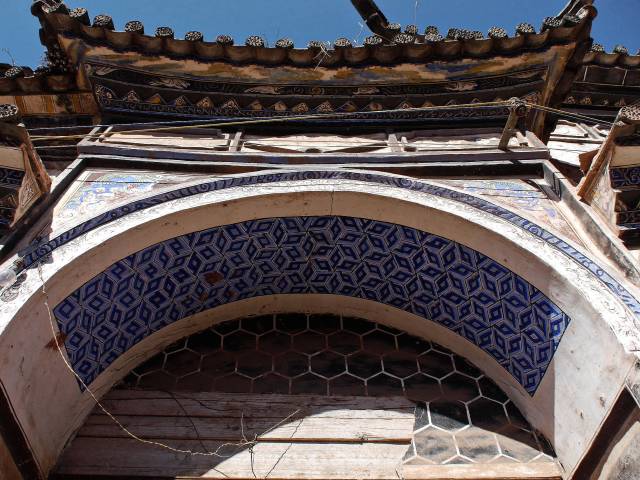 Details on doorways indicate how wealthy and powerful the owners of these homes were. Only the rich could afford the artisans who would painstakingly create these motifs.

This entry was posted in China and tagged Dali, Donglianhua, Yunnan. Bookmark the permalink.