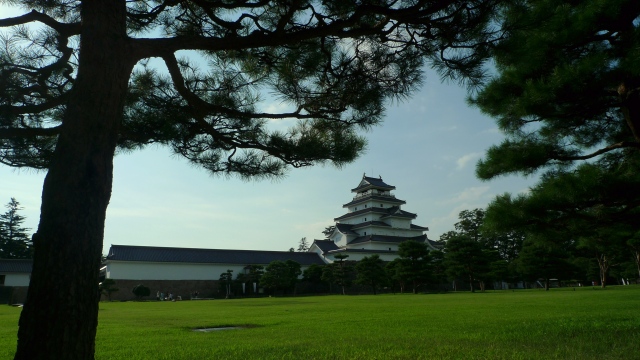 In Oct 1868, when the 20 young boys sequestered up in the hills above Aizu Wakamatsu saw the clouds of billowing smoke over this castle, they assumed all was lost. They believed their lord dead or captured and so made the decision to commit seppuku – ritual suicide by disembowelment. They were the White Tigers, a squad of young samurai all  16 years old or thereabouts, mere teenagers. Tragically, they were wrong – the castle had not yet fallen to enemy hands. At least not yet. But at that moment though, they made the decision to die with honour. All but one survived.

From the top of the castle looking at the hill where the boys killed themselves for a misinterpreted mistake, I thought how easy it can be to misread the signs, to make decisions based on emotion and hearsay and not fact. 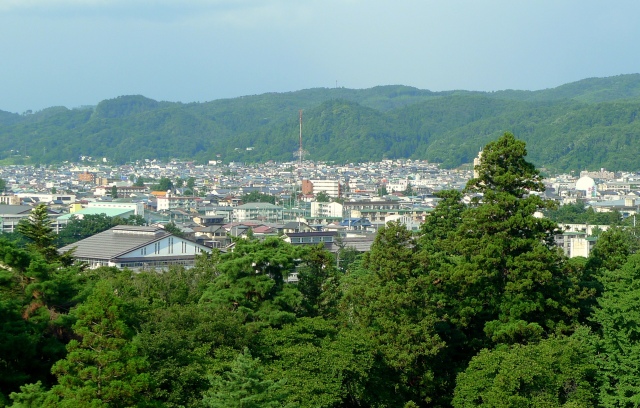 Since the nuclear accident in Fukushima, Japan has seen her tourist numbers fall dramatically and then slowly, gradually climb up. It has taken no small amount of time and quite a fair amount of effort to convince travelers that Japan is safe from the threat of radiation. The rumour-mongering on and off the web was (and unfortunately, still is in some quarters) rampant with hearsay and frightening stories.

This is a pity. Japan is a beautiful place. It is safe. Any radiation we receive from traveling on the ground anywhere in Japan, even in a shinkansen cutting through the affected Fukushima area is far less than the radiation we would have received in an airplane flying anywhere in the world.

You can choose to believe the drivel and the conspiracy theories. Or calm down and look at the facts. One thing is clear though, the people I met traveling through Tohoku, in Aizu Wakamatsu, have been hard hit by this irrational fear-mongering. Livelihoods and businesses need real support and patronage. We can send all the condolences and messages of support we like. But there’s nothing like walking the talk and actually traveling to the region, staying a while, soaking in the hotsprings and eating the produce.

I’ve done that – the first time within three weeks of the disaster to an eerily quiet and subdued Kansai, and then again, barely five months later to Tohoku itself. I haven’t grown an extra limb yet though my kids tell me I still have eyes at the back of my head!

What happened to the White Tigers in Oct 1868 was tragic. Misinformation cost them their lives. Today, it would be very sad if people still clung to fear and horror stories to cut Japan from their list of holiday destinations.

Aizu in particular, has so much to offer. Tsuruga castle may be a reconstructionbut those huge stones around the old moat, at the castle’s foundations, are impressively real. They have stood for centuries – the stories they could tell if they could speak! A walk around the leafy castle grounds is a pretty way to spend an afternoon. A shrine also sits within the park. 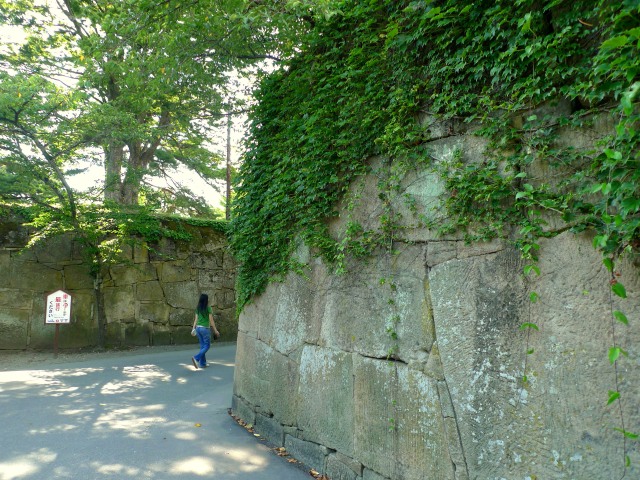 The castle grounds also hold the serene little Rinkaku teahouse where the lords used to have tea ceremonies. For a small sum, you could do the same today. 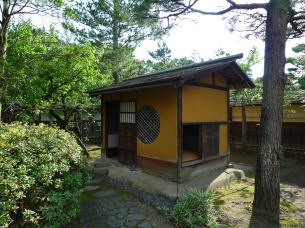 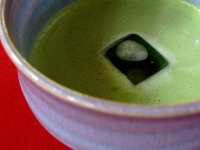 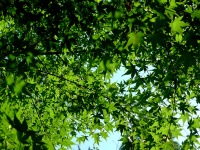 In the nearby visitor centre, I painted my own little Akabeko. For about 870yen, you could channel your inner Picasso to paint your own personal red cow and take it home. The story goes that the red cow was a symbol of good fortune and helped the people of Aizu avert a smallpox epidemic. The red cow comes with certain markings which you can follow to a T or just let your imagination flow – some of us drew daisies, hearts and stars etc on the cow! 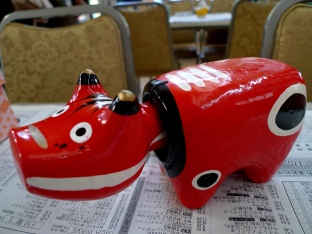 Just outside of Aizu Wakamatsu is Ashinomaki, a small hotspring town where we spent the night.

Straddling the Okawa river is a series of onsen ryokan complexes. Although the waters were discovered more than 1000 years ago, it was not until a road was constructed around 1902 that commercial onsen development actively started.

We stayed at the Ookawaso, a sprawling multi-story onsen hotel with about 110 rooms. The rooms were generously sized with fantastic views of the valley and the river. You could see swallows free-wheeling into space outside, swooping down into the river before swinging back up. 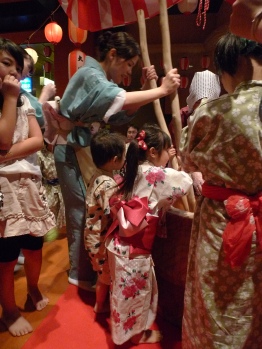 Dinner was a multi-course kaiseki meal of course. After dinner there was a mochi-making demo and guests were invited to join in the pounding. I was curious to see there were so many families with young children. The manager (a very cute Ken Watanabe lookalike!) explained that these were displaced families evacuated from the areas hit by the tsunami and the nuclear accident. They were waiting for government-built houses to be ready so that they could relocate. In the meantime, hotels like Ookawaso hosted them with the tab picked up by the government.  It was not a bad idea considering that occupancy was already very badly hit by the disasters. More importantly, it was a good thing to do for these families who have lost their homes. 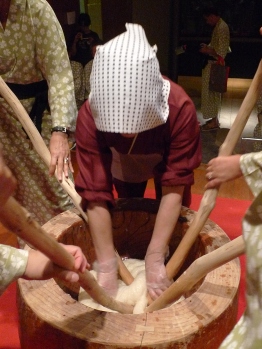 The mochi-making demo was lots of fun. We pounded the soft rice dough with long wooden poles while someone had to keep adding water a little at a time and then turn the dough – all in that split second when the poles where not coming down into the bowl. It was amazing how she had her timing down perfectly to avoid her hands getting smashed into a pulp!

With the boom of the drums and the bracing cries of encouragement from the enthusiastic audience and participants, it was easy to find a nice rhythm to pound the mochi – which we all enjoyed after the exercise!

The Ookawaso hotel is well-known for its ‘rice terrace’ rotemburo onsen pools which imitate the form of cascading rice terraces. Just pick a level and soak.

I learned the meaning of the usual onsen symbol: three spirals of steam rising from a dish. The first short squiggle means one short bath before dinner, then one longer refreshing bath after dinner and a final short third bath early in the morning before leaving. I didn’t have three baths this time because of the weather. I may love the onsen but it was in the middle of summer then and it was already muggy and hot. I didn’t fancy so many hot soaks in this weather.

So after dinner later in the night close to midnight, I ventured out to the baths hoping not to run into any familiar faces. Those who have read this blog and followed my trip to Yarimikan and its outdoor pools know that I am not squeamish about being naked. Stripping before family and total strangers is fine (the former knows your imperfections and you don’t really give a damn about the other) but the embarrassment meter goes up several notches when the group is right in the middle – newly familiar, these were fellow colleagues that nudged borders between friendship and a professional relationship.

Yet despite the late hour, I bumped into Michiko-san, our guide. Funnily enough, there was little awkwardness. There were only  two of us in the middle tier of the ‘rice terrace’ rotemburo. Conversation was kept to a minimum but there’s a sense of shared camaraderie about soaking together in a velvety bed of water and steam.

Later that night, snuggled deep into my futon, I thought about onsen in summer.

In autumn, winter and spring, the waters are invigorating, comforting, reviving as you shiver in the cold slowly lowering yourself into the heat. There’s even a sense of pain and satisfaction as the heat bites.

But in summer, when the days are hot and humid, I think I found it easier to get into the waters. I didn’t have to inch my way in. Perhaps the humidity of the night had already conditioned my skin and slipping into the heated water was not so much of a shock. In the semi-darkness, the heat waves shimmer across the dark slate floor of the rotemburo like light on mother-of-pearl. Listening to the cicadas creaking and feeling the hot water lap against the skin is almost hypnotic. After a while, the heat goes to the head. I found myself light-headed, heart beating faster, a little breathless. Sweat beads and trickles. No, summer onsen is not at all like onsen in the cooler seasons.

Summer onsen is lush, intense and sensual but I’m glad I got to experience it because now I’ve had a taste of onsen in all four seasons in Japan!