Posted on November 2, 2012 by chongbrood

This is a little-known gem in a quiet part of Malacca, away from the touristy scrum that is Mahkota, Jonker and the Stadthuys. This simple coffeeshop has a great location – right by the Malacca river – and great old-style Teochew porridge with some side dishes that are a throwback to my childhood when Singapore was far less sanitised than it is today and when hawker food had its former oomph, unrestrained by health or hygiene concerns. My parents found this place by chance on one of their visits to Malacca a few months ago. Even as they relished the food, they knew I was going to love it – the food and the location. And they were right. 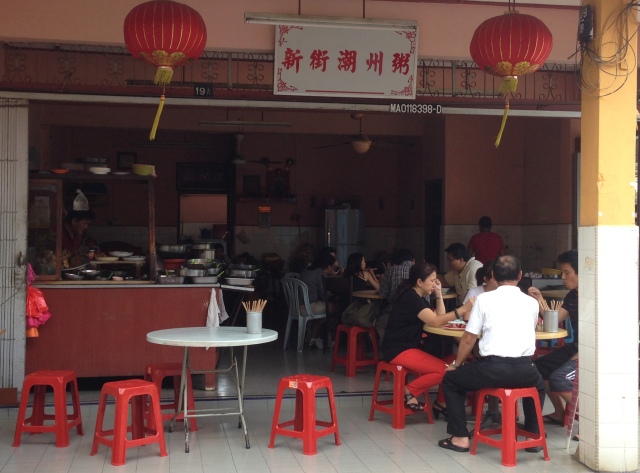 It’s not easy to find this place. My parents’ vague instructions were: Chinatown, riverside, next to bridge, small road. Off Jalan Bunga Raya, the main drag for Malacca’s Chinatown, there are several small single carriage lanes running off the left hand side. We missed the turn and took the larger more prominent Jalan Pasar Baru further down. We knew it was next to the river so we kept following the road until it came to a deadend at Jalan Baru. However the coffee shop there did not seem to fit the description, so on gut feel, we parked the car and walked left, back towards the lane we missed.

Malacca’s riverside is one of the most under-rated sights of the old town. Most tourists, group tours head for the over-crowded and over-rated Jonker stretch. Few move beyond the main drag to explore the river side. Pity, because this is still a working neighbourhood and some of Malacca’s oldest shophouses, still left unpimped and unglam, stand as if it were still in the last century. Some of Malacca’s oldest foot bridges (sadly overly cleaned up and semi-reconstructed) connect Chinatown with this part of the historic centre.

Moreover, the Malaccan city has spruced up the waterway by adding kilometres of boardwalk that link the upper reaches of the city to the river mouth. The boardwalk is a pleasant stroll past the rotting backs of wooden frame houses by the river, where the remnants of mangrove and mud can sometimes throw up surprises: like the 1.2m long monitor lizard we spotted at a muddy bank barely five metres after parking our car. Across the river, the back walls of some shophouses have colourful graffiti-style illustrations sprayed on. The architecture is left intact but the treatment is funky-cute.

Instinct did not fail us. About 200 metres away, the boardwalk emerged into a riverside walk and voila, a pedestrian bridge, earthen jars of flowers, a shop selling birds and there – the corner coffee shop called New Street Teochew Porridge.

No frills, this place sells just Teochew porridge. Manned by an elderly couple with one or two helpers, the system is simple. Tell them if you want porridge or rice and when it’s your turn to order, head to the counter where the dishes are arrayed in mouthwatering variety (below). Point to order.

We tried the ginger and chilli clams, the fried egg with chai poh (preserved radish bits), fried fish slices in ginger and taucheo  (soya bean paste), sambal squid, braised pig innards and best of all, chunks of coagulated pig’s blood. That was really good and even my kids were won over. It was so good we ordered it twice when the first plate ran out. The kids were surprised that there were no drinks available for ordering – it seemed like a simple, small operation – but the food came with a big bowl of lotus root soup which was sweetly flavourful with pork stock.  So we all slurped that instead.

This entry was posted in Malaysia, Travel with kids and tagged boardwalk, Melaka, river, teochew food. Bookmark the permalink.

1 Response to Old-school teochew porridge by the river: Malacca