The white villages of Wuyuan 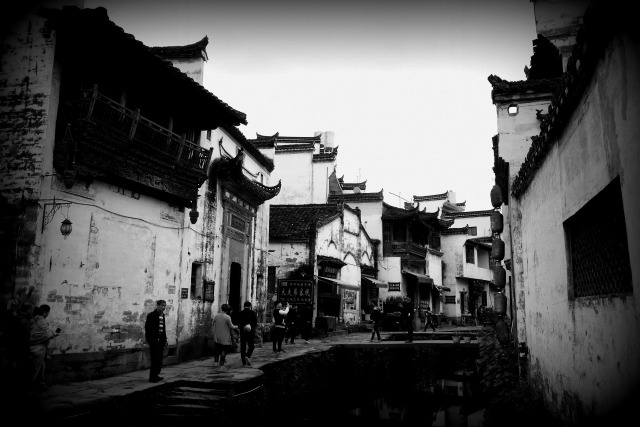 From afar, nestled in fields of bright yellow canola flowers, against a deep blue sky, the white villages stood out. At least, that was the scene I envisioned and read about, and longed to see. Instead I found myself one month out of canola season and right smack in the middle of an erratically rainy spring. Seen through a veil of drizzle, the white villages were no longer that white but rather a muted grey and the fields a feathery dull jade. But the beauty of Wuyuan county’s famed villages did not lie in pastoral scenes seen from afar but rather up close in the rain-slicked blue stone walkways, the iridescent green algae-laced walls and the narrow alleys hemmed in by Qing and Ming mansions. 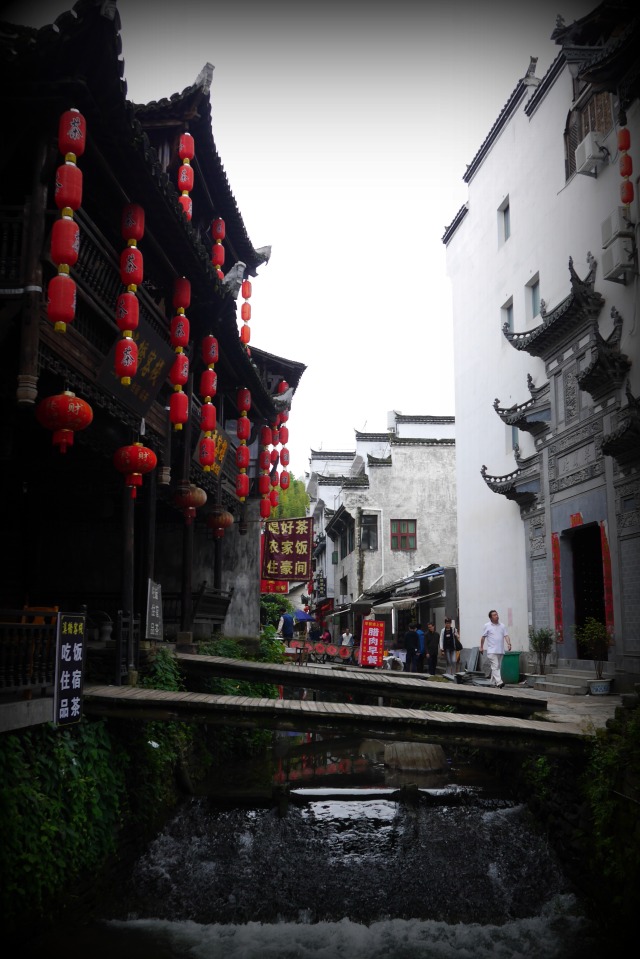 Wuyuan county is famous for its tiny hamlets and ancient towns and villages scattered throughout a countryside of canola and rice fields, framed by gently rolling hills, bamboo forests and rushing rivers. The tourism authorities proudly spin the villages as China’s most beautiful villages.

With a huge domestic market, the tourism machinery is well in place here and sometimes not for the better. For one thing, expect entrance fees to most villages. And with that comes the tourist sprawl with souvenir shops and tea shops and touts everywhere. Be prepared for crowds. You can expect the most picturesque of villages to be on the tourist fixtures and hence, to be most crowded. If you come in mid-March, at the height of canola season, be ready for human gridlock. 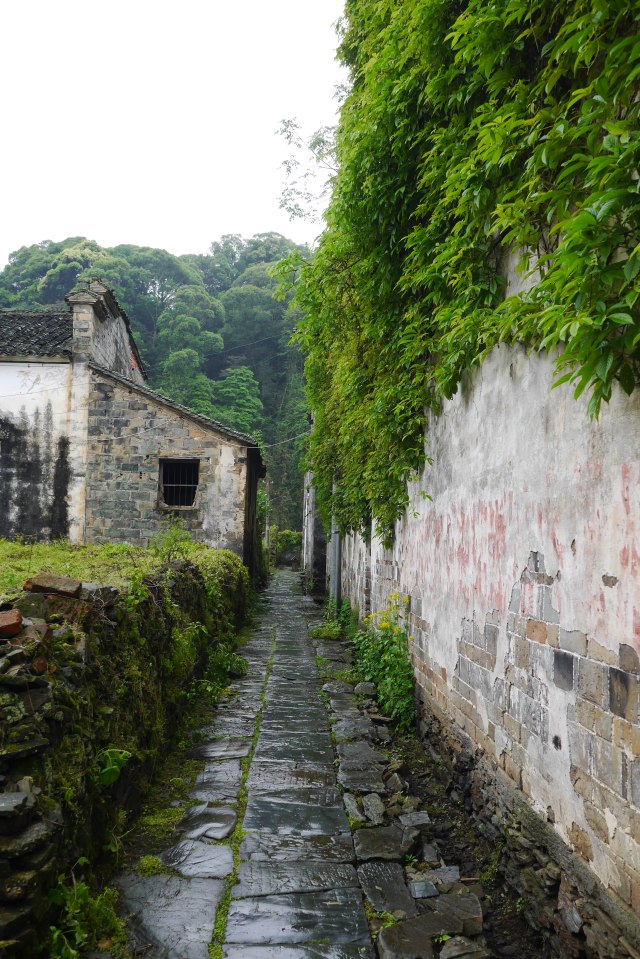 On the first day after arriving, we had half a day to kill. We hired a taxi to bring us to Sixi Yancun, about a 20min drive from the county seat. Yes, we had to pay an entrance fee of 55yuan per head. Typically, as we saw later, most of the ticket centres or ‘tourist centers’ and the parking facilities are set a distance away from the village proper which entailed a walk in or a ride by golf buggy (5yuan per head). This is ideal because then the first introduction to the villages is not marred by a huge commercial centre. At least some tiny level of authenticity is maintained.

Village women moonlighting as guides hang around the carpark lying in wait for tourists. We hired one to bring us around for 20yuan. Her home used to be in the village until recently when the family could afford a newer larger house on the outskirts of the village. There, she rears chickens and a pet rabbit, sharing a plot of land with other villagers to plant canola and other vegetables. When she had finished her chores for the day, the second half would be spent like this – guiding visitors. She wasn’t the most polished of guides and her narration was so practiced that it came out in a swift autopilot torrent of words – half of which my limited Mandarin barely caught. But any language difficulty was easily surmounted with smiles and lots of second-guessing.

Sixi Yancun was actually two villages Sixi and Yancun, each about a km apart from the other. Sixi was not crowded when we visited but we received our fair share of curious stares from the local residents, most of whom were hanging out shooting the breeze at the ancient covered bridge which was the main entrance into the village proper. 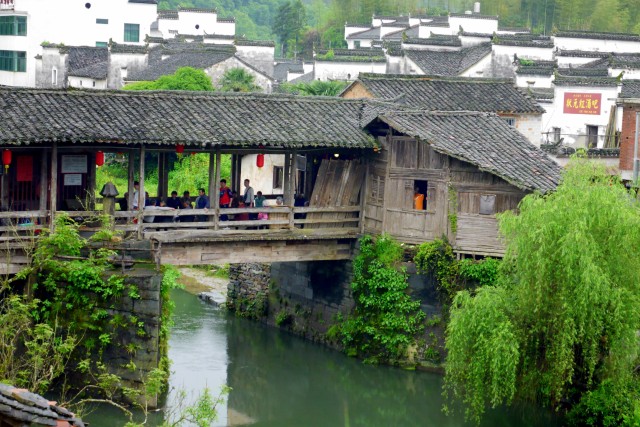 The village was not big, with many of the grand old houses reduced to souvenir pitstops and access limited to just the front courtyard. Our guide was very proud of the fact that Sixi Yancun was the choice location of many Chinese dramas and films. She rattled off a series of titles only to be met with our politely blank looks. We followed the rain-slicked lanes past vegetable patches, makeshift chicken pens, crossed a stream and just like that, the visit was over. It was a bit of an underwhelming introduction to the villages that I had read so much. 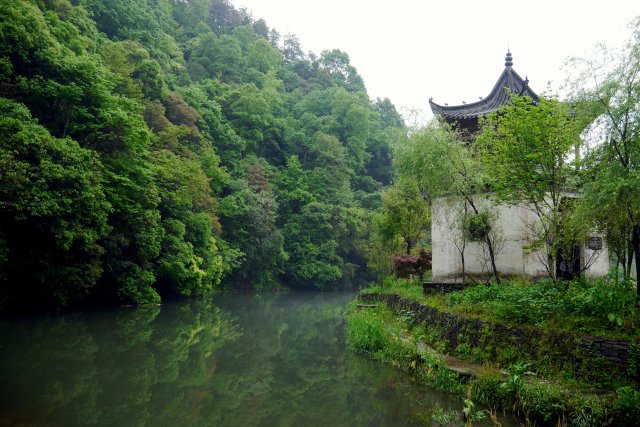 The next day we joined a local day tour. We had signed up for this the day before when we arrived at the railway station. For 230yuan per person, this would include transport, a driver, a guide and entry into four villages. At first we thought this was going to be a big busload of tourists but as it turned out, we only had to share the MPV with another small family of 3 from Guangzhou – a couple with a young three-year-old son.

The tour would take us to four villages on the highly popular  ‘eastern line’. In Wuyuan, the villages were roughly strung out along a ‘northern line’, a ‘western line’ and an ‘eastern line’ with the east being the most popular route among visitors. Villages in the north were the next alternative but were more remote.

We started with Little Likeng, said to be the most picturesque of the villages. It was also the most commercialised and crowded of the villages we saw that day. Every third shop was selling chrysanthemums and green tea leaves. It was hard for me to look beyond the crowds and the souvenirs to see Likeng for its former beauty. She reminded me of a fresh-faced naturally pretty girl dressed up in ill-fitting sequins and a load of make-up – the beauty completely manufactured and the innocence lost. 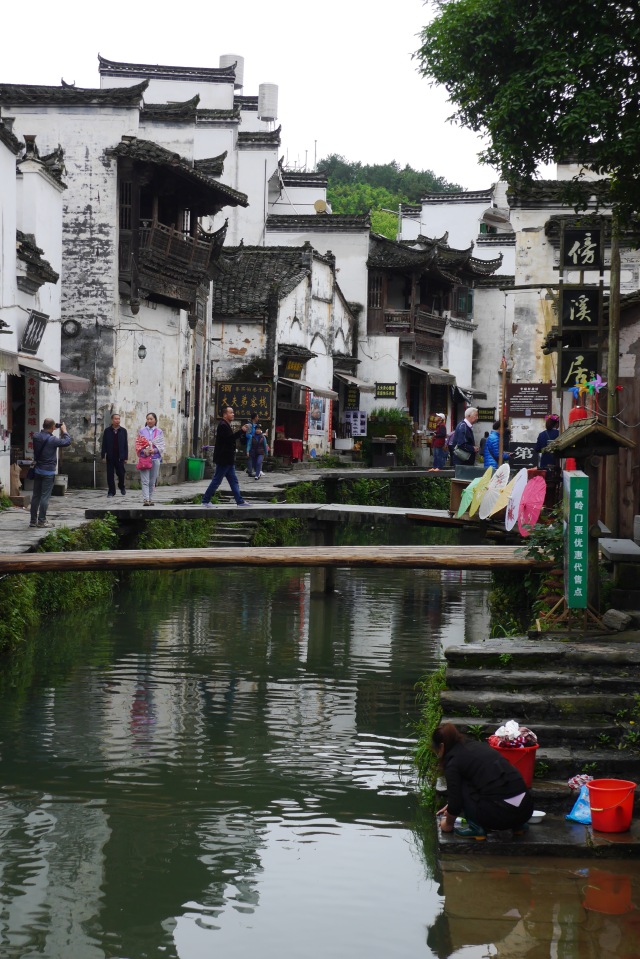 It was only when we moved beyond the main thoroughfare, heading higher into the hills behind the village that a slightly different side of Likeng emerged – one that had us peeking into a pigsty (our first time – gawky city-dwellers that we are!), one where we walked through a bamboo grove, passed a quiet tea house on a hill, observed artists sketching the scene below and admired a small spring with cool clear and clean water. 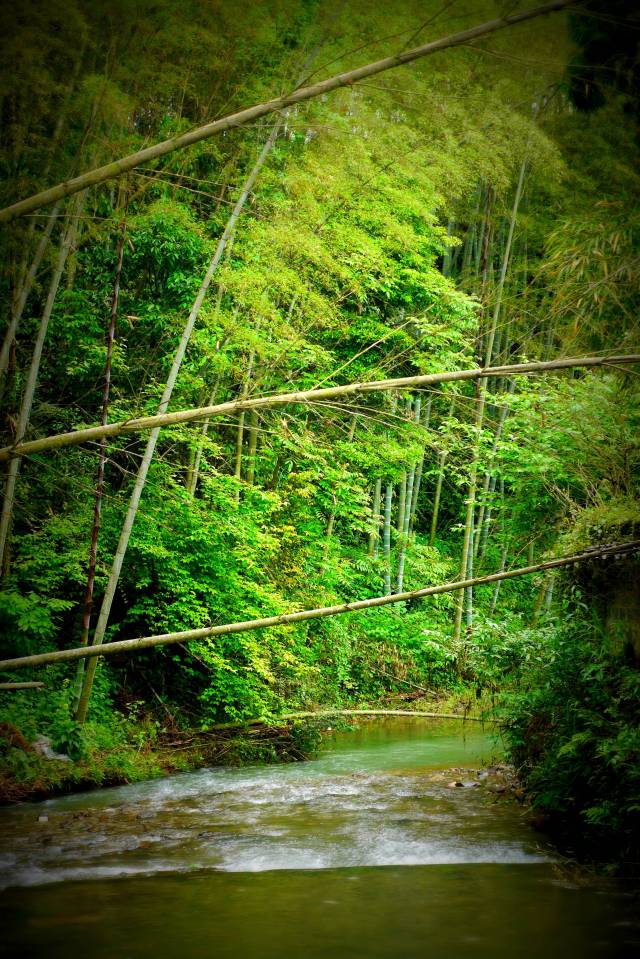 For 10 yuan you could be ferried into Likeng village on a raft poled by boatmen. But we preferred to walk the 500m in, following the stream, fascinated by the sight of a water buffalo ploughing the field, a colourful temple with streamers and an apparent tourist trap and an adorable troop of ducklings.

The other two villages, Jiangwan and Xiaoqi were nondescript so I shall not waste space on this. Jiangwan’s main claim to fame was its role as former President Jiang Jemin’s ancestral seat. Nevertheless, there were some pretty spots in Jiangwan – like this pond and pavilion: 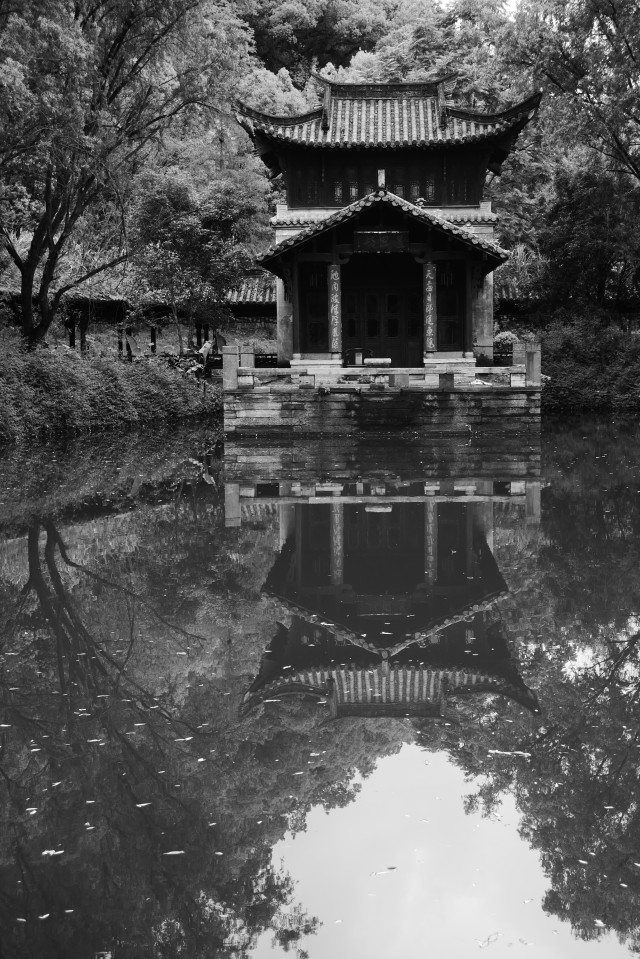 And of course, what was left of the actual house belonging to Jiang Jemin’s forefathers – a now green and overgrown lovely spot where birds trilled and flew about. It gave off the feel of an ancient Roman ruin. Amazingly, there were no crowds here too. (see pic below) 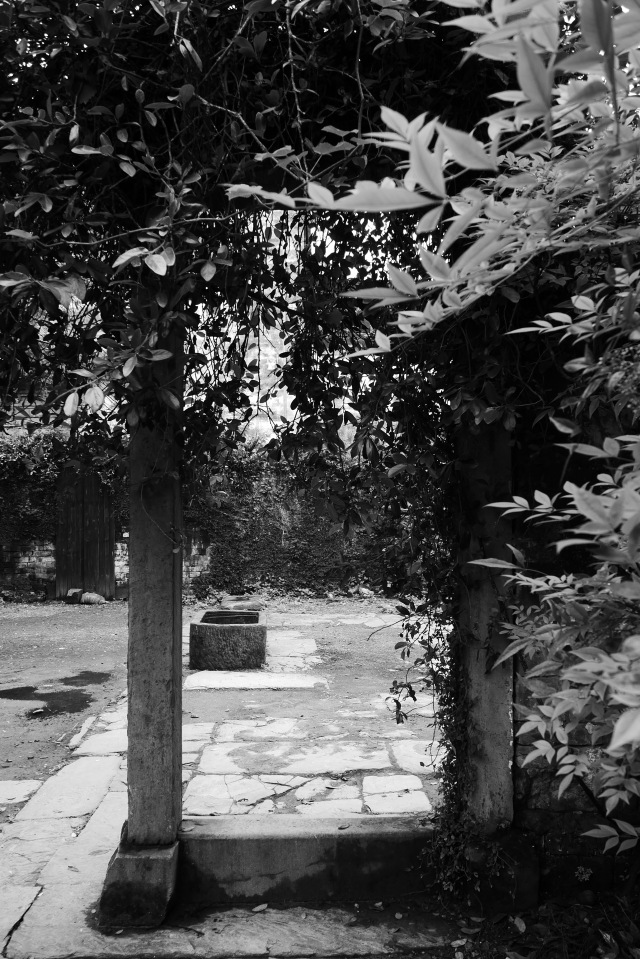 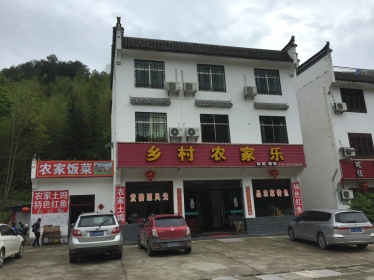 We broke for lunch at a roadside strip of restaurants. Run by farmers, the restaurants were there really to feed the busloads or carloads of tourists. Nonetheless I found it an interesting experience. For one thing, there was no menu. Enter the restaurant via the kitchen where the day’s freshest ingredients are laid out on the table. Pick the ingredients you like and tell the chef how you’d like them done. In this little restaurant, the chef is the sprightly 86-year-old granny (below). 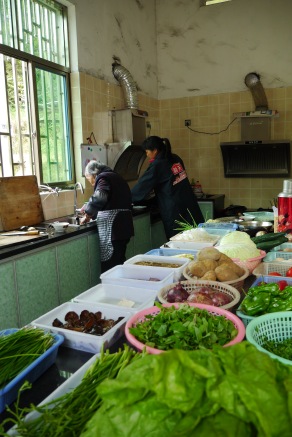 Half of the greens on the table were new to me, so I was at a complete loss for what and how to order. Luckily the Guangzhou couple travelling with us came to the rescue. We assured them we were not picky and left it to them. My only request was for the coagulated globs of pig’s blood- and that turned out to be my favourite dish!

The driver joined us at the table. In between squinting to pick out razor-sharp fine bones from the steamed carp and them coaxing their son to stop playing with the lazy susan, the Guangzhou couple tried to make conversation with us. They nodded approvingly about Singapore, graciously praised our non-existent Mandarin and then at the end of lunch, generously insisted on picking up the tab. The punchline only came at the end, when they said expansively, waving away all our attempts to go Dutch, “It is only right that we give you a treat. After all, you have traveled so far to come home.” Gobsmacked. I know they mean to be kind, but do they generally assume that everyone of Chinese descent belongs to the great motherland?

The last and final village that we visited turned out to be the best of the lot. Wangkou is in such beautiful decay that it deserves a post of its own. 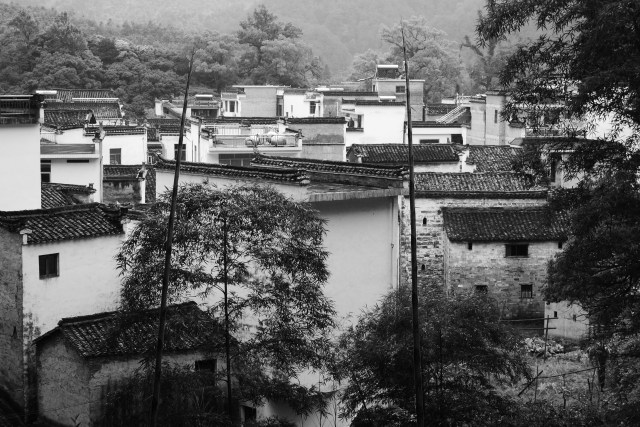