The Tunnels of Zhangbi Village

From this perspective, it looks like any other village in the Chinese countryside – crumbling in a slow decay, its population reduced and largely elderly. This could be anywhere in China. Yet Zhangbi is unique. Beneath its dusty cobbled lanes and rickety houses is a subterranean fortress linked by kilometres of corridors that date from the Tang dynasty. There are intriguing secret doorways and stairways, peepholes and air vents, officers quarters and even stables. In its day, this was a highly sophisticated defense system, a dense network of rooms and passages designed for stealthy attacks as a form of defense.

Yet to me, this ancient fort, probably the only one of its kind in China, is not the real attraction. What I found more interesting is the village itself whose walls and houses have witnessed the passing of the centuries and the dynasties and miraculously still stands today. Yet untouched by the tourism machine, this place still looks the same as it has for the last thousand years. But by the time you read this, Zhangbi may well be on its way to a cosmetic facelift – and in my book, not necessarily for the better! 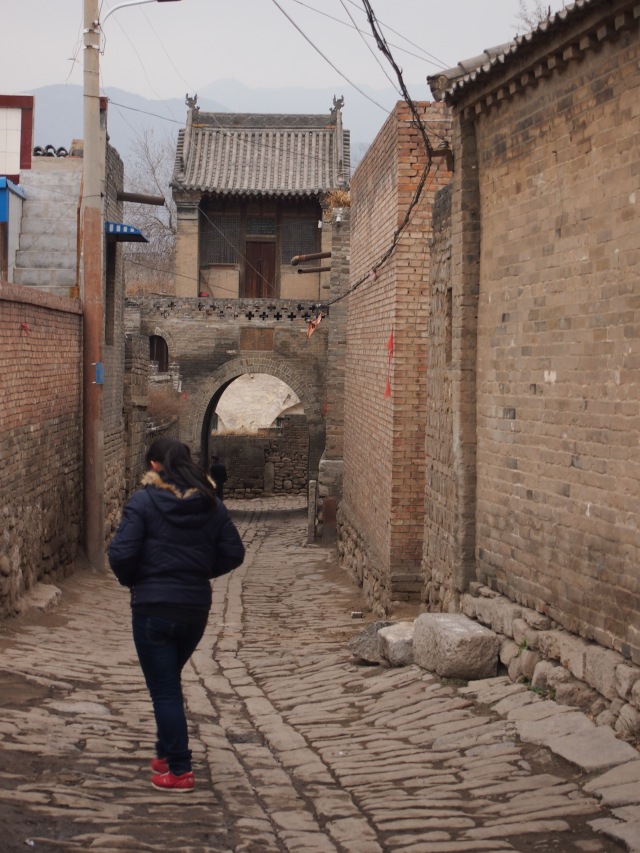 Zhangbi is in all the guidebooks and it is on the internet. Yet for most travelers, this place flies under the radar. There were few visitors the day we went. We were the only foreign visitors. Domestic visitors were not many either.

We spent almost three hours at Zhangbi. The token nod to tourism was a small office and a building that housed new toilets just outside the village walls. We had to have a guide in order to see the tunnels or risk getting lost down there. We opted for an English-speaking guide but in the end, chatted more in Mandarin with her than in English!

As with our other experiences in China, once the Chinese domestic visitors realised that there was a tour in Chinese, the freeloading started. Luckily there were not many people and this was only so in the tunnels. The group disappeared once we exited the tunnels and explored the village.

So old is this village that there are architectural remnants, monuments, tombs, temples and structures that are scattered over the centuries, dating from as far back as the Shang dynasty more than 3000 years ago. So for the longest time, I guess there has always been a Zhangbi village.

Our tour started near the entrance to the village where we visited an old temple, a stage and up on the parapet that linked to the village walls, this simple two-story pagoda (left). On the upper level was a small altar dedicated to the god of scholastic success. With the kids having major exams coming up, I made them go up to give a polite bow.

The guide then led us to an innocuous-looking building where stone steps led downwards into darkness. This was the entry into the underground fortress, or as the Chinese call it – the castle. The Chinese words on the wall read: Ancient Fortress Passageway.

The passageways beneath were cool and surprisingly not too dimly-lit. It wasn’t very wide so we had to walk in single file. We’re not very tall people so the height was fine and we didn’t have to crouch. We were shown where the officers and general’s quarters were, as well as functional spaces like storage, stables for the horses etc. They were mostly small caves and alcoves roughly hewn from the rocky earth. The set of tunnels apparently ran for more than 5km and intersected at various points. Only about 1km of tunnels was actually open. There were three levels but we did not walk through all of them. It all looked the same after a while and I knew that without the guide, we would definitely have gotten lost. Owain the rascal enjoyed leaping about making monster shadows or annoying his siblings with his shadow play antics. Just when the dark and the endless line almost became too much, the last door opened up to bright sunlight and we were out of the tunnels into what used to be someone’s living room in a cave dwelling on the other side of town. The view from there is sprawling. The landscape is wintry bleak and brown but you can clearly see the typically yellow and dusty loess landscape and the cave homes built into the sides of hills. Some livestock were kept in makeshift pens below too.

The dirt path circled us back to the village proper. If you ask me, I no longer really remember the facts and figures of the places I saw. I enjoyed walking around the old village. We hardly saw anyone. The village walls, while not as tall or impressive as the big city walls of Pingyao or Nanjing or Xi’an, were interesting to see. The parapets housed important temples and overlooked residential courtyards, giving us an overview of the village rooftops.

One of the temples we visited was rather curiously named “the Empty King’s Temple”. While the inscription says this structure was built in the Ming dynasty in 1613, another temple had already existed in the same spot even before that. The paintwork while faded and flaky gave a hint into its gloriously-coloured past. A stele, obviously very old, stood forlornly beside the door, inscrutable, protected by perspex. On the roof, an elaborate arrangement of turquoise blue, green and yellow glazed figures of dragons, phoenixes, lotuses, clouds and gods stood sentinel. The details of the carvings of bats and lions on the roof, the tiles and the eaves showed how important a building this was. 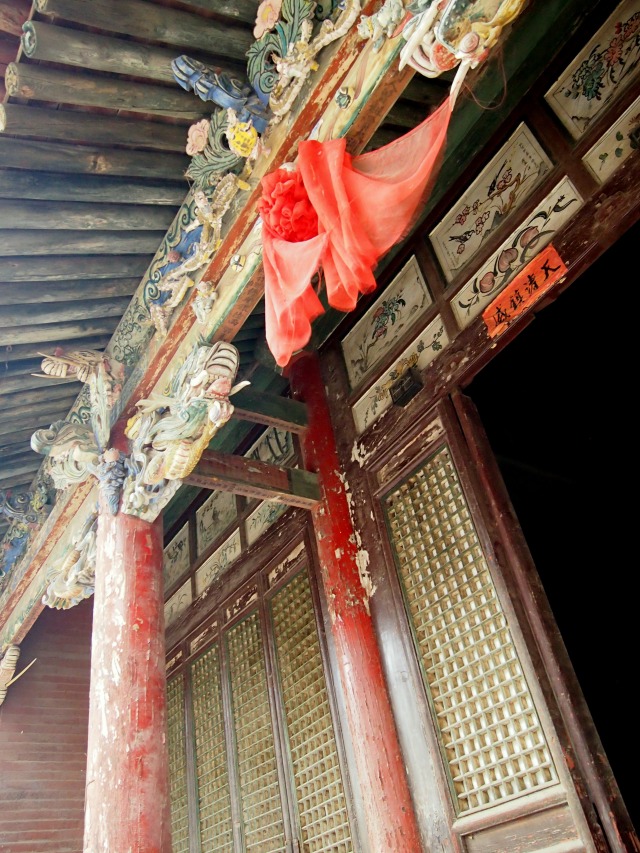 gateways and rooftops: a view from atop the village wall 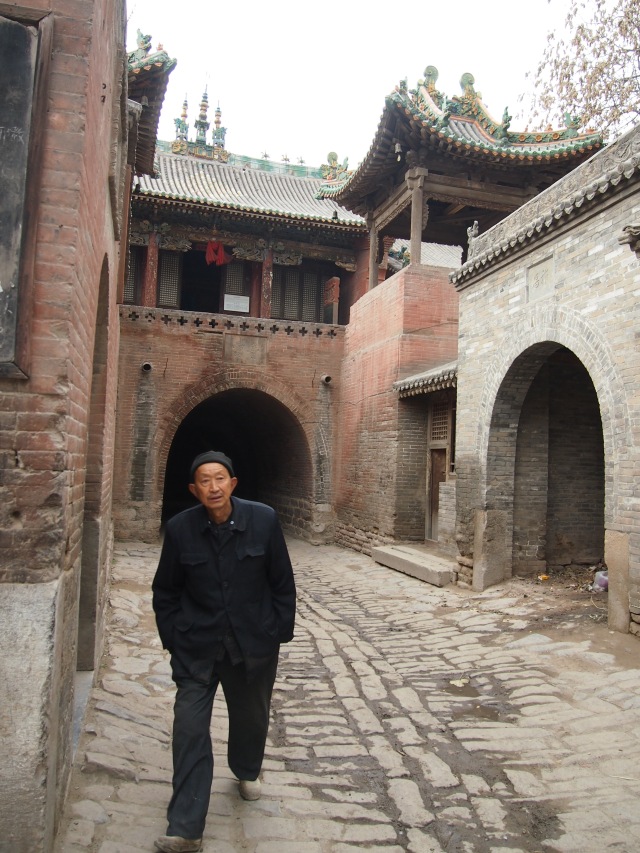 I like noticeboards because they always give insight into what is going on within the community – be it a school, college, church or village. Noticeboards have always been useful in keeping the community informed. In the old days in China, these were avenues where you basically got the news. This was where you learned who was on the wanted list, who had been executed, who had been rewarded, announcements from the government etc.

In one of Beijing’s hutongs, I had seen a brand new noticeboard, made of steel, looking bereft, devoid of news except for one lone sticker advertising a room for rent. Of course with social media so prevalent, who needed a noticeboard?

In Zhangbi, this old discoloured blackboard (below) must have been here for years. On it, smudged and written in chalk, were points discussing the role of religion vis a vis sects, a list of the different types of religion that are accepted in China (one of which was Catholicism!) , the difference between religion and the sects. The last few points gave advice on how to avoid these pitfalls – not to listen, not to believe and not to spread the beliefs propagated by sects, to shatter the reliance on superstitions etc. I don’t know who wrote it but that was a fascinating read! 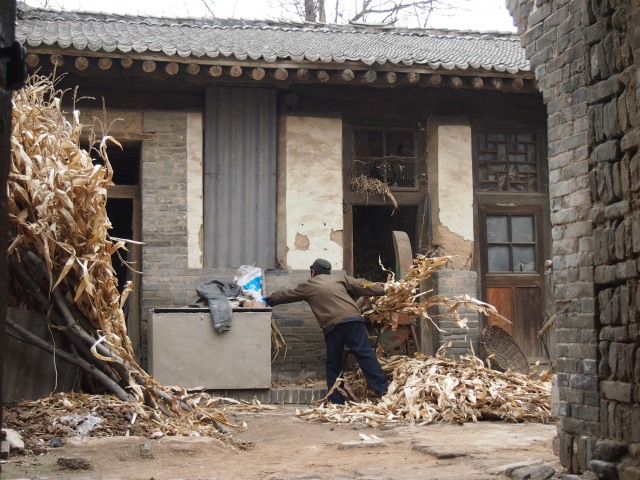 truck, tractor, trike all in one

Progress and development may have passed Zhangbi by for years. But not anymore. The government has built brand new double-storey houses just outside the old village. The villagers have been told to move. Everything, said the guide, is provided – paved roads, water, sanitation, gas, electricity etc. All they needed to do was to pack up and move.

The old village would be ‘preserved’ but ‘renovated’ and ‘improved’ to cater to tourists. Yes, the tourism machine has officially adopted Zhangbi. Some bureaucrat must have seen a cash cow in the village.

If I ever return to Zhangbi, I am not likely to see the wizened tanned faces of the peasants I met, nor will tiny clouds of dust envelope my feet in the unpaved lanes. Mud walls will be replaced by brick or stone. The smooth large stones that pave Zhangbi’s main street will go. The old yellow mongrel will not slink around with his companion the ginger cat. The livestock will go, no one will thresh corn in their yard anymore. I won’t have to skip over small hills of dog and cat poo and crumbling buildings will be re-built (in the authentic style of course!).

Is that a bad thing? Progress should not be bad. Giving the villagers a brand new home with modern amenities cannot be considered negative. Tourists like me who visit a place and long for the ‘charm of the old’ to stay untouched are just there for a few hours or days before we return to our comfortable homes. Hoping that things remain ‘unspoilt’ for our benefit then becomes patronising and selfish. Life changes and only history will make the call if these proposed changes are for the better or worse. 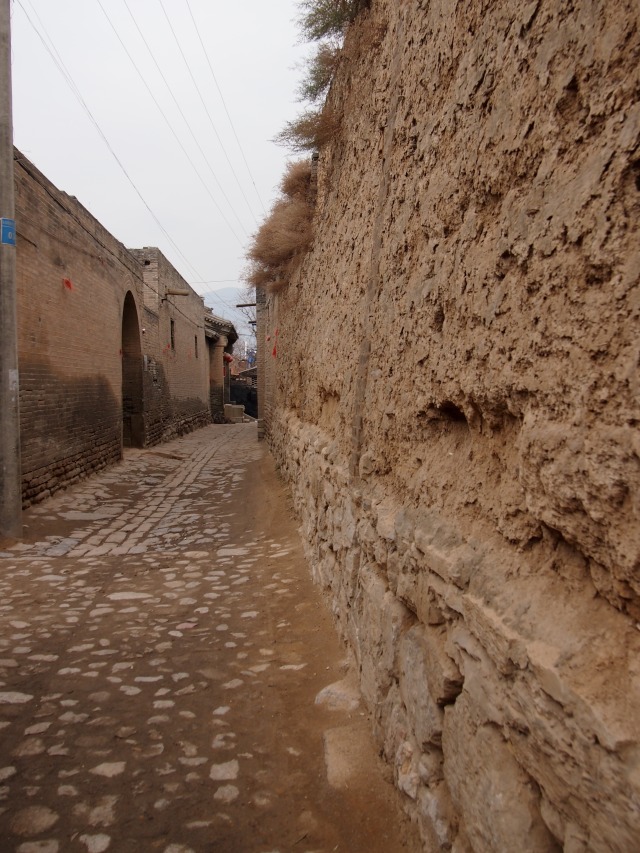 Life for Zhangbi villagers may be materially better in their new homes. I’m just not sure about the quality though, in emotional terms – especially when most of the villagers are elderly and this old village is all they have ever known. I can only hope the government, in ‘restoring’ and ‘preserving’ will do so sensitively with a light hand, that Zhangbi does not end up as a plastic Disneyfied version of what a thousand-year-old village ought to be. But having seen what they are doing to Datong, what they have done to the Yungang grottoes, I am not optimistic. I will be sad to see it go, but glad to have seen it (possibly one of the last). One thing for sure, if the people of Zhangbi have lived here for generations, for so many centuries, despite revolution, wars, natural disasters and changes in ideology, there is likely to still be a Zhangbi here years down the line. 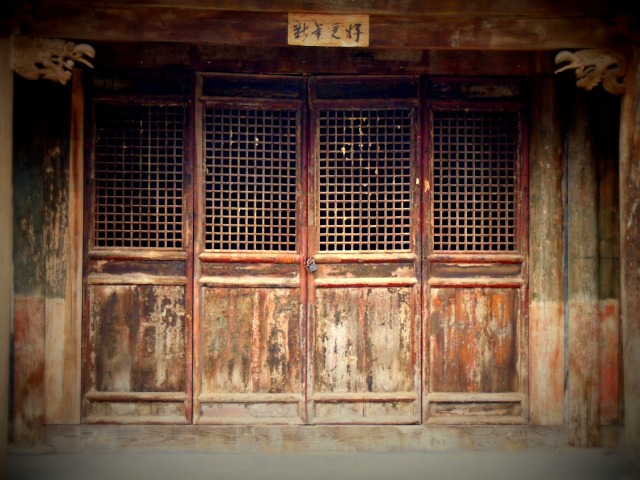 The couplet sums it up best: the new year will be better.